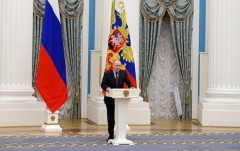 Russian President Vladimir Putin speaks to the press at the Kremlin on Tuesday. (Photo by Mikhail Klimentyev/ Sputnik /AFP via Getty Images)

(CNSNews.com) – Russian President Vladimir Putin said Tuesday that Moscow recognizes the Donetsk and Luhansk “people’s republics” within the borders laid out in their respective constitutions – borders that encompass territory not currently under the separatists’ control.

The confirmation by Putin, during a press conference at the Kremlin, adds to fears of a potentially deeper incursion into Ukrainian territory, in the light of his decision to order Russian troops into the self-proclaimed Donetsk People’s Republic (DPR) and Luhansk People’s Republic (LPR), purportedly to “maintain peace.”

The DPR and LPR comprise only portions of the Donetsk and Luhansk regions of eastern Ukraine, the rest of which are under the control of central government forces, but claimed by the separatists.

Putin said Russia’s recognition of the DPR and LPR “means we have recognized all their founding documents, including the constitution, and the constitution enshrines … the borders of the Donetsk and Luhansk regions when they were part of Ukraine.”

He added that Russia hoped the territorial disputes would be resolved in talks between Kyiv and the heads of the two entities, although he conceded that was now impossible since hostilities between the sides were ongoing and even escalating.

“But hopefully, in the future, that’s what will be done.”

The Ukraine government has consistently refused to negotiate directly with the rebels, on the grounds doing so would amount to an acknowledgement of the political legitimacy of what it views as no more than Russian proxies.

A 2019 map shows borders of the Luhansk and Donetsk regions of Ukraine, and the territory controlled by the separatists. (Map: Ukraine National Security and Defense Council / IACA)

With regard to the deployment of Russian forces into Donetsk and Luhansk, Putin recalled that the agreements signed with the two “republics” included military assistance.

“And since there is a conflict we made clear with this decision that, if need be, we are ready to exercise the obligations we assumed.”

Putin’s recognition of the “independence” of not just the separatist entities as they stand but of the broader territory they claim is the latest in a series of escalatory steps watched with dismay by the West.

The U.S. and allies believe the buildup of more than 150,000 Russian troops and armaments near Ukraine’s borders is in preparation for a full-fledged invasion.

In remarks at the White House on Tuesday announcing sanctions on Russia, President Biden noted that Putin is now asserting that the regions Russia has recognized include “large areas currently under the jurisdiction of the Ukraine government.”

“He’s setting up a rationale to take more territory by force, in my view,” Biden said, describing Putin’s actions “the beginning of a Russian invasion of Ukraine.”

On Tuesday, Ukrainian President Volodymyr Zelensky said he was considering a request from his foreign ministry to formerly sever diplomatic relations with Moscow in the light of the crisis.

Kremlin spokesman Dmitry Peskov said in response such a move would be “extremely unwelcome” and only make things more difficult for the two countries and their people.

At his press conference, Putin in response to a question laid out what Russia expects from Ukraine before relations between the two neighbors can return to normal. He stipulated three conditions, none of which are likely ever to be acceptable to the government in Kyiv – or many of its Western supporters.

--Ukraine would have to accept the loss of Crimea, which was annexed by Russia in 2014 after a referendum in which a large majority supported the move. No-one forced the people of Crimea to vote the way they did and their will should be respected, he said, adding that a referendum was “the highest form of democracy.”

--Ukraine would have to renounce its desire to join NATO, a move that Putin said Russia regards as a threat and strongly opposes. He said that that if Kyiv took the initiative to withdraw its request for membership in the alliance, that would enable the West to “save face.”

--The West would have to stop arming Ukraine, which “to a certain extent” would need to be demilitarized. Putin said that if that wasn’t done, Kyiv could simply shift direction at any moment and disavow former agreements, “and we would be left with a country armed to its teeth, that has anti-Russian sentiments.”

At a joint press appearance, he used the opportunity to defend Russia’s relationships with former Soviet states – Azerbaijan is one – saying Moscow respects their sovereignty but the situation with Ukraine was different, since it is being used by outside powers to threaten Russia.

“After the breakup of the Soviet Union, Russia recognized all the new geopolitical realities, and, as you know, it is working actively to strengthen our interaction with all the countries, the independent states that emerged in the post-Soviet space,” he told Aliyev.

Putin said the interaction with Ukraine had disappeared after what he described as the “coup” in 2014 – when massive street protests met by a deadly crackdown on demonstrators prompted parliament to oust Moscow-friendly President Viktor Yanukovych.

“The situation with Ukraine is different, and this is related to the fact that the territory of this country is, unfortunately, used by third countries to create threats against the Russian Federation,” he said.