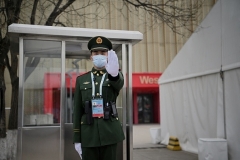 A paramilitary police officer at the entrance of at ice hockey arena in Beijing that will be used during the 2022 Winter Olympics. (Photo by Noel Celis/AFP via Getty Images)

(CNSNews.com) – The world said “never again” after the Holocaust, but 80 years later, with genocide determined to be happening in China’s Xinjiang region, the world is preparing to celebrate next year’s Winter Olympics in Beijing, a rally on the National Mall heard on Tuesday.

“We said ‘never again,’” said Women’s Rights Without Frontiers president Reggie Littlejohn, one of the rally organizers. “What does ‘never again’ mean?”

Activists are calling for a boycott of the 2022 games – or that they be moved to a host city outside China – because of atrocities against Uyghurs and other minority Muslims in Xinjiang, which the U.S. government has determined constitute genocide and crimes against humanity.

Littlejohn, whose organization campaigns against abuses and coercion in Beijing’s population-limitation programs, spelled out some of the recorded violations taking place in Xinjiang.

“Forced abortion, forced sterilization, forced – infanticide, forced labor, removing parents from their children, and putting between one and three million people in concentration camps, and possibly harvesting their organs for transplant,” she charged.

“What more does it take to say that it’s not okay for them to have the honor of hosting the Olympics?”

Littlejohn said genocide isn’t punished by “celebrating the Olympics of the soil of the country” where it is being perpetrated.

Former U.S. ambassador-at-large for international religious freedom Sam Brownback told the rally he supported moving the games to another venue – something that would be hard, but not impossible to do.

“We will not do Olympics in a place that is actively conducting a genocide. We will not do it as a world community,” he declared. “We will not participate when somebody is doing something of that magnitude, that horrific in the world today – and we know it.”

“What will it say about the world if we have the games in a country that is conducting an active genocide, that is doing the level of persecution of the Chinese Communist Party today?” asked Brownback, a Republican former senator and governor of Kansas. 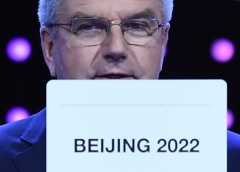 Calls for a boycott or venue change have come from scores of rights advocacy groups, and on Capitol Hill from lawmakers on both sides of the aisle, including Speaker Nancy Pelosi, Republicans and Democrats on the House Foreign Affairs Committee, and a group of GOP senators in a resolution saying the event should be hosted by “a country that recognizes and respects human rights.”

“No matter how some in the U.S. go to great lengths along its misguided course to hype up lies on Xinjiang, their political conspiracy to disrupt Xinjiang and contain China will only end up in failure.”