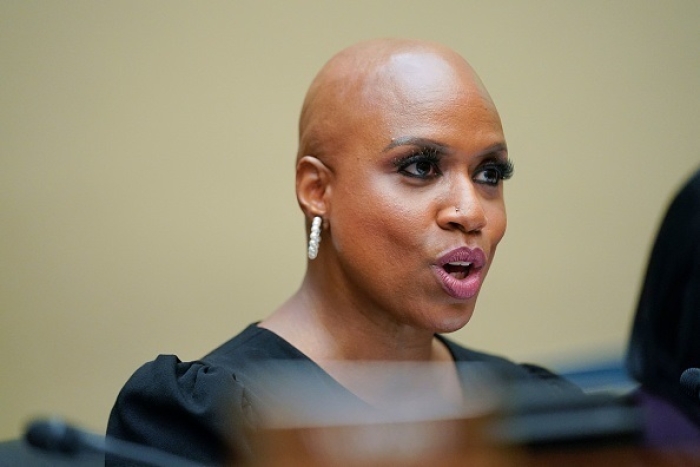 (CNSNews.com) – Rep. Ayanna Pressley (D-Mass.) said Thursday she voted against a measure this week creating a bipartisan select committee on the security, economic, and technological challenges posed to the U.S. by the Chinese Communist Party (CCP) because it will “embolden anti-Asian rhetoric and hate.”

“I voted ‘no’ because, again, it’s a – it’s a – another sham effort here, it’s really clear that this is just a committee that would further embolden anti-Asian rhetoric and hate and put lives at risk,” Pressley told CNN.

“We have enough infrastructure and governance to tackle those issues and we don’t need this select committee, and that is why I voted ‘no,’ because I am afraid that it will embolden anti-Asian rhetoric and hate.”

Pressley, a leftist member of the so-called “squad,” was one of 65 Democrats to vote against the resolution creating the “Select Committee on the Strategic Competition between the United States and the Chinese Communist Party.”  Another 146 of her party colleagues voted with 219 Republicans to pass it.

Asked if she thought the 146 Democrats who voted in favor were wrong, she replied, “we just see it differently.”

Of the CPC’s 100 members, only just over half voted against the resolution.

Of note was a “yes” vote from Rep. Ilhan Omar (D-Minn.), an outspoken critic of the CCP’s treatment of minority Muslim Uyghurs in Xinjiang, which the Biden and Trump administrations determined constitutes genocide and crimes against humanity.

Tlaib charge that the committee under GOP control “will inevitably be racialized” and become “another platform for hateful rhetoric that puts our communities at risk.”

“We need a serious national conversation on China policy – not more xenophobia, Cold War posturing, and scapegoating from the GOP,” tweeted Bowman. “Why would anyone trust them to lead responsibly on this important issue?”

Twenty-three of the CPC members who voted against the resolution put their name to a statement, released by caucus chair Rep. Pramila Jayapal (D-Wash.), reiterating their concerns about anti-Asian sentiment.

“This also should not be a committee about winning a ‘new Cold War’ as the chair-designate of the committee has previously stated,” they said, referring to Rep. Mike Gallagher (R-Wisc.), who has been selected by Speaker Kevin McCarthy to chair the committee.

“America can and must work towards our economic and strategic competitiveness goals without ‘a new Cold War’ and without the repression, discrimination, hate, fear, degeneration of our political institutions, and violations of civil rights that such a ‘Cold War’ may entail,” the 23 left-wing Democrats said.

Like the progressive caucus, Congressional Asian Pacific American Caucus (CAPAC) was divided over the formation of a select committee focused on the CCP.

CAPAC chair Rep. Judy Chu (D-Calif.) warned during the debate that the committee “should not be used as an open invitation to traffic in blatant xenophobic, anti-China rhetoric we know results in physical violence against Asian Americans.”

Chu and several other members of the small caucus voted against the resolution, but others supported it, including Reps. Ro Khanna (Calif.), Andy Kim (N.J.), Raja Krishnamurthi (Ill.), Ed Case (Hawaii), and Ami Bera (Calif.).

Chu issued a statement afterwards that reiterated her concerns about “xenophobic rhetoric” but said that CAPAC “remains neutral” with regard to the creation of the committee.

“As the House of Representatives embarks on the formation of this committee, CAPAC reminds all members that this committee should not be used as an open invitation to engage and traffic in blatantly xenophobic anti-China rhetoric that we know historically results in physical violence and emotional harm against Asian Americans across the country,” Chu said.

The resolution creating the select committee allows for a maximum of 16 members, seven of whom will be from the minority party.

NBC News reported Thursday that some prominent Asian-American Democrats were vying for the top minority slot on the committee, including Khanna, Kim, and Krishnamurthi.

“We want serious lawmakers [on the committee],” McCarthy said during the debate ahead of Tuesday’s vote. “This isn’t for someone to go in and go viral because they want to make a point. This is for us to work together, as one Congress, with one of our greatest challenges for the future.”

Gallagher pledged that “at every step along the way,” the committee would focus on the CCP, not on the Chinese people – “with whom we have no quarrel and who are often the primary victims of CCP aggression and repression.”