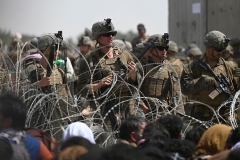 (CNSNews.com) – Assessing two days of congressional testimony on the withdrawal from Afghanistan, Rep. Mike Gallagher (R-Wisc.) on Thursday challenged the notion that the operation had been a “logistical success,” saying that while he expects “spin” from President Biden he does not expect it from the nation’s top military leaders.

During this week’s Senate Armed Services Committee hearing, Joint Chiefs of Staff Gen. Mark Milley was asked about Biden’s use of the term “extraordinary success” a month ago to describe the evacuation mission from Kabul airport.

“Would you use the term ‘extraordinary success’ for what took place in August in Afghanistan?” Sen. Dan Sullivan (R-Alaska) asked him.

Picking up on a phrase that had been used earlier by another GOP senator, Milley said the evacuation mission from Kabul effort had been “a logistical success but a strategic failure.”

Later in the hearing, Milley said that “strategic failure” referred to the 20-year war.

“The outcomes in a war like this, an outcome that is a strategic failure – the enemy is in charge in Kabul, there’s no way else to describe that. That outcome is the cumulative effect of 20 years, not 20 days,” he said. “And there are a huge amount of strategic, operational and tactical lessons that need to be learned from this.” 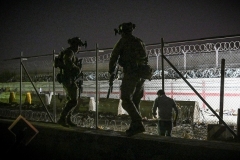 Coalition soldiers secure a section of perimeter fence at Kabul airport during the August evacuation mission. (Photo by Wakil Kohsar/AFP via Getty Images)

Gallagher, a veteran who served in Iraq as a U.S. Marine intelligence officer, focused on the “logistical success” assertion.

He said in a video clip that Milley, as well as Defense Secretary Gen. Lloyd Austin and U.S. Central Command Commander Gen. Kenneth McKenzie, had essentially said “our job was successfully executed – we got 124,000 people out of there.”

Apart from real concerns about how those evacuees were prioritized, he said – noting that there have been “significant problems with certain people we got out” – Gallagher listed other troubling elements of the closing days of the U.S. military presence in Afghanistan.

“The U.S. military, and the country generally, humiliated in the eyes of the world – the Chinese Communist Party is exploiting our humiliation,” Gallagher continued. “Hundreds if not thousands of Americans left behind enemy lines. Tens of thousands of our Afghan allies, basically left to die at the hands of the Taliban.”

“Ten civilians slaughtered in an erroneous drone strike – U.S. drone strike. And of course, 13 American service members dead that did not need to die.”

“How can you spin that as a success?” he asked. “If that’s a success, then what the hell does failure look like?”

Gallagher said the point was not “to crucify someone in a public hearing or blame this or that general. It’s to understand where we went wrong and the nature of our mistakes, so that we don’t repeat them again.”

“I expect our president to try and spin this and to lie to us about this, right?  He’s a career politician, it’s in his DNA,” he said.

“But I don’t expect that from our general officer class. I expect candor. I expect brutal honesty. And to say that this was somehow an operational or a logistical success is simply wrong. It’s not honest, and the American people don’t buy it. They won’t accept it, and they’re going to demand better.”