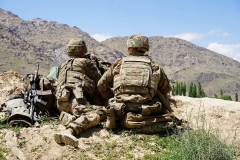 (CNSNews.com) – President Trump said on Sunday night the intelligence community had not found claims that a Russian military intelligence unit paid terrorists in Afghanistan to kill U.S. troops to be “credible,” and had therefore not reported the allegations to him or Vice President Mike Pence.

The president has been under fire over the weekend over the allegations, first reported by the New York Times on Friday, with some senior Republican lawmakers also pressing the White House for answers, urging it to take the reports seriously.

Trump’s Sunday night tweet was a response to one such comment of concern, from Sen. Lindsey Graham (R-S.C.)

The Times reported that U.S. intelligence officials concluded “months ago” that a Russian GRU military intelligence unit offered rewards to the Taliban to kill coalition and American troops in Afghanistan last year.

It said Trump was briefed and the National Security Council had discussed the matter in late March, but that the White House had yet to authorize any of a range of proposed response options.

Graham, a Trump ally who chairs the Senate Judiciary Committee, was among several leading Republicans to voice concern about reports that Russian agents had offered financial inducements for attacks on U.S. personnel:

“Imperative Congress get to the bottom of recent media reports that Russian GRU units in Afghanistan have offered to pay the Taliban to kill American soldiers with the goal of pushing America out of the region,” he said. “I expect the Trump administration to take such allegations seriously and inform Congress immediately as to the reliability of these news reports.”

In response, Trump tweeted, “Intel just reported to me that they did not find this info credible, and therefore did not report it to me or @VP.”

He reiterated his own earlier suggestions that the Times reports were false.

In a weekend follow-up report the Times said special operations forces and intelligence officers had alerted their superiors last January, after “a large amount of American cash” was recovered during a raid on a Taliban outpost, and following information obtained during the interrogation of “captured militants and criminals.”

The reports cited anonymous “officials briefed on the matter” and “officials familiar with the intelligence.”

Graham was not alone among GOP lawmakers in speaking out.

Rep. Liz Cheney (R-Wyo.), the third-ranking Republican in the House, tweeted, “If reporting about Russian bounties on U.S. forces is true, the White House must explain: 1. Why weren’t the president or vice president briefed? Was the info in the PDB? 2. Who did know and when? 3. What has been done in response to protect our forces & hold Putin accountable?”

(The PDB, president’s daily brief, is a summary of intelligence information and analysis relating to national security, coordinated by the Office of the Director of National Intelligence. DNI John Ratcliffe tweeted that reports on an alleged briefing of the president and vice president were “inaccurate.”)

The ranking Republican on the House Foreign Affairs Committee Michael McCaul (R-Texas), said that if the reports about the Russian activity were true, “it would only deepen my grave concerns about the Putin regime’s malicious behavior globally.”

“From invading Ukraine, propping up dictators around the world and interfering in U.S. and European elections, the Putin regime has shown time and again it cannot be trusted and is not our friend,” he said.

McCaul said he had immediately contacted the administration about the reports, “and will be talking with them in the very near future.”

“If accurate, the administration must take swift and serious action to hold the Putin regime accountable.”

‘The Islamic Emirate is not a tool of anyone’

The Russian government denied any knowledge of the alleged bounty operation, accusing U.S. intelligence agencies of leaking fabricated information in a bid to set back the Afghan peace process.

The Taliban in a statement rejected the notion that it would need any outside incentive to carry out attacks, saying it was sufficiently well-armed in its 19-year “jihad” with weapons already in Afghanistan or those seized from the enemy during battles.

“We reassure our nation and the entire world that the Islamic Emirate is not a tool of anyone nor is it employed for foreign agendas rather it has sacrificed to protect its religion, land and greater interests and has accomplished everything with its own hands and initiative,” said spokesman Zabihullah Mujahid.

“Islamic Emirate” is the label the terrorist group has used for itself since it seized control of most of Afghanistan in the 1990s. U.S.-led forces toppled the regime after its al-Qaeda allies attacked America on Sept. 11, 2001, and the war has dragged on ever since.

For years before running for the presidency Trump called for U.S. troops in Afghanistan to return home, and while campaigning he pledged to end foreign wars. The U.S. and Taliban signed a peace agreement last February, paving the way for the withdrawal of U.S. forces, in parallel with intra-Afghan negotiations designed to end the conflict.

A gradual drawdown of U.S. troops is on track, although senior U.S. military officers have voiced skepticism about the Taliban’s willingness to sever ties with al-Qaeda, a key element of the agreement.