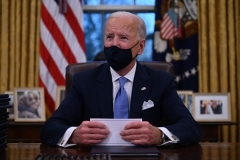 President Joe Biden prepares to sign a stack of executive orders, in the Oval Office on Wednesday. (Photo by Jim Watson/AFP via Getty Images)

(CNSNews.com) – In a letter to U.N. leaders Wednesday, President Joe Biden retracted his predecessor’s intent to withdraw from the World Health Organization, saying that the U.N. health agency “plays a crucial role in the world’s fight against the deadly COVID-19 pandemic as well as countless other threats to global health and health security.”

“The United States will continue to be a full participant and a global leader in confronting such threats and advancing global health and health security,” Biden wrote to U.N. Secretary-General Antonio Guterres and WHO Director-General Tedros Adhanom Ghebreyesus.

Earlier, Biden signed an executive order on a “unified and effective” government response to the coronavirus pandemic and on providing U.S. “leadership on global health and security,” which referred among other things to “engaging with and strengthening the World Health Organization.”

President Trump began the process of withdrawing from the Geneva-based WHO last summer, a move that was scheduled to have taken effect in July 2021 had he won a second term.

He accused the agency of essentially kowtowing to China over its early response to the outbreak that emerged in Wuhan in late 2019. Critics noted that Tedros repeatedly praised Beijing’s handling of the crisis – despite accusations that it reacted sluggishly, attempted to censor and punish those who first warned about the outbreak, and for delayed by months international efforts to investigate the source of the virus.

The prospect of losing its biggest funder unnerved the WHO and its supporters. For the 2018-19 biennium, U.S. assessed and voluntary contributions together accounted for almost 16 percent of WHO’s overall budget.

“Supporting the WHO is absolutely critical to the world’s efforts for a better coordinated response against COVID-19,” his spokesman, Stéphane Dujarric, said on Wednesday evening. “Now is the time for unity and for the international community to work together in solidarity to stop this virus and its shattering consequences.”

At her first White House briefing on Wednesday evening, White House press secretary Jen Psaki said the administration was not wasting any time re-engaging with the WHO.

A WHO executive board meeting is underway in Geneva this week, and Psaki said a U.S. delegation, headed by Dr. Anthony Fauci – now chief medical advisor to the president – would take part, remotely, on Thursday.

The U.N’s Dujarric also referred to plans by the Biden administration to join the WHO-backed COVAX program, a financing instrument that aims to provide access to COVID-19 vaccines for low- and middle-income countries.

“With vaccines being a critical tool in the battle against COVID-19, the United States joining and supporting the COVAX facility will give momentum to efforts to ensure equitable access to vaccines for all countries,” he said.

Biden had not previously committed to joining COVAX, but on Tuesday his nominee for secretary of state, Tony Blinken, indicated that the incoming administration would do so.

“We believe strongly that we can do that – ensure that every American gets the vaccine, but also help make sure that others around the world who want it have access to it,” Blinken said during his Senate Foreign Relations Committee confirmation hearing.

The U.S. and Russia are the only major countries not to have joined COVAX up to now. Canada and European nations are currently among major funders. Tedros said in November COVAX needed another $4.2 billion in funding over the following two months, and an additional $23.9 billion in 2021.

The initiative’s ambitious goal is to deliver two billion COVID-19 vaccine doses by the end of this year, with all participating countries receiving them in numbers proportional to their populations, and health workers and the elderly and vulnerable being prioritized.

More than 46 million doses of COVID-19 vaccines have been administered to date, virtually all in wealthier countries. Tedros early this week voiced dismay about disparities in the rollout.