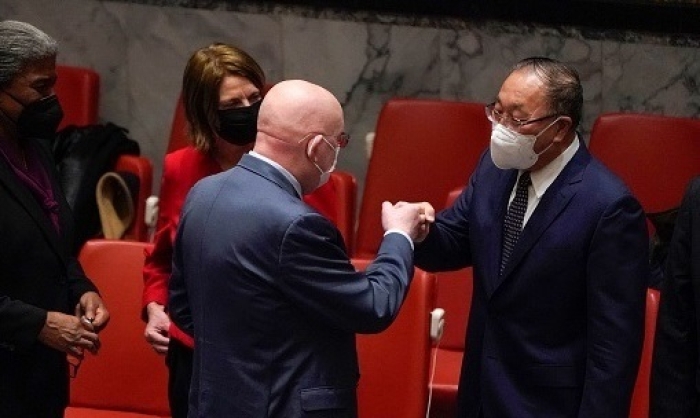 Russian Ambassador to the U.N. Vassily Nebenzia gives his Chinese counterpart, Zhang Jun, a fist bump in the Security Council chamber. (Photo by Timothy A. Clary/AFP via Getty Images)

(CNSNews.com) – Since mid-2006 the U.N. Security Council has – unanimously – adopted a raft of Security Council resolutions on North Korea, nine of which prohibited ballistic missile launches. That 15-year run came to an end on Thursday, when China and Russia jointly vetoed a measure responding to a series of launches by the Pyongyang regime since the beginning of 2022.

Their decision to do so was the latest illustration of gridlock in the world body’s most powerful organ, as Moscow and Beijing work together to counter U.S.-led efforts to enforce international norms, including through the use of sanctions.

Since the start of this year, North Korea has carried out more than 20 missile launches, including several involving intercontinental ballistic missiles (ICBMs). Almost all of those launches were prohibited under nine Security Council resolutions passed, with Russian and Chinese support, between 2006 and 2017.

The last of those nine previous resolutions (2397), adopted unanimously in December 2017 amid heightened tensions over missile and nuclear provocations, stated clearly that any additional tests of nuclear weapons or longrange ballistic missiles would trigger further restrictions on the regime.

That commitment in the resolution was not tested over the years following, however, because Kim Jong Un declared a moratorium on long-range missile launches, in the lead up to his summit with President Trump in Singapore in mid-2018.

With the moratorium in shreds since early this year, the pledge in resolution 2397 is now being put to the test, and Russia and China have balked.

They pushed this week for the council to adopt a “presidential statement” rather than a new resolution, and Russian Ambassador Vassily Nebenzia and his Chinese counterpart Zhang Jun attributed their vetoes to the fact the U.S. had not heeded the request.

U.S. Ambassador to the U.N. Linda Thomas-Greenfield pointed out that after previous launches this year, the U.S. had proposed statements in response, only to be told “that any such statement could lead to escalation or destabilize the Korean peninsula.”

“In fact, the exact opposite has happened,” she said. “The DPRK has taken the council’s silence as a green light to act with impunity and escalate tensions on the peninsula.” 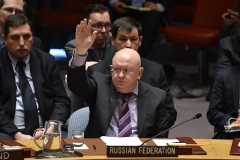 Zhang said China’s voting position is based on its assessment of whether a proposed text helps to maintain peace and security. There was nothing in the Security Council rules to oblige China to align itself with the U.S., he said.

Thomas-Greenfield responded by saying China was not being asked to align itself with the U.S., “but to support Security Council resolutions that they have already agreed to.”

Apart from Russia and China casting vetoes, all 13 other council members voted in favor of the measure.

After the meeting Thomas-Greenfield, joined by her Japanese and South Korean counterparts, read out a joint statement expressing regret at the vetoes.

“The failure to adopt a new resolution undermines the Security Council’s previous actions to which they’ve agreed unanimously, and will only embolden the DPRK to conduct further provocations,” she warned.

“These tests are dangerous. They are destabilizing. They are a clear violation of multiple Security Council resolutions and seek to undermine the global nonproliferation regime. They pose a threat not just to the DPRK’s neighbors, but to the entire world.”

During the meeting earlier, Thomas-Greenfield said the U.S. government has assessed that North Korea has carried out 23 missile launches this year, including six ICBM launches, and was “actively preparing to conduct a nuclear test.”