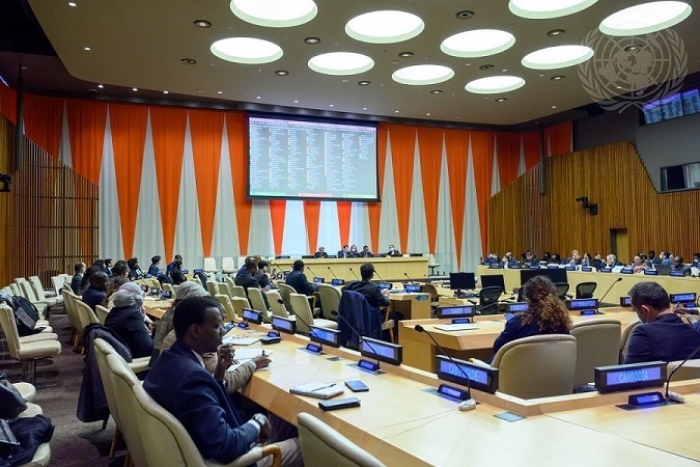 (CNSNews.com) – Democracies rallied in New York on Wednesday to prevent Russia from obtaining a seat on the governing bodies of U.N. agencies focusing on the rights of women and children.

But while Russia was also denied a seat on a influential committee that accredits non-governmental organizations (NGOs) at the world body, a number of other repressive regimes did win seats on that committee, prompting dismay from the United States’ representative.

In a series of secret ballot elections, Russia’s bids for a three-year term on the executive boards of the U.N. children’s agency UNICEF and the U.N. Entity for Gender Equality and the Empowerment of Women (U.N. Women) were defeated, as was its candidacy for a four-year term on the NGO Committee.

The elections were held by the 54-member Economic and Social Council (ECOSOC), a U.N. body that coordinates socio-economic affairs, and fills vacancies on a number of subsidiary organs.

Despite Russia’s failure to win the seats, between 15 and 17 ECOSOC members did give Moscow their support in the three votes – at a time when its invasion of Ukraine and alleged atrocities against civilians are drawing strong condemnation.

For the UNICEF post, two seats earmarked for the Eastern Europe group went to Bulgaria (45 votes) and the Czech Republic (41 votes), while Russia obtained 17 votes.

For the U.N. Women post, the two Eastern Europe seats up for election went to Bulgaria (44 votes) and Latvia (44 votes), while Russia obtained 16 votes.

And in the vote for the NGO Committee, the regional group’s two available seats went to Armenia (47 votes) and Georgia (44 votes). Russia received 15 votes.

Earlier this week, senior representatives of UNICEF and U.N. Women briefed the U.N. Security Council on the significant negative impact Russia’s invasion, now in its seventh week, is having on Ukraine’s children and women – killings, massive displacement, and allegations of rape and sexual violence.

The prospect of Russia being elected to leadership posts at U.N. agencies dealing with the rights of children and women had alarmed human rights activists, who urged democracies to block Moscow’s bids.

While Russia’s defeats were welcomed, the election for the NGO Committee raised other concerns.

The 19 seats on the committee are distributed by regional group – five for Africa, four for Asia-Pacific, four for Latin America and the Caribbean, four for the Western group, and two for Eastern Europe.

Apart from Eastern Europe, where Armenia, Georgia, and Russia vied for the two seats, the other regional groups all offered closed slates – the same number of candidates as seats available – so the remaining 17 seats were filled “by acclamation,” with no actual vote held.

After inviting objections and hearing none, the presiding officer declared, “It is so decided.”

Of the 19 countries that will comprise the NGO Committee for four years beginning next January, only five are graded “free” by the democracy watchdog Freedom House – Chile, Costa Rica, Israel, the United Kingdom, and the United States.

Freedom House assesses countries each year, based on political rights and civil liberties.

Nine of the 19 are graded “not free” – Algeria, Bahrain, Cameroon, China, Cuba, Eritrea, Nicaragua, Turkey, and Zimbabwe. The remaining five are assessed as “partly free.”

The makeup of the NGO Committee matters, as it is empowered to decide which NGOs, many of them focusing on human rights and freedoms, may take part in U.N. proceedings and which may not.

Governments that have combative relationships with human rights advocates frequently use their membership to block or delay repeatedly applications by groups of which they disapprove.

“The United States regrets that the NGO Committee’s membership continues to include countries that are hostile to civil society, both domestically and at the U.N.,” the U.S. delegate said after the new membership was confirmed.

China’s delegate regretted that “a certain country” criticized the “election” of the NGO Committee.

U.N. Watch executive director Hillel Neuer, whose NGO frequently clashes with diplomats from repressive U.N. member-states, commented afterwards that the U.N. had just elected onto the committee “10 regimes that repress human rights activists.” (He cited the nine “not free” countries listed above, plus Pakistan.)

“This means dictatorships will have a majority on the committee in order to deny United Nations accreditation to any independent organizations in the world that call out their human rights violations, and to accredit fake front groups created by the regimes,” Neuer said.

Taypayers in the United States account for 22 percent of the regular U.N. budget.