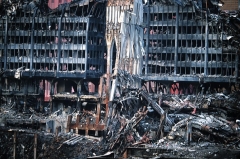 The mastermind of al-Qaeda’s 9/11 attack on the World Trade Center and the Pentagon, Khalid Sheikh Mohammed, was among terrorists whose capture was attributed in part to the Rewards for Justice program. (Photo by Andrew Lichtenstein/Corbis via Getty Images)

(CNSNews.com) – Russia and China are backing accusations by United Nations human rights experts that a U.S. State Department program offering rewards for information leading to the capture of terrorist suspects is violating the rights of those being targeted.

The Russian and Chinese foreign ministries have both endorsed the finding of the U.N. experts, with the Chinese ministry also taking the opportunity to try to deflect criticism from the U.S. and others about forced labor abuses against Uyghurs in Xinjiang region.

Since its establishment during the Reagan administration the Rewards for Justice (RFJ) program has targeted the world’s deadliest terrorists, paying out more than $150 million to individuals who have provided information helping to bring some of them to justice.

But the U.N. experts say many of those individuals have had their due process rights – including presumption of innocence and the right to a fair trial – denied.

“By offering money for information that can lead to the capture of these individuals, the program encourages others to participate in the denial of these rights,” Alena Douhan, the U.N.’s “special rapporteur on the negative impact of unilateral coercive measures on the enjoyment of human rights,” said in a recent statement.

Douhan, a law professor from Belarus, said the offering of rewards is “reminiscent of wanted posters that target fugitives from justice – fugitives charged with crimes or who have warrants for their arrest.”

She said the offer of money to foreign individuals is accompanied by threats to impose sanctions on them if they don’t cooperate with the U.S. demands.

“Making an individual carry out tasks against their will under the threat of a penalty for not doing so amounts to forced labor, as defined by agreements made through the International Labour Organization,” Douhan argued.

She urged the U.S. government to review the program, “to ensure that its activities are aligned with international law.”

Douhan’s statement was supported by the five members of the U.N. Working Group on Arbitrary Detention which, like her, is appointed by and answerable to the U.N. Human Rights Council.

Russian foreign ministry spokeswoman Maria Zakharova said Thursday Moscow agrees with the experts’ opinion regarding the RFJ program’s “non-compliance with the international standards in protection and promotion of human rights.”

Offering money for information on people who have not been officially charged with a criminal offense contradicts the “basics of jurisprudence, law, presumption of innocence,” she said.

Zakharova accused the U.S. of illegally interfering in the personal and family life of “legally innocent people” and violating their honor and dignity.

Chinese foreign ministry spokesman Wang Wenbin concurred, and latched onto one particular issue raised by Douhan – the assertion that making someone carry out a task against their will amounts to forced labor.

“The U.S. has repeatedly hyped up the false allegation of forced labor in Xinjiang, yet facts have proved that no one deserves the label of forced labor better than the U.S. itself,” Wang declared. “We urge the U.S. side to earnestly heed the concerns of the international community, examine its own serious human rights problems and take concrete steps to address them.”

Who’s who of international terrorists

The program in the crosshairs of the U.N. experts – and Russia and China – has seen a number of important successes. Among rewards paid out under the RFJ include $25 million for information leading to the arrest of al-Qaeda’s 9/11 attack mastermind, Khalid Sheikh Mohammed, and $30 million paid to an Iraqi who provided information that led U.S. forces to Saddam Hussein’s fugitive sons, Uday and Qusay Hussein, killed in a July 2003 gun battle in Mosul.

Other terrorists captured as a result of rewards offered under the RFJ program include 1993 World Trade Center bombing mastermind Ramzi Yousef, captured in 1995 and serving a life sentence in a U.S. federal prison.

The program, administered by the department’s law enforcement and security arm, the Diplomatic Security Service, paid $1 million and $5 for information that led to the location of two leaders of the brutal Abu Sayyaf Group in the Philippines. Hamsiraji Sali and Khadaffy Janjalani were killed in shootouts with Philippines forces in 2004 and 2006 respectively.

A list of fugitives with rewards on their heads at various times is a who’s who of international terrorists.

They include al-Qaeda leader Osama bin Laden and his successor Ayman al-Zawahiri (up to $25 million, the largest reward currently on offer), and ISIS leader Abu Bakr al-Baghdadi and his successor, Amir Mohammed Abdul Rahman al-Mawla.

In 2019, the Trump administration offered rewards under the program of up to $15 million “for information leading to the disruption of the financial mechanisms” of Iran’s Islamic Revolutionary Guard Corps and its Qods Force. The move came months after the administration designated the IRGC as a foreign terrorist organization – the first time ever that a foreign government entity had been added to the FTO blacklist.

Last summer the RFJ program was used for the first time to target cyber criminals suspected of election interference. Then-National Security Advisor Robert O’Brien said China and Russia (along with Iran) were engaging “in cyber-attacks and phishing and that sort of thing with respect to our election infrastructure.”