President Reagan and Soviet leader Mikhail Gorbachev listen to their interpreters during the Geneva summit in November 1985. (Getty Images)

(CNSNews.com) – The Russian government on Monday claimed credit for initiating a joint statement by the five recognized nuclear-armed powers, pledging to prevent a nuclear war. Moscow expressed the hope it would help to ease tensions “amid the current challenging international security environment.”

“This document was formulated on our initiative and with the most active participation of Russian representatives,” said foreign ministry spokeswoman Maria Zakharova, referring to the statement issued by the U.S., Britain, France, Russia and China.

“We expect that amid the current challenging international security environment, the endorsement of such a political statement by the leaders of nuclear powers will help to reduce international tensions,” Zakharova said.

She did not elaborate, but at the center of the “current challenging international security environment” lie Western concerns about Russia’s military intentions towards Ukraine, as the Kremlin pushes for security guarantees from the West concerning NATO expansion and deployments.

China’s threatening behavior towards Taiwan and towards rival claimants in the South China Sea adds to the challenges, at a time when U.S.-China relations are strained on numerous fronts.

The core of the joint statement is an affirmation by the five powers, which are also the five permanent members of the U.N. Security Council (the “P5” or “N5”), “that a nuclear war cannot be won and must never be fought.”

“As nuclear use would have far-reaching consequences, we also affirm that nuclear weapons – for as long as they continue to exist – should serve defensive purposes, deter aggression, and prevent war,” the statement says.

The five governments go to reaffirm “that none of our nuclear weapons are targeted at each other or at any other State.”

And they confirm they remain committed to their obligations under the nuclear Non-Proliferation Treaty (NPT), including their obligation “to pursue negotiations in good faith on effective measures relating to cessation of the nuclear arms race at an early date and to nuclear disarmament.” 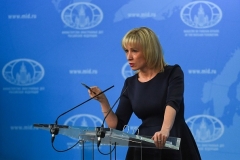 The contention that “a nuclear war cannot be won and must never be fought” appeared in a joint declaration by President Reagan and Mikhail Gorbachev at their historic 1985 Geneva summit.

The formula was reaffirmed 36 years later by President Biden and Russian President Vladimir Putin when they met in the same Swiss city last June. And weeks later, Putin and Chinese President Xi Jinping said in a joint statement that they “are firmly convinced that nuclear war has no winners and should never be unleashed.”

This is the first time for Britain and France to sign up publicly to the Reagan-Gorbachev principle, and therefore for all five declared nuclear-powers to do so.

According to Zakharova, the statement was to have been released at a NPT Review Conference, scheduled to open in New York on Tuesday, but it was postponed just days ago because of the COVID-19 pandemic.

“[G]iven the importance and self-sufficiency of this joint statement, the nuclear powers decided not to delay its publication,” she said.  (The four-week review conference may now only be held next August.)

Arms control specialists welcomed the joint statement, with reservations in some cases.

“Good news to start off 2022 – the P5 countries have affirmed together that a nuclear war cannot be won and must never be fought,” said Rose Gottemoeller, a U.S. arms control official during the Obama administration. “It is an important statement, and I am glad to see all five have signed on at last.”

“It’s good the N5 are ‘reaffirming that none of our nuclear weapons are targeted at each other or at any other State,’ but each of the N5 can quickly re-target their weapons,” tweeted Arms Control Association executive director Daryl Kimball.

“It’s in the self-interest of the N5 to ‘intend to continue seeking bilateral and multilateral diplomatic approaches to avoid military confrontations’ etc. but as the crisis over Ukraine and the tensions in the South China Sea illustrate, they must actually walk the talk,” he said.

Oliver Meier, senior researcher at the Institute for Peace Research and Security Policy in Germany, said the joint statement “has to be put into perspective by looking at lack of P5 actions on nuclear disarmament.”

“Nevertheless, from a non-nuclear weapon state perspective, it matters that France and U.K. have now given up their reservations and agree now with the rest of P5 that a nuclear war cannot be won and must never fought.”

Heather Williams, an arms control specialist and research fellow at the Harvard Kennedy School, tweeted that the joint statement “won’t satisfy many demands on P5 for NPT commitments. But given current tensions, it is noteworthy they could agree to anything.”

Under the NPT, the P5 – the only five countries with nuclear weapons at the time the treaty opened for signature in 1968 – are permitted to possess them, but not to transfer nuclear materials to other countries.

They also undertook, along with all other parties, to pursue negotiations designed eventually to result in complete nuclear disarmament.

It was extended early last year for a further five years, and is now due to expire in 2026. At their Geneva summit last June, Biden and Putin agreed to launch a dialogue to lay the groundwork for future arms control measures.

China’s growing nuclear arsenal is not covered by New START, and Beijing has shown no interest in joining a treaty that would place limitations on its program – despite efforts by the Trump administration to get it to join talks on the subject in 2020.

Every U.N. member-state is a party to the NPT except for India (which carried out its first nuclear weapons test in 1974), Pakistan (which tested nuclear weapons in 1998), Israel (which officially neither confirms nor denies possessing nuclear weapons but is believed to have done so since the 1960s), North Korea (which became the first country to withdraw from the treaty in 2003, and carried out six nuclear tests between 2006 and 2017), and South Sudan, the U.N.s newest member-state.