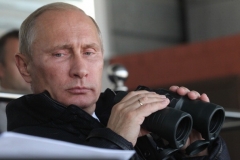 Russian President Vladimir Putin watches presentations at an armaments exhibition in the Urals in September. (Photo by Sasha Mordovets/Getty Images)

(CNSNews.com) – Russia is drawing up draft legal guarantees that NATO will not expand further to the east or deploy weapons in Ukraine or any other country neighboring Russia, the Kremlin said on Monday.

It said President Vladimir Putin had informed British Prime Minister Boris Johnson of this during a telephone conversation.

Calling NATO’s “exploration” of Ukrainian territory a direct threat to Russian security, Putin during the phone call “stated the need to immediately begin talks in order to develop clear international legal agreements that can preclude NATO’s further eastward advance and the deployment of weapons that pose a threat to Russia in neighboring states, primarily Ukraine.”

“Russia will present draft documents to this end,” the Kremlin added.

Russian Deputy Foreign Minister Sergey Ryabkov told the Izvestia daily newspaper on Monday that the U.S. and NATO ignoring Moscow’s demand for guarantees could lead to a new round of confrontation.

“Lack of progress towards a political and diplomatic solution to this problem will lead to our response being military and technological,” he warned.

Former Russian Ambassador to Washington Sergei Kislyak said that although he was not involved in drafting the documents, he expected they would include a reference to the principle that countries cannot strengthen their security at the expense of others.

Confirmation that Moscow is drawing up such documents comes five days after President Biden told reporters that, following his virtual meeting with Putin a day earlier, he planned along with four key NATO allies “to discuss the future of Russia’s concerns relative to NATO writ large” and explore “whether or not we can work out any accommodation.”

Putin’s concerns about NATO deal primarily with the transatlantic alliance’s eastward expansion and the prospect of Ukraine joining, as well as military deployments on NATO territory near Russia.

(NATO allies bordering Russia are Latvia, Estonia and Norway. Poland and Lithuania flank the small Russian exclave of Kaliningrad. NATO currently has battle groups in the Baltic countries and Poland.)

When he briefed reporters after the Biden-Putin talks, National Security Advisor Jake Sullivan said that Biden had made no “commitments or concessions” to Putin relating to Ukraine’s aspirations to join NATO.

Sullivan said Biden “stands by the proposition that countries should be able to freely choose who they associate with” – a point repeated since then a number of times by the White House and State Department.

Still, Putin’s comments to Johnson on Monday indicate that the Kremlin is doubling down on its plan to seek written commitments from the West on further NATO expansion and military deployments.

The Kremlin has said written legal guarantees are needed because the West failed to keep verbal commitments dating back to the disintegration of the Soviet Union on not expanding NATO into its sphere of influence. Since 1999, 14 formerly communist countries have joined the alliance.

The Ukrainian government, except for the period when a Moscow-backed president was in office (2010-2014), has been pushing for more than a decade and a half to be put on a path to NATO membership.

Russia bitterly opposes the move, and its opposition has torpedoed efforts to achieve consensus among existing members. Both Ukraine and Georgia have been told since 2008 that they “will become members” of NATO, but with no timeline given.

At the same time, NATO Secretary-General Jens Stoltenberg has reiterated that Russia has “no veto” on NATO membership decisions.

Ryabkov told Izvestia that Russian leaders had been “repeatedly” assured that there would be no further NATO expansion, yet the opposite had occurred.

“There should be no further expansion of NATO,” Ryabkov said. “Attempts to present things as if Russia does not have a right of a ‘veto’ here are all untenable. We will stand our ground. If our opponents go against us, they will see that their security is not strengthened. The consequences for them will be dire.”

Russia’s opposition to Ukraine joining NATO has been an important factor in Moscow’s 2014 occupation and annexation of Crimea and ongoing support for separatists in eastern Ukraine’s Donbass region.

In response to the most recent buildup of Russian forces near Ukraine’s borders, the U.S. and allies have laid out three strands of response should Russia invade: harsh economic sanctions; the provision of additional defensive materiel to Ukraine; and steps to fortify allies on NATO’s “eastern flank” with additional military capabilities.

Russia denies any intention to invade Ukraine, but accuses Kyiv of taking actions against the pro-Russian separatists in Donbass that are in violation of the Minsk agreements.

The 2014-2015 Minsk agreements were designed to provide a framework for peace in Donbass, where fighting between government forces and the self-proclaimed separatist republics have cost more than 13,000 lives since 2014.

During Monday’s call with Johnson, Putin accused the Ukrainian government of discrimination against Russian-speakers and of using heavy weapons and attack drones near the “line of contact” separating Ukrainian and separatist forces.

The State Department’s assistant secretary responsible for Europe and Eurasia, Karen Donfried, visited Kyiv on Monday and will be in Moscow on Tuesday as the administration continues its efforts to find a diplomatic solution to the standoff. She will then brief allies at NATO headquarters in Brussels.

Psaki said the administration was working on a daily basis to seek “a diplomatic path forward.”