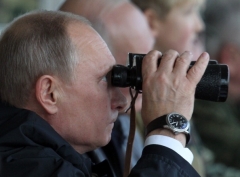 (CNSNews.com) – Three weeks after receiving U.S. and NATO written responses to its demands for security guarantees, Russia provided a reply on Thursday, accusing the West of cherry-picking the points that it is prepared to talk about, but refusing to give way on the chief issue for Russia – NATO expansion and activities.

In a 3,000-word document handed to U.S. Ambassador John Sullivan, the foreign ministry said Russia’s proposals for resolving the “unacceptable situation” in Europe entail “creating a stable foundation of a security architecture in the form of an agreement, under which NATO will give up further actions damaging Russia’s security.”

If the U.S. and its allies were not ready to agree on “firm, legally binding guarantees of our security,” it said, “Russia will be forced to respond, including though the implementation of military-technical measures.”

The document (in Russian) accused the U.S. of having conveniently chosen those points among the concerns raised by Moscow that it was comfortable discussing, but refusing to give ground on the issues of greatest importance.

“We expect concrete proposals from the alliance’s members about the form and substance of the legal confirmation that further eastward expansion by NATO will be abandoned,” it said.

“We insist on the withdrawal of all U.S. armed forces and weapons, deployed in Central and Eastern Europe, Southeastern Europe, and the Baltics.”

On January 26, the U.S. and NATO delivered papers responding to a set of written demands issued by Russia in December. Those responses made clear that the alliance’s “open door” admission policy will not change, on the basis that countries should have the right to choose their associations, without outside interference.

That policy makes application for membership in NATO available to any country that seeks it, on condition it meets certain criteria – and that all 30 current allies approve.

Russia is particular averse to Ukraine joining the 14 other countries formerly under communist rule that have joined the alliance since 1999.

Were Ukraine to join, it would increase the length of border that Russia currently shares with NATO members (Latvia, Estonia and Norway) from about 450 miles to more than 1,600 miles.

Russia argues that in the Organization for Security and Cooperation in Europe (OSCE) region – which includes nations in Europe and Eurasia that were on both sides during the Cold War – a country’s right to choose a security alliance must be balanced against not impacting on the security of others – what it calls the “indivisibility” of security.

Apart from the difficulty of reaching consensus among 30 NATO allies for Ukraine to begin the membership process, the country’s aspirations are also dogged by the existence of unresolved territorial and ethnic disputes.

Russia annexed the Crimean peninsula in 2014 and began supporting separatists in the Donbass region of eastern Ukraine – the area that could well be the flashpoint for war in the coming days.

A significant buildup of Russian troops near Ukraine’s borders, coupled with wargames in Belarus that are scheduled to end on Sunday and live-fire exercises in the Black Sea, have stoked fears that an armed attack is only a matter of time.

Despite Russian claims this week to have begun withdrawing units from near the border, the West is skeptical, and President Biden said on Thursday that the threat of invasion was “very high.”

"My sense is it will happen within the next several days,” he told reporters at the White House.

Biden also said he had yet to see Russia’s written response, which he said was on its way from Moscow.

Lavrov: The West’s approach ‘will not work’

In the document handed over on Thursday, the foreign ministry in Moscow slammed the talk of invasion, and said Western charges of Russia’s responsibility for escalation were designed to “exert pressure and devalue Russia’s proposals for security guarantees.”

In its December paper, which took the form of a draft legally-binding U.S.-Russia treaty on security guarantees, Moscow addressed the issue of bombers and warships near each other’s borders:

“The Parties shall refrain from flying heavy bombers equipped for nuclear or non-nuclear armaments or deploying surface warships of any type, including in the framework of international organizations, military alliances or coalitions, in the areas outside national airspace and national territorial waters respectively, from where they can attack targets in the territory of the other Party.”

In its document Thursday, the foreign ministry said Russia takes note of the U.S. willingness to look at the issue of “additional risk reduction measures regarding flights by heavy bombers near the national borders of both sides.”

“We see a subject for discussion and the potential for mutually acceptable agreements,” it said, but added that it wanted similar consideration of its concerns regarding warships, “which also involve serious risks.”

The Russian document concluded by saying the U.S. and its allies must abandon their “policy of containment of Russia, and take concrete practical measures to de-escalate the military and political situation.”

Secretary of State Antony Blinken has been saying in recent days that once the Russian response is received, the U.S. will be willing to continue discussions.

Addressing the U.N. Security Council on Thursday, Blinken said he has invited Russian Foreign Minister Sergei Lavrov to meet again in Europe next week “to discuss the steps that we can take to resolve this crisis without conflict.”

Speaking in Moscow several hours earlier, Lavrov spoke about Russia’s view that the U.S. was picking and choosing which of Russia’s security concerns to address. He characterized them as a “package” that must be dealt with as such.

“For us, the main thing is not to pull out some separate things from the ‘package’ and then say that we have solved all the problems,” he said at a press appearance with his Italian counterpart.

“We will not decide anything until we agree on key positions on which security in Europe depends: non-expansion of NATO to the east, non-deployment of strike weapons, respect for the military-political configuration in Europe that existed at the time of the signing of the [1997] Russia-NATO Founding Act.”

The West’s attempt to “wrest” from the Russian proposals only those parts that suit it, Lavrov declared, “will not work.”