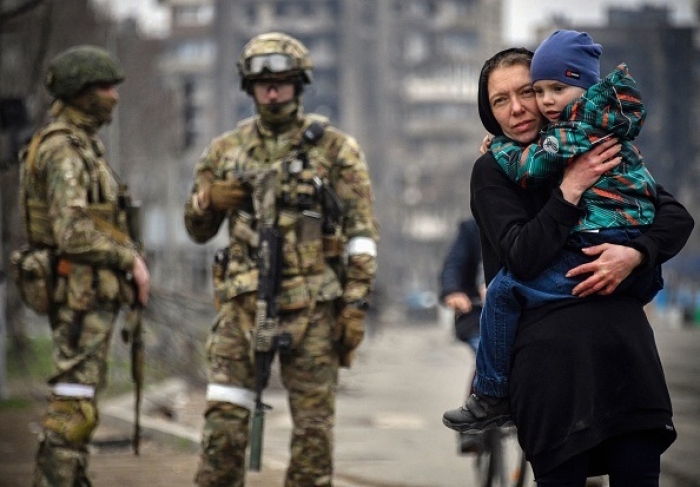 A Ukrainian woman holds a child as Russian soldiers look on in a street in Mariupol on Tuesday. (Photo by Alexander Nemenov/AFP via Getty Images)

(CNSNews.com) – At a time when its military invasion of Ukraine is exacting enormous costs for women and children in that country, Russia is running for election on Wednesday for seats on the governing bodies of U.N. agencies focusing on the rights of women and children.

The secret ballot election in New York will be held by the Economic and Social Council (ECOSOC), a body of 54 member-states that coordinates U.N. socio-economic affairs, and fills vacancies on a number of subsidiary organs.

In each case, Russia is in the running for two seats earmarked for the Eastern Europe group. Russia is already a member of both boards, but with its terms set to expire at the end of 2022 it is seeking new three-year terms.

Russia also is for a seat Wednesday on ECOSOC’s 19-member NGO Committee, which oversees the accreditation at U.N. forums of non-governmental organizations – and has a track record of being used by repressive regimes to block certain human rights NGOs’ applications. (Current members include Bahrain, Burundi, China, Cuba, Libya, Nicaragua, Pakistan, Russia, Sudan, and Turkey.)

Other Eastern Europe candidates in the contests involving Russia reportedly include Armenia, Georgia, Bulgaria, Latvia, and the Czech Republic

On Monday, the U.N. Security Council was briefed by senior officials in U.N. Women and UNICEF about the impact the invasion launched by President Vladimir Putin six weeks ago is having on Ukrainian women and children.

UNICEF’s emergency programs director, Manuel Fontaine, reported that nearly two-thirds of Ukraine’s children – 4.8 million of a total 7.5 million – have been displaced from their homes as a result of the conflict. 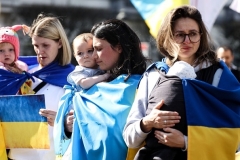 Women wrapped in Ukranian national flags demonstrate in support of child victims of the war, near the European Parliament in Brussels last month. (Photo by Kenzo Tribouillard/AFP via Getty Images)

Fontaine said two million of the displaced children are now outside the country, and 2.8 million still within Ukraine. Even for those children still in their own homes, he said, many may be at risk of not having enough food, or access to safe drinking water.

The U.N. human rights office in Geneva as of Tuesday has verified the deaths of Ukrainian 153 children, with 246 having sustained injuries, but says the real numbers are assuredly much higher. Ukraine’s Prosecutor General’s Office put the numbers at 186 children killed and at least 344 injured.

Also briefing the Security Council was U.N. Women executive director Sima Bahous, who has just returned from visiting Ukrainian refugees in neighboring Moldova, and said allegations of rape and sexual violence against women fleeing the fighting are emerging.

The U.N. has verified the deaths of hundreds of women in Ukraine. Of 1,739 adult fatalities reported as of Tuesday, 308 were women, 478 were men, while the sex of the remaining 953 victims was as yet unknown, it said.

Russian delegate Dmitry Polyansky denied allegations of abuses and reiterated Moscow’s narrative that atrocities like the deliberate killing of civilians in Bucha and a missile attack that killed dozens at a railway station were carried out by Ukrainian “Nazis” and “nationalists,” staged to falsely implicate Russia.

Commenting on Russia’s running for seats on the U.N. Women and UNICEF boards and the NGO Committee, U.N. Watch executive director Hillel Neuer noted that the same ECOSOC voting by secret ballot last year elected Iran onto the U.N.s top gender equality body, the Commission on the Status of Women (CSW).

Neuer voiced the hope that democracies among ECOSOC’s members will all vote to reject Russia’s candidacies.

How ECOSOC member will vote on Wednesday under the cover of a secret ballot is not known, but their stance in last week’s General Assembly vote on a resolution suspending Russia from the U.N. Human Rights Council may provide an indication.

Of the 54 members of ECOSOC that will be casting ballots on Wednesday, 30 voted in favor of the General Assembly resolution, which passed 93-24, with 58 abstentions.