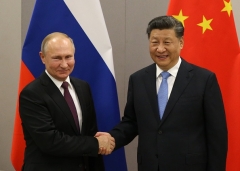 (CNSNews.com) – Under growing international pressure, the Russian and Chinese foreign ministries’ spokespeople have agreed to step up their cooperation in combatting a campaign of “disinformation” which they say is being conducted against them by “certain countries.”

The two ministries, whose regular briefings are often marked by personal attacks on critical Western government officials, sarcastic jibes, and depictions of their own countries as blameless victims of U.S. hostility and interference, want to work more closely together.

Fighting back together will be “twice as effective” as doing so alone,  said Russian foreign ministry spokeswoman Maria Zakharova after a meeting by video link with her Chinese counterpart, Hua Chunying.

The Russian foreign ministry said topics discussed included “increasing information pressure of the West in the context of attempts to interfere in the internal affairs of Russia and China, including the purposeful spread of fake news.”

In a joint statement, the ministries said “certain countries” were placing obstacles in the way of mutual understanding in the international arena.

“Guided by ideological and political considerations, [these countries] were involved in falsification, distortion of historic realities, and also lashed out at other states’ social systems and paths of development,” they said.

“China and Russia are major powers that pursue responsible policies and develop bilateral relations of a comprehensive partnership,” the statement said. “Both countries aim to cooperate with other nations to battle disinformation.”

At a briefing in Beijing on Monday, Hua’s colleague Wang Wenbin elaborated on the discussions, and on the challenges as seen by the Russian and Chinese ministries.

“Countries should strengthen solidarity and coordination, jointly reject disinformation so that political viruses such as rumors and slanders, and the perpetrators and manipulators behind the scene will have no place to hide.”

Wang said other countries “should not adopt double standards, interfere in others’ internal affairs or level groundless attacks against other countries’ political system, development path or state governance based on ideology and political prejudice.”

The decision to increase cooperation comes amid an unprecedented campaign by the Trump administration to call out the Chinese Communist Party over its policies and actions. In a series of high-profile speeches, top officials have highlighted repression, trade abuses, espionage and intellectual property theft, the bullying of neighbors over territorial and maritime disputes, and the CCP’s early mishandling of the coronavirus outbreak.

The public criticism has been accompanied by the imposition of sanctions against Chinese officials over actions including the undermining of Hong Kong’s autonomy and human rights abuses in Xinjiang province.

It’s not just the U.S.: Efforts by the Trump administration to encourage allies to take tougher stances over what it views as malign behavior by Beijing and Moscow have made progress too.

Britain also alleges that Russia meddled in its 2019 general election, and joined the U.S. and Canada in accusing cyber criminals linked to Russian intelligence of trying to steal coronavirus vaccine development data. Moscow denies the claims.

China’s curtailing of Hong Kong’s autonomy meanwhile has drawn strong responses from a number of countries, with Britain, Australia, and New Zealand all suspending extradition treaties with Hong Kong over the move. Britain is also making it easier for millions of Hong Kong residents to live, work and study in Britain, and eventually apply for citizenship.

Secretary of State Mike Pompeo has become a particular target for both ministries, with Hua and her colleagues in Beijing regularly excoriating him by name.

“For quite some time Pompeo has been busy concocting fake news to vilify China and drive a wedge between China and other countries,” spokesman Zhao Lijian said in a typical comment earlier this month. “All this has laid bare his deep-seated Cold War mindset, zero-sum game mentality and ideological prejudices.”

At Monday’s briefing Hua called Pompeo’s China policy speech at the Nixon Presidential Library last Thursday “outrageously deranged” and called on “all peace-loving countries and people to step forward and say no to the insanity of Pompeo and his like that jeopardizes world peace.”

In her reaction to the same speech, Zakharova said that Russia was “surprised by the defiant tone of Mr. Pompeo’s statements, which predictably contained crude references to China, its social and political system and its leaders. Unfortunately, these things are common in U.S. foreign policy diplomacy these days.”

Zakharova suggested that if Pompeo thought he could draw Russia into his “anti-China campaign” in a bid to drive a wedge between Moscow and Beijing, he was mistaken.

“We intend to further strengthen our cooperation with China because we regard this cooperation as the most important factor in stabilizing the situation around the world,” she said.