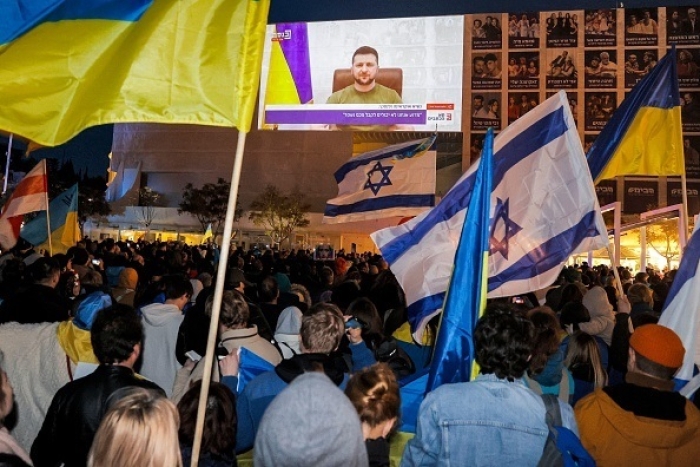 Lavrov suggested in a weekend Italian television interview that the fact Ukrainian President Volodymyr Zelenskyy is Jewish is irrelevant to Moscow’s characterization of the forces its troops are fighting against in Ukraine as “neo-Nazis.”

“His argument is: How can there be Nazism in Ukraine if he is a Jew?” Lavrov told his interviewer. “I may be mistaken but Adolf Hitler had Jewish blood, too. This means absolutely nothing.  The wise Jewish people say that the most ardent anti-Semites are usually Jews.”

The remarks stoked widespread anger, especially in Israel, where the government called for an apology and Lapid called them “unforgivable and outrageous” and “a terrible historical error.”

“Jews did not murder themselves in the Holocaust,” Lapid said, in reference to Nazi Germany’s systematic murder of six million Jews during World War II. “The lowest level of racism against Jews is to accuse Jews themselves of antisemitism.”

Russia’s foreign ministry evidently decided against using quiet diplomacy to assuage the angry reaction. In a statement on its Telegram channel, it said Lapid had made “anti-historical” remarks which “largely explain why the current Israeli government supports the neo-Nazi regime in Kyiv.”

The ministry said that there were “examples of cooperation between Jews and the Nazis” during the Holocaust, but that unlike Jews who were “forced to participate in crimes” during World War II, Zelenskyy does so “consciously and voluntarily.”

It accused Zelenskyy of “hiding behind his origins” while aligning himself with neo-Nazis, “the spiritual and blood heirs of the executioners of his people.”

Russia’s foreign ministry said antisemitism and Nazism were not suppressed in Ukraine, but were on the contrary nurtured.

“These comments are not just inaccurate and offensive, but harm the memory of victims of the Holocaust,” said European Jewish Congress president Ariel Muzicant. “Blaming Jews for antisemitism is never acceptable.”

Muzicant also made the point that millions of Soviet soldiers had died fighting Nazism.

“And I think with it and other – not only statements but conduct from the Kremlin, its top officials, its personnel, including its personnel in Ukraine, the Kremlin is consistently proving that there is no floor when it comes to just how low they can stoop.”

Speaking on Israeli radio on Tuesday, Lapid underlined his earlier criticism of Lavrov’s remarks, saying that it was “unforgivable to blame Jews for their own Holocaust.”

“Hitler was not Jewish and Jews did not murder my grandfather in Mauthausen,” he said, in reference to the Nazi concentration camp in Austria. “The Nazis did it, and all of these comparisons to the Nazis are unforgivable and infuriating.”

Lavrov has been foreign minister since 2004 – for almost the entire presidency of President Vladimir Putin, and for a period overlapping the tenures of seven U.S. secretaries of state. Before taking the post he served as Russian ambassador to the United Nations for a decade.