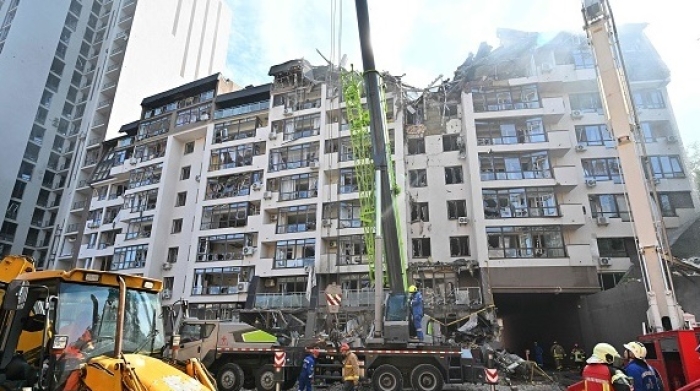 Ukrainian rescue workers at a residential building in Kyiv hit by Russian missiles on Sunday morning. (Photo by Sergei Supinsky/AFP via Getty Images)

(CNSNews.com) – Russian missiles hit a multistory residential building and a kindergarten in Kyiv early on Sunday, killing at least one person and injuring six others in what the city’s mayor called an attempt to “intimidate Ukrainians” on the eve of summits in Europe focused strongly on the war.

The attack, the first to target the capital in three weeks, came as G7 leaders assembled 900 miles away in southern Germany for a summit dominated by the regional and global ramifications of President Vladimir Putin’s invasion of Ukraine.

The casualties occurred in the nine-story apartment block in central Kyiv, badly damaged by what the Ukrainian air force said were Russian Kh-101 cruise missiles launched from long-range strategic bombers over the Caspian Sea, roughly 1,000 miles away.

The kindergarten, which was empty at the time of the early morning attack, sustained damage but no-one was hurt. The air force said between four and six cruise missiles hit the two locations.

Kyiv Mayor Vitali Klitschko said more than 20 residents of the apartment block were rescued from the rubble. A seven-year-old girl and her mother were among the wounded taken to hospital, and the mayor said the man killed was from the same family.

The last time Russian forces attacked Kyiv was on June 5, when four missiles hit a residential building. Since Russian troops were pulled out of areas they were holding near the capital in early April, most of the fighting has been in the east and southeast of the country.

Another city, Cherkasy in central Ukraine, was also struck by Russian missiles on Sunday. The head of the local administration said one person was killed and five were injured in two strikes. 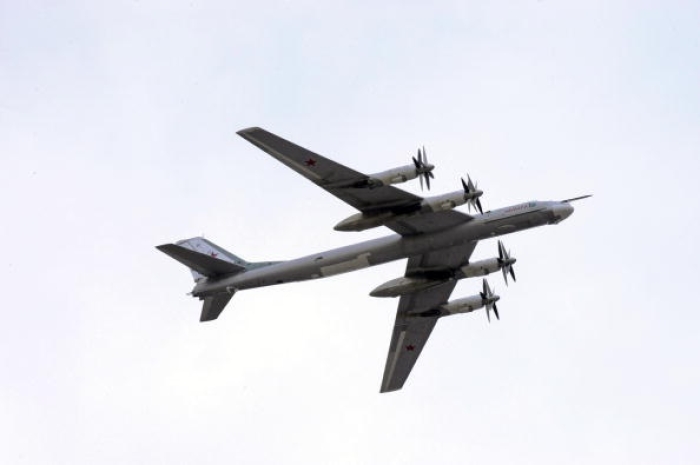 Ukrainian President Volodymyr Zelenskyy has been invited to address this week’s back-to-back G7 and NATO summits, which aim to galvanize and underscore a unified Western-led response to Putin’s invasion.

The G7, the club of the world’s leading economies – which expelled Russia after Putin annexed Crimea in 2014 – has spearheaded the imposition of sanctions in response to the invasion, and plans at this summit to announce new steps, including banning the import of Russian gold.

Mykhailo Podoliak, an advisor to Zelenskyy, saw the Sunday missile attack as a clear message of defiance from the Kremlin.

He said on Twitter that the shelling was a contemptuous message from “Putin’s clan” to the G7: “I am sending missiles to the center of Kyiv, right next to your embassies. And what will you do?”

Podoliak also likened the Russian military’s tactics to those of “terrorists,” such as the Taliban or Hezbollah.

“It’s more of their barbarism,” President Biden said in Germany, in response to a reporter’s question about the Kyiv attack.

During a meeting between Biden and German Chancellor Olaf Scholz, both men underlined the united front against Russia.

Biden said Putin had counted from the outset on G7 and NATO unity splintering – “but we haven’t, and we’re not going to.” 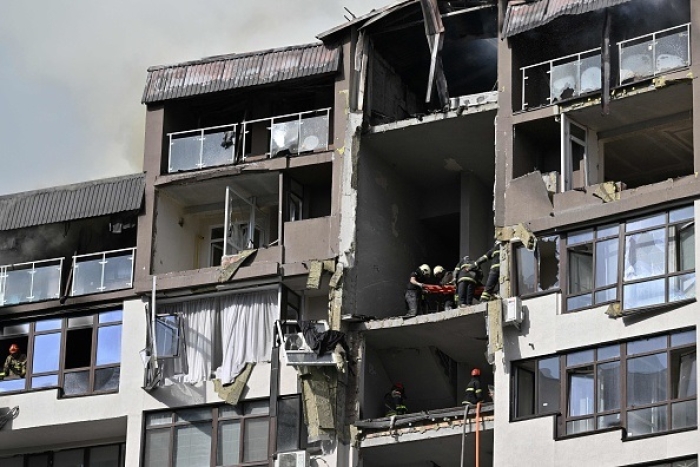 ‘There will be nowhere to hide’

Meanwhile, in what has become a pattern in this war, the Russian defense ministry claimed that the strikes in Kyiv were not caused by its munitions at all.

The ministry said the Russian missiles’ target was a Ukrainian defense plant, and that the damage to an apartment block nearby had been caused by a Ukrainian air defense missile that sought to engage the incoming Russian projectile.

The claims were echoed by pro-Kremlin media, with the Vzglyad daily quoting a “military expert” and other commentators as making similar insinuations. (“ … as you know, Russia strikes only at military targets.”)

In his nightly video address to the nation, Zelenskyy named the injured girl as Zhenya, and said the 37-year-old man killed in the attack was her father.

He said the girl’s injured mother happened to be a Russian citizen, who had lived safely in Ukraine “until Russia itself decided that everything was equally hostile to them now – women, children, kindergartens, apartment buildings, hospitals, railways.”

Zelenskyy called again for modern and effective air defense systems, and said it was something Ukraine speaks to its “partners” about on a daily basis.

“And partners need to move faster if they are really partners, not observers,” he said, adding that delays in transferring weapons amounted to “an invitation for Russia to strike again and again.”

Zelenskyy also had a message for the Russians involved in the missile strikes against civilian infrastructure.

“Each of you will be responsible for these strikes,” he said. “And if someone thinks that he will evade responsibility by saying that such was the order, you are mistaken. When your missiles hit residential buildings, these are war crimes.”

“Trial is what awaits you all,” Zelenskyy added. “And there will be nowhere to hide for you – neither on the shores of the Caspian Sea, over which your missiles are launched, nor in Belarus ... Nowhere.”