As Russian Weaponry Arrives, US Warns Belarus Not to Be ‘Part of a Plan’ to Invade Ukraine 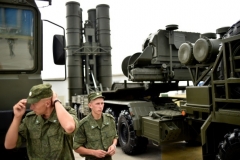 (CNSNews.com) – Russia has again flown long-range bombers through Belarus’ air space, and Russian troops and weapons systems continue to arrive in Ukraine’s northern neighbor ahead of military exercises due to begin within days.

U.S. officials have voiced concern that the scheduled drills could form part of a broader Russian plan to launch an attack against Ukraine. Russia has also deployed some 100,000 troops near Ukraine’s eastern borders, although it consistently denies Western claims that it is preparing an invasion.

“Two Tu-22M3 long-range bombers of the Aerospace Forces completed a patrol mission in the Belarusian airspace,” Russia’s defense ministry confirmed at the weekend, saying that they returned to base in Russia after carrying out “joint tasks with the air force and air defense of the Belarusian armed forces.”

The ministry also reported that a battalion of Russia’s sophisticated S-400 anti-aircraft missile defense systems had arrived at a training ground in Brest, situated near Belarus’ borders with both Ukraine and Poland. It said the units had traveled some 5,500 miles, from their permanent station in Khabarovsk in Russia’s far east.

According to both countries’ defense ministries, the main thrust of the Union Resolve 2022 war games will run from February 10-20, and will involve simulations of repelling external aggression and countering cross-border terrorism.

At its closest point, Ukraine’s border with Belarus lies about 60 miles from Kyiv.

“She reiterated concern about Russia’s announced plan to bring 30,000 troops into Belarus for military exercises, particularly with more than 100,000 troops already stationed on Russia’s border with Ukraine,” the State Department said after the talks.

“Assistant Secretary Donfried also emphasized that Belarus would face commensurate consequences as Russia if it were part of a plan to further invade Ukraine.”

In his account of the discussion, a spokesman for the Belarus foreign ministry, Anatoly Glaz, said Makei had informed Donfried that “the scheduled army exercises, which face so much hysterics in the West, has been arranged precisely due to the obvious fomenting of tensions near our borders.”

Glaz said the minister had stressed that “speculations about some kind of initiative military aggression from Belarus’ territory against Ukraine are simply laughable.”

Other Belarusian officials in recent days have also stepped up their criticism of Ukraine and Western countries for expressing concern about the exercises and possible Russian intentions.

On Sunday the secretary of the Belarusian Security Council, Alexander Volfovich, accused Kyiv of trying to stoke tensions by criticizing the Russia-Belarus exercises.

“They are openly whipping up tensions, keep on speaking about Russia’s aggression, from Belarus’ territory this time,” he told the Belarus state television network ONT. “They are alleging that Russia plans to attack Ukraine, which I think is inexpedient and improbable today.”

Meeting with Russian Defense Minister Sergei Shoigu in Minsk last week, Belarusian President Alexander Lukashenko said, “Everyone has noticed that we are relocating a lot of hardware from Russia to Belarus, including modern hardware.”

“Whatever people may be shouting about here, it is clear that after your arrival in Belarus there will be even more wailing, but that is their problem,” he said.

Lukashenko said it was important for his troops to handle Russian military hardware and to learn from the Russians, given “the behavior of NATO and Ukraine, which is eager to join NATO.”

Russia has not given details of the number of its troops that will be involved in the Belarus drills. U.S. Ambassador to the U.N. Linda Thomas-Greenfield told the U.N. Security Council a week ago that 5,000 Russian personnel had already entered Belarus, and that the U.S. has seen evidence that Russia intends to up the number to “more than 30,000 troops near the Belarus-Ukraine border, less than two hours north of Kyiv, by early February.”

State Department spokesman Ned Price said late last month that the U.S. had “made clear to Belarus that if it allows its territory to be used for an attack on Ukraine, it would face a swift and decisive response from the United States and our allies and partners.”

“If an invasion were to proceed from Belarus, if Russian troops were to permanently station on their territory, NATO could well have to reassess our own force posture in the countries that border Belarus,” he added, referring to Lithuania, Latvia, and Poland, all NATO members.