Russians Renew Missile Attacks on Kyiv, Reportedly From 1,000 Miles Away 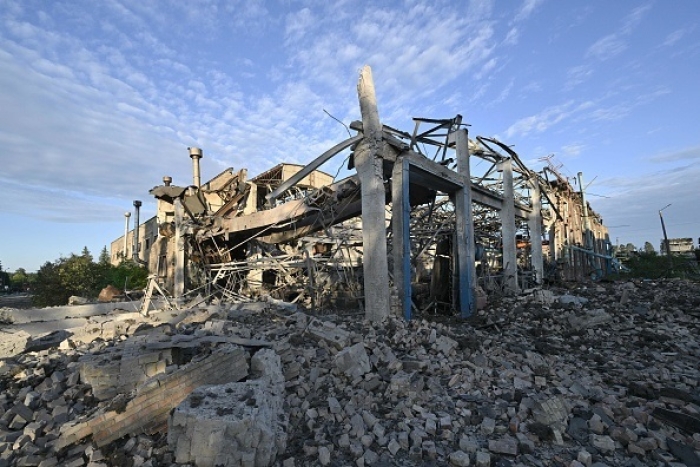 (CNSNews.com) – Russian forces on Sunday fired missiles at Kyiv for the first time since late April.

President Vladimir Putin said that if the West delivers long-range missiles to Ukraine, Russia would retaliate by striking facilities that it has refraining from attacking up to now.

In an interview on state television, Putin shrugged off the recent U.S. decision to provide the Ukrainians with advanced multiple launch rocket systems, along with limited-range projectiles, to help them defend their territory from the invading Russian forces.

Those same systems are also capable of firing long-range missiles, however, and Putin said that if the West decides to supply Kyiv with such missiles, “we will draw conclusions from that and employ our weapons that we have in sufficient quantities to strike those facilities that we are not attacking so far.”

The Biden administration says Ukraine has committed not to use the rocket launch systems to fire across the border into Russian territory.

Meanwhile the Russians, while fighting on the ground in the eastern Donbass region – where Kremlin-backed separatists have fought the central government since 2014 – are also using long-range weapons to attack Ukraine, sometimes from many hundreds of miles away.

The ministry said the missiles were believed to have been launched by Tu-95 strategic bombers over the Caspian Sea, which lies around 1,000 miles to the south-east of Kyiv.

But Russia’s Defense Ministry said the missiles had destroyed T-72 tanks and armored vehicles which had been supplied to Ukraine by European countries.

Serhiy Leshchenko, an advisor to the Ukrainian presidency who also holds a senior supervisory position at the railway company, said journalists taken to the scene of the strike saw no evidence of tanks as claimed by Moscow. The Associated Press said its reporters saw no remnants of military equipment in any of the destroyed buildings.

“People [in Kyiv] woke up to air raid sirens, whistling rockets, smoke and explosions,” Ukraine’s foreign ministry tweeted. “The war is going on, no one can feel safe, and no one knows who or what the Russian army can target next.”

Ukraine’s national nuclear energy body Energoatom warned that cruise missiles, presumably headed for Kyiv, had flown “critically low” over a nuclear power plant in the south of the country.

Energoatom said in a Facebook post that the Russians “still do not understand that even the smallest fragment of a missile that can hit a working power unit can cause a nuclear catastrophe and radiation leak.”

Ukrainian officials said Russia also fired air-launched cruise missiles from over the Black Sea at facilities, including grain storage sites, in the Mykolaiv coastal region south of the capital.

Russia and the West offer competing narratives on attributing blame for the problem.

The U.S. and its allies say a situation already severely impacted by the COVID-19 pandemic and climate factors has worsened considerably as a result of Russia’s invasion of Ukraine and what they say is a deliberate policy to block shipments of Ukrainian grain.

Moscow contends that Ukrainian-placed mines in the sea are responsible for the shipping difficulties, and at the same time Western sanctions are preventing Russian grain from going to world markets. It has called on the West to lift the sanctions – which have been imposed because of the invasion of Ukraine.

Putin repeated those points during an interview with Rossiya 1 state television on Friday, saying Ukraine could simply “demine the ports and let the vessels loaded with grain leave.”

Putin said Ukraine could also get its grain out to world markets overland, via Hungary, Romania, Poland, or Belarus – although in the latter case the West would have to lift sanctions first, he said.

“So, the problem of shipping grain out of Ukraine does not really exist.”

The regime of Belarusian President Alexander Lukashenko has been targeted by Western sanctions for its role in supporting and facilitating Russian aggression against Ukraine.