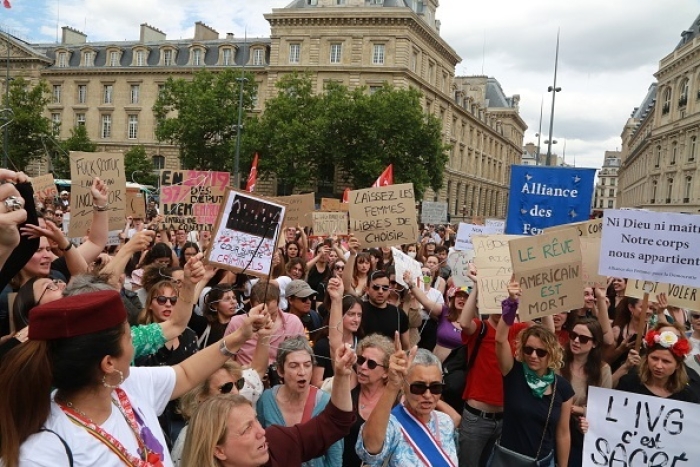 (CNSNews.com) – Declaring the U.S. Supreme Court’s ruling overturning Roe v. Wade “catastrophic for women around the world,” French lawmakers are pressing for legislation to enshrine the “right” to abortion in their country’s constitution.

The initiative was announced by the leader of President Emmanuel Macron’s Ensemble (“Together”) group in the National Assembly, Aurore Berge, who said in a radio interview, “we must take measures in France today so as not to have any reversal of existing laws tomorrow.”

Joining Berge in introducing the measure is fellow Ensemble lawmaker Marie-Pierre Rixian, who said that “what happened elsewhere must not happen in France.”

“We must safeguard the right to IVG for future generations,” Rixian said, using the acronym for the preferred euphemism in France for aborting an unborn child – a “voluntary interruption of pregnancy.”

The draft bill authored by Berge states that “no one may be deprived of the right to voluntarily interrupt a pregnancy.”

The proposal from Macron’s movement drew quick expressions of support from Macron’s newly-appointed prime minister, and from the leftist opposition alliance that holds the second-largest number of seats in the National Assembly following elections this month.

Macron was among world leaders to decry the momentous Supreme Court decision in Dobbs v. Jackson Women’s Health which overturned the court’s 1973 decision that declared abortion a constitutional “right” and returned authority to regulate abortion to the states.

“Abortion is a fundamental right for all women,” Macron tweeted in English after the decision was announced. “It must be protected. I wish to express my solidarity with the women whose liberties are being undermined by the Supreme Court of the United States.”

“For all women, for human rights, we must engrave this achievement in stone,” she tweeted. “Parliament must be able to come together very broadly around this text.”

With Ensemble and the now official opposition NUPES (New Ecological and Social Popular Union) coalition behind the bill, passage in the National Assembly would be likely.

However, amending France’s 1958 constitution requires the National Assembly and Senate to adopt the same text, which must then win the support of a three-fifths majority of a joint session (or alternatively, a majority in a national referendum.) 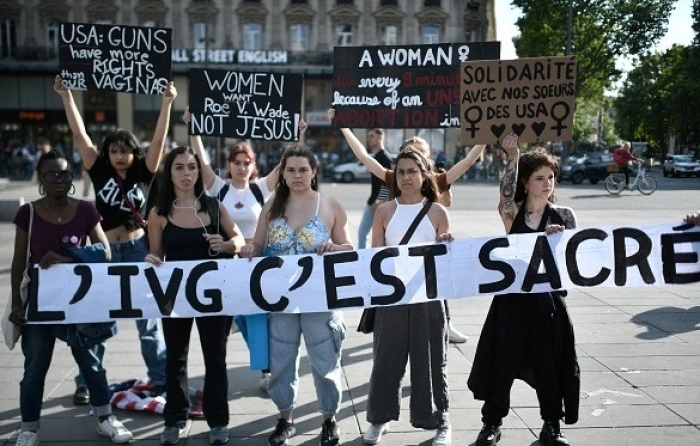 ‘Abortion is sacred’ reads a banner carried during a protest in Paris, France on Friday, reacting to the U.S. Supreme Court ruling. (Photo by Stephane De Sakutin/AFP via Getty Images)

The center-right Republicans and their allies lost almost half of their seats in the National Assembly, but still control the Senate.

The Republican leader in the Senate, Bruno Retailleau, made clear his party’s view of Berge’s initiative, accusing the governing majority of deflecting attention from serious problems facing the country, and asking tongue-in-cheek whether it would respond in kind to another recent Supreme Court ruling.

“To hide its inability to solve the real problems of the country, the majority invents fictitious ones,” he tweeted. “Should we enshrine the prohibition of weapons in the constitution on the pretext that the U.S. Supreme Court has enshrined the right to carry them in the street?”

Abortion until the end of the 12th week of pregnancy has been legal in France since the mid-1970s.  In 1988 it became the first country to introduce the abortion pill, RU-486 (mifepristone).

Past attempts by French legislators to amend the constitution to include the “right” to abortion have been unsuccessful. Earlier this year, however, lawmakers approved legislation extending the time limit on abortion from 12 to 14 weeks’ gestation.

Friday’s court ruling came shortly before President Biden and Secretary of State Antony Blinken headed to Europe for summits and meetings with allies which, while focused on Ukraine and other global issues, could also see concerns about the abortion issue raised by some.

In addition to Macron, other leaders taking part in the G7 and NATO summits who expressed public dismay about the court ruling include British Prime Minister Boris Johnson, who said it was “a big step backwards”; Canadian Prime Minister Justin Trudeau, who called the development “horrific”; and G7 summit host German Chancellor Olaf Scholz, who said the decision “reminds us that gender equality is still a long way off.”

“The right to a free abortion is one of the most fundamental rights there is,” she added.

Blinken told CNN’s “State of the Union” on Sunday that he had, unusually for him, decided to issue a statement regarding the ruling “because there are so many questions being asked around the world,” as well as within the State Department workforce.

“As secretary of state, I usually avoid commenting on Supreme Court rulings,” Blinken said in the earlier statement. “But today’s decision overturning Roe v. Wade has raised understandable questions and concerns across the world and within our workforce.”

“So let me be clear: under this administration, the State Department will remain fully committed to helping provide access to reproductive health services and advancing reproductive rights around the world,” he said.

“Since when does the Secretary of State issue statements on SCOTUS decisions?” Sen. John Cornyn (R-Texas) asked on Twitter. “Not enough on his plate ...?”