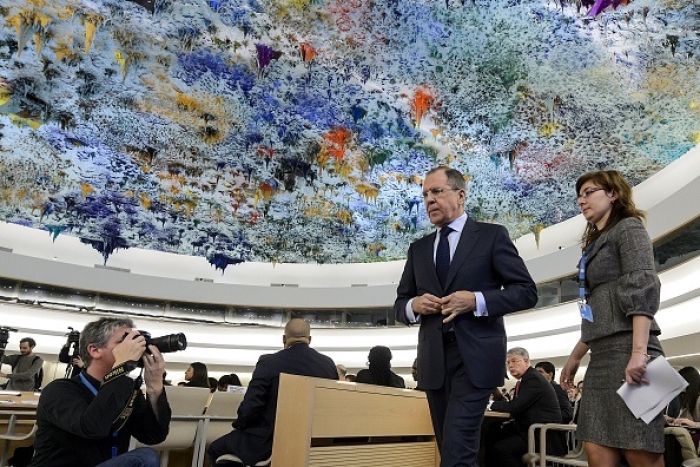 (CNSNews.com) – Calls to have Russia expelled from the U.N. Human Rights Council over its invasion of Ukraine received a boost Tuesday when a dozen members of the Senate Foreign Relations Committee urged the Biden administration to introduce a resolution to have the U.N. General Assembly vote on the matter.

“[I]t is our belief that Russia should not have a seat on what is supposed to be the premiere international human rights body,” the signatories, including the committee’s chairman and ranking member, Sens. Robert Menendez (D-N.J.) and Jim Risch (R-Idaho), wrote in a letter to Ambassador to the U.N. Linda Thomas-Greenfield.

“Swift action must be taken to show the world the United States and our allies will not stand for indiscriminate and unprovoked attacks on civilians and democracies,” they said. “The time has come for Russia to no longer have a seat on the council.”

U.N. rules provide for a member of the Geneva-based HRC to be removed for gross and systemic rights abuses, by a two-thirds vote of the General Assembly.

Although the council’s ranks have consistently included members with widely-condemned human rights records – among them China, Russia, Cuba, Pakistan, Eritrea, Sudan, Saudi Arabia, and Venezuela’s Maduro regime – only once in its 16-year history has a member been suspended – Muammar Gaddafi’s Libya, 11 years ago.

“We have seen the indiscriminate shelling of apartment buildings, hospitals, and schools and the slaughter of fleeing civilians,” the senators wrote. “The multitude of crimes committed by the Russian Federation, and by Vladimir Putin himself, demonstrates that the Russian government has no intention of upholding international human rights.”

“As such, it is time we consider whether the Russian Federation deserves to reap benefits from an organization whose mission is to promote and protect human rights around the world.”

Their call for the Biden administration to initiate a bid to remove Russia comes as the HRC wraps up its first regular session since the U.S. returned to the council.

The administration last year reversed its predecessor’s policy and stood for election in the fall, arguing that despite the HRC’s flaws the U.S. could most effectively work to improve matters from within. (Attempts by the Bush, Obama, and Trump administrations to reform the council were unsuccessful.)

Among those flaws is the absence of enforceable membership criteria. Although the General Assembly is encouraged to take into account candidates’ human rights records when voting to fill HRC seats, secret ballot elections have green-lighted numerous countries with poor human rights records, often by large majorities. 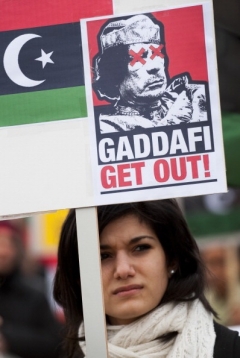 An anti-Gaddafi demonstration near the Human Rights Council in Geneva in February 2011. Weeks later Libya became the first (and so far, the only) HRC member to be suspended by a U.N. General Assembly. (Photo by Fabrice Coffrini/AFP via Getty Images)

As the HRC began the final week of its month-long session on Monday, Russia used the opportunity of a debate on racism to accuse the West of “Russophobia,” and complain about what it called “rabid anti-Russian sentiments fueled by politicians and the media of the United States and European countries.”

After listing alleged examples of Russian-speakers being harassed, the Russian delegate said, “If the Western community has no clue on how to resolve these problems, the Russian Federation and its regions, including the Republic of Crimea, are ready to demonstrate how interethnic and interreligious unity of peoples is achieved.”

Provocatively, the Russian delegation's statement was delivered virtually by Georgy Muradov, the deputy chairman of the council of ministers of Russian-occupied Crimea.

Muradov has been sanctioned since 2014 by the European Union, which says that he “played an important role in consolidating Russian institutional control over Crimea since the illegal annexation.”

Ukraine’s HRC representative, Kateryna Bakulina, protested Muradov’s participation, saying that allowing him to speak could be interpreted as recognizing Russia’s occupation of the Ukrainian peninsula.

But the presiding officer said that in line with regulations it was up to each member-state to designate the members of its delegation, and the chair could not “censor accreditation.”

“It’s rare, but once every decade the international community becomes so ashamed of a U.N. Human Rights Council member state slaughtering innocent people that they act to remove them,” tweeted Hillel Neuer, executive director of U.N. Watch.

“We got Gaddafi expelled in 2011,” he said. “I fear they’ll only expel Russia after a terrible new atrocity.”

During the HRC’s recent urgent debate on the war in Ukraine, Neuer called on the council to remove Russia immediately.

U.N. Watch, a Geneva-based non-governmental group, spearheaded a campaign to have Libya suspended in 2011. It has also led advocacy to have the Maduro regime removed.

Blinken:  Should Russia Be Allowed to Remain a Member of UN Human Rights Council? (Mar. 2, 2022)