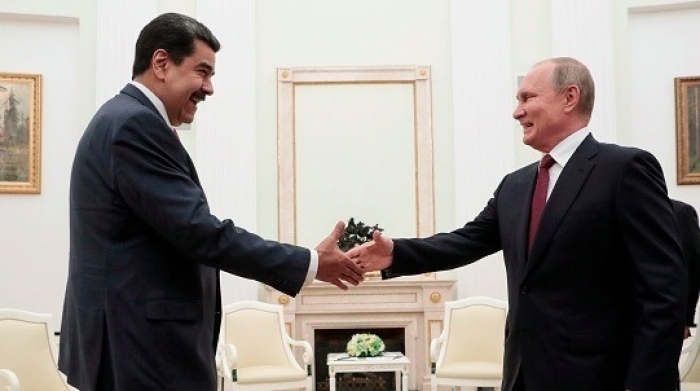 (CNSNews.com) – Senate Foreign Relations Committee Chairman Bob Menendez on Monday slammed the Biden administration’s tentative outreach to Venezuela’s leftist Maduro regime, saying the U.S. should not breath new life into the reign of a man he called “a cancer to our hemisphere.”

U.S. officials paid a secret weekend visit to Venezuela as the administration seeks alternative supplies of oil to help offset the effects on gas prices of a possible ban on Russian energy supplies.

“If the reports are true that the Biden administration is brokering the purchase of Venezuelan oil, I fear that it risks perpetuating a humanitarian crisis that has destabilized Latin America and the Caribbean for an entire generation,” Menendez said in a statement.

“Nicolás Maduro is a cancer to our hemisphere and we should not breathe new life into his reign of torture and murder,” said the New Jersey Democrat. “As such, I would strongly oppose any action that fills the pockets of regime oligarchs with oil profits while Maduro continues to deprive Venezuelans of basic human rights, freedoms, and even food.”

Indicted in the U.S. on narco-terrorism charges in 2020, Maduro is not recognized as Venezuela’s legitimate president by the U.S. or dozens of other countries.

White House Press Secretary Jen Psaki confirmed that the visit had taken place, saying both “energy security” and the fate of U.S. citizens held by the regime were on the table.

“The purpose of the trip that was taken by administration officials was to discuss a range of issues – including, certainly, energy security – but also to discuss the health and welfare of detained U.S. citizens,” she told a briefing.

Psaki said energy and the detained Americans were separate issues. Asked if the U.S. would make an easing of sanctions on Venezuelan oil contingent on the regime’s release of the prisoners, she did not give a direct answer.

“Obviously, we’re going to continue to do everything we can to bring anyone who is detained in Venezuela or any other part of the world home, but they happen through different tracks,” she said. “They’re all a part of the conversation with Venezuela writ large, but not at the same time.”

Among Americans being held in Venezuela are the so-called “CITGO six,” five U.S. citizens and one permanent resident who were executives of CITGO, a U.S. subsidiary of the Venezuelan -owned petroleum company PdVSA.

The six were detained in 2017, convicted of corruption and sentenced in late 2020 to lengthy prison terms. The U.S. has called repeatedly for their release.

In May 2020 former Green Berets Luke Denman and Airan Berry were among those arrested in connection with a failed plot purportedly aimed at toppling Maduro. The Trump administration denied involvement in the incident, while calling for their release.

Menendez said Biden, like every president before him, “has the solemn responsibility to seek to free Americans unjustly imprisoned abroad.”

“I urge the immediate release of the nine Americans who have languished in the Maduro regime’s hellish prisons for far too long,” he said. “However, as a matter of policy, the U.S. should always refrain from incentivizing our adversaries from taking American citizens hostages as bargaining chips.”

Maduro seems to be a curious choice for a U.S. outreach initiative linked to the crisis with Russia, given that he has long been among President Vladimir Putin’s most outspoken supporters in the international community.

Maduro blamed the U.S. and NATO for Putin’s decision to invade Ukraine, and last week he called Western-led sanctions against Russia “madness” and “a crime.”

His regime was also among the very few countries to recognize Russia’s annexation of Crimea in 2014, and the “independence” of the Russian-backed Georgian territories of South Ossetia and Abkhazia after the 2008 war there.

Then-Secretary of State Mike Pompeo hosts Juan Guaido, who the U.S. and more than 50 other countries regard as Venezuela's legitimate interim president, at the State Department in 2020. (Photo by Eric Baradat/AFP via Getty Images)

Striking a deal with Maduro would also mark an about-turn in U.S. policy. Accusing Maduro of electoral fraud, the Trump administration in 2019 recognized Venezuela’s National Assembly leader Juan Guaidó as interim president, in line with Venezuela’s constitution, and sanctioned the country’s oil industry.

That rejection of Maduro’s legitimacy is shared by more than 50 other countries, and the Biden State Department reaffirmed the policy just two months ago.

In March 2020, the U.S. Justice Department unsealed an indictment accusing Maduro and a dozen others of a conspiracy with Colombia’s Marxist FARC rebels, dating back to 1999, to “flood the United States with cocaine.”

There is a $15 million reward offered for information leading to his arrest and/or conviction. 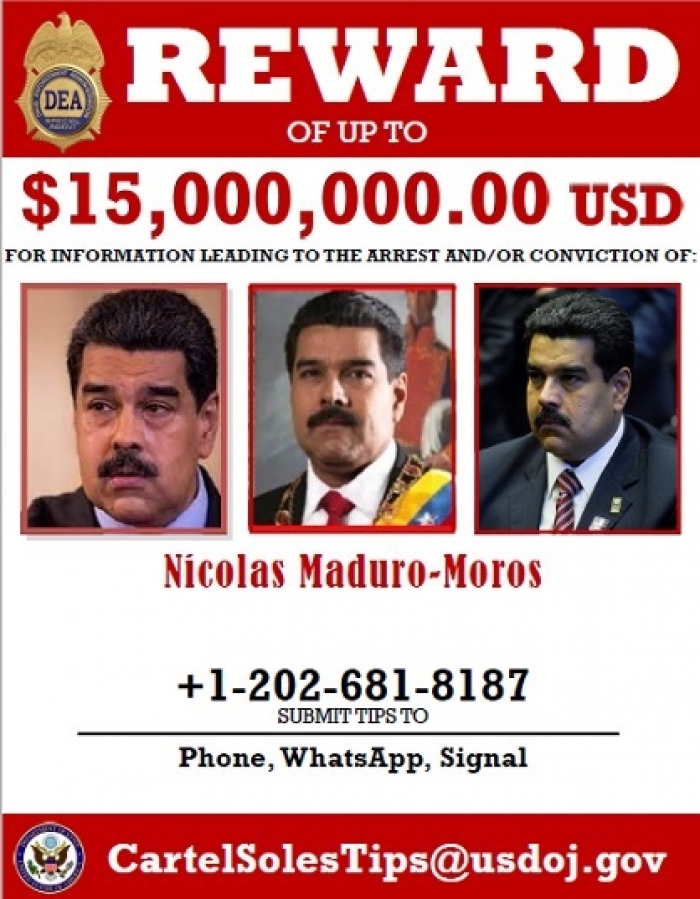 (Image: US Department of Justice)

“In the last month, the international community has come together in an unprecedented way to reject military aggression by Russia and stand up for democracy,” Menendez said.

“But the Biden administration’s efforts to unify the entire world against a murderous tyrant in Moscow should not be undercut by propping up a dictator under investigation for crimes against humanity in Caracas.”

“The democratic aspirations of the Venezuelan people, much like the resolve and courage of the people of Ukraine, are worth much more than a few thousand barrels of oil.”