(CNSNews.com) – Rep. Elissa Slotkin (D-Mich.) told chairman of the Joint Chiefs of Staff Gen. Mark Milley Wednesday that reports about potential cooperation with the Russians in Central Asia to respond to terrorist threats from Afghanistan makes the hair stand up on the back of some lawmakers’ necks.

She urged Milley to ensure that the House Armed Services Committee was kept informed “should there be any movement towards” such cooperation.

For the second consecutive day, reports about the possibility of the U.S. using Russian bases in Central Asia for “over-the-horizon” operations in Afghanistan were raised during hearings on the Hill involving Milley, Defense Secretary Gen. Lloyd Austin, and U.S. Central Command Commander Gen. Kenneth McKenzie.

The Wall Street Journal reported on Monday that Milley had discussed the matter during a meeting with his Russian counterpart in Finland last week.

The disclosure prompted a warning by senior Republican lawmakers that such coordination with the Russians would risks violating legal prohibitions on cooperation, linked to Russia’s military intervention in Ukraine.

During Wednesday’s hearing, Slotkin – a former Pentagon official and CIA analyst who served tours in Iraq – asked Milley about “reports that in our attempts to try to get ‘over-the-horizon’ posture in countries around Afghanistan, that we’ve had discussions with the Russians about some cooperation.”

“Can you help us understand that – for those many of us that just gives us – like, the hair on our necks starts to go up,” she said. “Can you explain to us what we’re discussing with the Russians, and what we are willing to do and not do with the Russians?”

Milley confirmed that he had met in Helsinki last Wednesday with Chief of Russian General Staff Gen. Valery Gerasimov, following discussions in Berlin with his NATO counterparts.

“And I can talk to you in a classified session about that,” he said. “But in the main, we’re not asking permission, we’re not negotiating, I guess is the word. But President Putin and President Biden had a conversation, and I was following up on that conversation at the direction of my superiors.”

Citing “informed sources,” the Russian business daily Kommersant reported in July that, at his summit with Biden in Geneva the previous month, Putin had raised the possibility of the U.S. making use of Russian bases in Kyrgyzstan and Tajikistan. The paper’s sources implied that the offer related to the deployment of drones for surveillance, rather than kinetic operations, in Afghanistan. 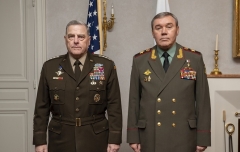 With the U.S. now having withdrawn all its forces from Afghanistan, the Pentagon is relying on “over-the-horizon” counterterror capabilities to contain threats that may emerge in Taliban-ruled country – but its nearest military bases are in the Gulf.

Russia has bases in Kyrgyzstan, Tajikistan and Kazakhstan, all former Soviet republics. After 9/11, with Putin’s acquiescence the United States obtained access to key bases in Uzbekistan (Karshi-Khanabad) and Kyrgyzstan (Manas). It was ejected from the former in 2005, and given notice to leave the latter in 2013, in both cases at the alleged prompting of the Kremlin.

“This is an issue that I believe came up during a conversation that the president had with President Putin, where President Putin offered to – to offer – to provide assistance,” Austin replied.

He said Milley had raised the issue with Gerasimov, to seek “clarification on what that offer was.”

“We are not seeking Russia’s permission to do anything,” Austin stressed.

Fischer said the reports provided “just another example that we see of the Biden administration – they’ve really left us in a terrible position, that we have to ask the Russians to be able to protect the United States from terrorists and we have to ask them to use their installations."

Austin repeated that “we’re not asking the Russians for anything.”

‘No return to business as usual’

Kremlin spokesman Dmitry Peskov declined to comment on the reports.

“I am not commenting on this topic in any way,” Russian media outlets quoted him as saying on Tuesday. “Everything that could be said about those talks has already been said.”

The senior Republicans in the House and Senate armed services and foreign relations committees earlier this week sent a letter to Austin and Secretary of State Antony Blinken asking for clarification on the reports.

They noted that defense authorization legislation in 2017 and 2021 “prohibits the use of funds to support U.S.-Russian military-to-military cooperation unless Russia has ended its aggression and occupation of Ukrainian territory and is abiding by the terms of the Minsk Protocols regarding the ceasefire in eastern Ukraine.”

“Given Russia has clearly not met these conditions, our efforts should remain focused on effective de-confliction, and not extend to military-to-military cooperation on counterterrorism,” the lawmakers wrote.

“As the United States and our NATO allies have repeatedly asserted since Russia’s invasion of Ukraine in 2014, until Russia demonstrates compliance with international law and its international obligations and responsibilities, there can be no return to ‘business as usual.’”