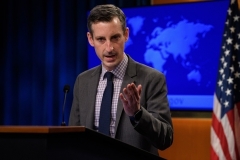 (CNSNews.com) – Faced with the implied suggestion that the Biden administration’s overtures to Iran were not working – given ongoing attacks by its proxies in Iraq and Yemen – State Department spokesman Ned Price on Wednesday blamed the provocations on the previous administration’s policy of pressuring, rather than talking to, the regime.

Price was reacting to an invitation to “grade” the administration’s approach to Iran so far. The question came during a daily press briefing held about 16 hours after another military base housing U.S. forces in Iraq came under rocket fire.

The Pentagon said around ten rockets were fired at the Al Asad base. No U.S. service personnel were injured, but an American civilian contractor died after suffering a “cardiac episode.” It was the second deadly rocket attack on an Iraqi base housing U.S. troops in just over a fortnight, with Iran-backed Shi’ite militia suspected of responsibility.

President Biden on February 25 ordered airstrikes against facilities used by Iranian-backed militias near the Syria-Iraq border in retaliation for the earlier attack, which targeting a base in Erbil.

At the briefing, Associated Press reporter Matt Lee noted that the administration has taken steps including expressing willingness to return to talks with Iran over the nuclear deal, and lifting the terrorist designation on the Iran-backed Houthis in Yemen. But the regime had rejected the talks offer and stepped up violations of the nuclear agreement, even as the Houthis had escalated rocket attacks into Saudi Arabia.

“If you were going to give a grade about how your approach to Iran has been since the administration began, what kind of grade would you give it?” Lee asked.

“I think our work with Iran is yet incomplete,” replied Price, adding that it “won’t be complete until we have what we are seeking, and that is a verifiable, permanent prohibition on Iran ever obtaining a nuclear weapon.”

Price said Lee had not mentioned “one other historical point.”

“They started in the aftermath of the so-called policy of ‘maximum pressure,’ a policy of maximum pressure that did not avail itself of a diplomatic opening of any sort. So to attribute what we have seen over the past several weeks to this administration, I think you are missing – anyone, I should say, would be missing the forest for the trees.”

Price said that the Trump administration’s pressure policy had sought to deliver a better nuclear deal, to unite the U.S. with its partners and allies, and “to cow Iran and its proxies into submission.”

“And in fact, the opposite of all of those things has happened.”

“But all of your overtures that have been made since the – since January 20th, the situation has not gotten any better,” Lee said. “Can you at least acknowledge that?”

Rocket attacks by militias in Iraq did pick up after the Trump administration escalated pressure on Iran in 2019. But U.S. forces in Iraq have come under attack from Iranian proxies periodically for years. One of the groups blamed for the Feb. 15 attack on a base in Erbil has U.S. blood on its hands going back to the George W. Bush administration.