(CNSNews.com) – The State Department on Wednesday played down reports that India may participate in Russia-led joint military exercises, saying countries make sovereign decisions and the U.S. recognizes that it will take time for longstanding defense partners of Moscow to draw away from those relationships.

“This is not flipping a light switch,” said department spokesman Ned Price. “Especially for countries that have historical relationships with Russia, relationships that – as is the case with India – extend back decades, it is going to be a long-term proposition to reorient foreign policy away from Russia.”

The Indian government has not yet confirmed participation in the Vostok (“East”) 2022 drills in Russia’s far east from August 30-September 5.  But China’s defense ministry announced earlier in the day that, in addition to its People’s Liberation Army (PLA), “countries including India, Belarus, Tajikistan, and Mongolia will also send troops for the exercise.”

Queries sent to the Indian ministry of external affairs and ministry of defense brought no response by press time.

India, whose defense ties with the then-Soviet Union date back to the 1960s, has frequently taken part in military drills with the Russians, most recently participating in the Zapad (“West”) 2021 exercises in western Russia and Belarus last September.

However, these will be the first joint war games involving Russia since the Kremlin sent its armed forces into Ukraine – an invasion which the U.S. has said repeatedly should mean an end to “business as usual” with Moscow.

At the State Department daily press briefing, Price was asked if the participation of “a U.S. partner like India” in Vostok 2022 represented a failure in the U.S. attempts to isolate Russia.

“Every country around the world is going to make its own sovereign decisions based on its own assessment of its interests and its values,” Price said.

“We also recognize that there are countries around the world that have longstanding relationships, including security relationships, with countries like Russia, for example. And reorienting a country’s foreign policy or a country’s security establishment or defense procurement practices away from a country like Russia is not something that we can do overnight.”

A reporter pointed out that since the invasion of Ukraine, the U.S. has argued that “it can’t be business as usual with the Russians.” He noted that India was a close partner of the U.S. and a member of the Quad, the Indo-Pacific security alliance whose other participants are the U.S., Japan, and Australia.

Price said in response that the U.S. has “worked very closely with our Indian partners” and that the Indians have “very clearly” signaled support for “what should be the inviolable principle of state sovereignty.”

“It’s not for me to speak to another country’s foreign policy,” he said. “But what I can do is point out what we have heard – statements from India. We have seen countries around the world speak clearly, including with their votes in the U.N. General Assembly, against Russia’s aggression in Ukraine.”

(In fact, in all three votes in the General Assembly earlier this year relating to the Ukraine war, India abstained – a March 2 resolution condemning the invasion, which passed 141-5; a March 24 resolution blaming the “dire” humanitarian situation on Russia, which passed 140-5; and an April 7 resolution suspending Russia from the U.N. Human Rights Council, which passed 93-24.)

India, the world’s third-largest importer of crude oil, has also significantly increased its purchases of Russian oil since the invasion began in February. 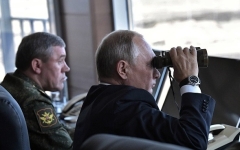 When it announced the exercises late last month, Russia’s defense ministry they would bring together “the Airborne Force, long-range and military transport aircraft, and also military contingents of other countries.”

It rejected any suggestion that it was overstretched due to the war in Ukraine.

“We are drawing your attention to the fact that only a part of the armed forces of the Russian Federation is engaged in the special military operation and its size is quite sufficient to implement all the tasks set forth by the commander-in-chief,” the ministry said in a statement.

Belarus, one of Russia’s closest military allies and a facilitator of its invasion of Ukraine, has confirmed that its troops will take part in Vostok 2022.

China’s participation comes at a time of escalated tensions between Beijing and Washington, after China reacted to House Speaker Nancy Pelosi’s visit to Taiwan with heightened rhetoric and the launching of its biggest ever wargames around the island.

China’s defense ministry said Wednesday the planned PLA involvement in Vostok 2022 “is unrelated to the current international and regional situation, but designed to deepen practical and friendly cooperation with the militaries of participating countries, enhance the level of strategic coordination and strengthen the ability to cope with various security threats.”

The previous Vostok exercises, billed at the time as the biggest Russian exercises since the end of the Soviet era, took place near Russia’s borders with China and Mongolia in 2018. China took part then as well, contributing more than 3,000 personnel.