State Dep’t: ‘If Russia Invades Ukraine, One Way or Another, Nord Stream 2 Will Not Move Forward’ 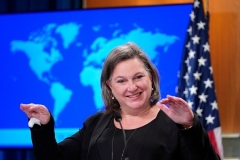 (CNSNews.com) – A senior State Department official said Thursday that the Nord Stream 2 pipeline “will not move forward” if Russia invades Ukraine, one of the clearest statements yet that the divisive project’s future is on the line, but words that stop short of saying that it will be scrapped altogether.

“If Russia invades Ukraine, one way or another, Nord Stream 2 will not move forward,” undersecretary of state for political affairs Victoria Nuland told a press briefing, repeating verbatim words that State Department spokesman Ned Price used while speaking to NPR earlier in the day.

Asked how she could make that assertion with confidence, Nuland replied, “We’ve had extensive consultations at every level with our German allies. I’m not going to get into the specifics here today, but we will work with Germany to ensure that the pipeline does not move forward.”

For months, critics in the U.S. Congress have been calling for a halt to the pipeline, which aims to carry Russian natural gas to Germany under the Baltic seabed. But the Biden administration has taken a different approach, built on an agreement with Germany designed to mitigate potential risks to Ukraine from any attempt by Moscow to use energy supplies or Nord Stream 2 as a weapon.

As tensions between Russia and the West have risen following the massing of Russian troops near Ukraine’s borders, the State Department has argued that Nord Stream 2 is now in fact a source of leverage against President Vladimir Putin, since he wants to see it operating.

Once operational, Nord Stream 2 would double the amount of Russian gas currently provided to Germany and western Europe. The pipeline is completed, but awaits final certification from German regulators before gas can begin to flow.

That process was suspended in November, with the regulator saying that in order to comply with German law, the assets and resources would have to be transferred to a subsidiary that must “fulfil the requirements of an independent transmission operator.”

On Wednesday, Swiss-based consortium Nord Stream 2 AG announced the formation of a subsidiary, Gas for Europe, which will own and operate the 33-mile section of the 760-mile pipeline that is located in German territorial waters.

Map shows the overall route of the Russia-to-Germany Nord Stream 2 gas pipeline, with the portion lying in German territory highlighted on the left. (Image: NS2/Gas for Europe)

Russia has a history of using energy supplies as a weapon in political disputes, and critics fear Putin will use the new pipeline to further deepen Europe’s energy dependence. It could also potentially harm Ukraine, which earns badly-needed revenues from Russian gas crossing its territory through existing pipelines.

Nations in eastern Europe have called for a halt to the project, as has the European Parliament by large margins in three separate votes.

But former German Chancellor Angela Merkel defended it as a purely economic project, a stance echoed by her successor, Olaf Scholz.

Last year the Biden administration controversially waived sanctions against the key players in the project – Nord Stream 2 AG, which is led by the Russian state-owned Gazprom, and its corporate officers including its German CEO, a longstanding Putin associate.

The administration said targeting them would have harmed relations with Germany, an important ally. It also argued that the project was already too close to completion to stop. (Earlier, the threat alone of U.S. sanctions was credited for bringing work to an abrupt halt for most of 2020, after President Trump signed bipartisan sanctions legislation into law.)

Last summer the administration and Merkel’s government concluded an agreement saying they would use sanctions and other measures to counter any Russian attempt to use Nord Stream 2 to Ukraine’s detriment, “or commit further aggressive acts against Ukraine.”

Germany under the spotlight

Germany’s cautious response to the Russian troop buildup near Ukraine has drawn criticism in Europe, and in recent days White House, State Department, and Pentagon press briefings have all featured questions about Germany’s reliability as an ally.

The press secretaries reiterated that Germany is onboard, noting it had signing up to multilateral statements warning of tough consequences for Moscow. The State Department also defended Berlin’s decision not to send “lethal weapons” to Ukraine, saying different allies were making different contributions.

(Germany blocked Estonia from transferring German-origin artillery to Ukraine, although it did agree to send the Ukrainians 5,000 helmets.)

The White House confirmed Thursday that Scholz will visit on February 7, to discuss with Biden, among other things, “their shared commitment to both ongoing diplomacy and joint efforts to deter further Russian aggression against Ukraine.”

Amid criticism of Germany’s stance, German Ambassador to the U.S. Emily Haber posted a tweet on Wednesday referring to last July’s bilateral agreement and implying that Scholz and Foreign Minister Annalena Baerbock – whose respective Social Democrat (SPD) and Greens parties have differences over Nord Stream 2 – were united on the issue.

“The US and Germany jointly declared last summer: if Russia uses energy as a weapon or if there is another violation of Ukraine’s sovereignty, Russia will have to pay a high price,” Haber tweeted.

“[Scholz] and [Baerbock] stated clearly: nothing will be off the table, including Nord Stream 2.”

The SPD has a somewhat awkward history regarding Russian energy supplies.

In 2016 Schroeder became chairman of the board of directors of Nord Stream 2, and the following year he was nominated to the board of Rosneft, Russia’s state-owned oil company and largest oil producer, which is sanctioned by the U.S. and E.U. over the Kremlin’s annexation of Crimea.