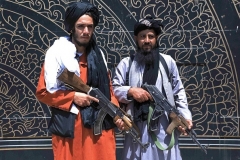 Taliban fighters stand guard at the provincial governor's office in Herat on August 14, 2021. (Photo by AFP via Getty Images)

(CNSNews.com) – For months the State Department has been saying that the United States – and many other countries – will not recognize a government in Afghanistan that takes power “by force.”

But with a Taliban takeover “by force” apparently a fait accompli, on Monday the department focused instead on “the actions of the Taliban,” saying the U.S. “would be able to work with” a government that respects the rights of its people including women, and does not harbor terrorists.

The U.N. Security Council in a statement called for the establishment of “a new government that is united, inclusive and representative – including with the full, equal and meaningful participation of women.”

It also called for “urgent talks to resolve the current crisis of authority in the country and to arrive at a peaceful settlement through an Afghan-led, Afghan-owned process of national reconciliation.”

The reality on the ground is that a jihadist group that seized control through a military campaign – even if in many parts of the country resistance was negligible – looks set to be the de facto authority in Kabul, and governments are going to have to decide how to respond.

Already on Sunday, hours after Taliban fighters entered the capital, Secretary of State Antony Blinken did not mention the condition of not having taken power “by force” when answering a question about potential recognition of a Taliban government.

Asked on CNN’s “State of the Union” whether the Biden administration would ever recognize the Taliban as “a legitimate government,” Blinken replied, “A future Afghan government that upholds the basic rights of its people and that doesn’t harbor terrorists is a government we can work with and recognize.”

Conversely, any government that does not “uphold the basic rights of its people, including women and girls” and “that harbors terrorist groups that have designs on the United States or allies and partners” would not be recognized, he added.

“You’ve said before that you will not recognize any government or assist any government that comes to power by force,” a reporter noted. “Since the Taliban basically walked into Kabul and the president fled, are you in a position to say whether or not you might be willing to recognize a government that emerges from this, aside from the U.N. calls?”

Price pointed to the wording in the Security Council statement, noting that it was “not always an easy feat” to get the council’s members to speak with one voice.

The converse is also true,” he added. “We are not going to support a government that does not do that.”

A senior Taliban official told Afghanistan’s Tolo news agency that talks were underway in the Qatari capital, Doha, about a future government, including its structure and its “name.”

According to the Pahjwok news agency, some of those involved in the talks with the Taliban are former President Hamid Karzai and the chairman of the high council for national reconciliation council, Abdullah Abdullah.

Unlike President Ashraf Ghani, Karzai and Abdullah did not flee ahead of the Taliban advance on Kabul. (Abdullah criticized Ghani, his political rival, for abandoning the country.)

Also reportedly involved in the talks in Doha is Gulbuddin Hekmatyar, the controversial leader of Hezb-e-Islami.

Hekmatyar, a Pashtun warlord, is a U.S.-designated “specially designated global terrorist” with longstanding ties to al-Qaeda and the Taliban. In 2016 he agreed to end his insurgency and signed a peace deal with the government, before running unsuccessfully for the presidency in 2019.

Discussions on the “name” of a future government will center on the Taliban’s insistence on styling itself the “Islamic Emirate of Afghanistan” – the name under which it ruled most of the country for roughly five years until toppled by U.S. forces in November 2001. That regime was internationally shunned, although Pakistan, Saudi Arabia and the UAE did grant recognition.

When the Trump administration signed an agreement with the Taliban in Doha in February 2020, the Taliban wanted that name used, and the U.S. refused. As a compromise the group was awkwardly described – 16 times – as “the Islamic Emirate of Afghanistan which is not recognized by the United States as a state and is known as the Taliban.”

Early this month the 15 members of the U.N. Security Council ended a statement on the crisis by declaring that they “do not support the restoration of the Islamic Emirate.”

The State Department has said repeatedly that a government seizing power in Afghanistan by force would not be recognized.

At a briefing last Wednesday, Price said talks then underway in Doha involving representatives of countries in the region and beyond were pressing for a commitment from participating countries “not to work with any entity that takes the country by force.”

“A major item on the agenda is making very clear to the Afghan parties and to the rest of the world that the international community will not accept any government that seeks to take control of Afghanistan by force,” he said.

Price said the Taliban wants sanctions against its leaders lifted, the freedom to travel and to engage in international diplomacy.

“None of that would be possible were they to continue down this path, were they to attempt to take the country by force.”

Price then gave a list of “countries that in one form or fashion have made the point that any government that seeks to take Afghanistan by force will lack international legitimacy.”

At a Security Council meeting on August 6, U.S. Ambassador Jeffrey DeLaurentis said a military takeover by the Taliban would leave it internationally isolated.

“The Taliban must hear from the international community that we will not accept a military takeover of Afghanistan or a return of the Taliban’s Islamic Emirate,” he said.

On August 4, Price told a briefing that “the international community won’t recognize a group, a future Afghan government, that seizes power through violence.”

On July 23, he said, “the world will not accept the imposition by force of a government in Afghanistan.”

Price used near-identical wording at briefings on July 12 and July 6. Back in April, Blinken said it was “very important that the Taliban recognize that it will never be legitimate and it will never be durable if it rejects a political process and tries to take the country by force.”