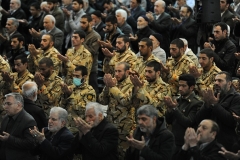 (CNSNews.com) – State Department spokesman Ned Price on Wednesday sidestepped an invitation to rule out the possibility that the Trump administration’s designation of the Islamic Revolutionary Guard Corps (IRGC) as a foreign terrorist organization could be up for negotiation as the U.S. looks to return to the Iran nuclear deal.

What Price did say during his daily press briefing – repeatedly – was that as the U.S. seeks to bring Iran back into compliance with the 2015 agreement known as the Joint Comprehensive Plan of Action (JCPOA), it was prepared to take the steps necessary for a U.S. return to compliance too, “including by lifting sanctions that are inconsistent with the JCPOA.”

The attempt to achieve what the administration is calling “compliance-for-compliance” is at the center of talks currently underway in Vienna. A U.S. team led by special envoy for Iran Robert Malley is discussing this with the other parties to the JCPOA, who in turn are discussing it separately with Iranian representatives.

For the U.S., compliance entails lifting the nuclear-related sanctions which President Trump restored after exiting the deal in 2018; for Iran, compliance means returning to the restrictions on its nuclear activities that it agreed to under the JCPOA, but which it began to abandon in stages after Trump withdrew.

An issue of great importance to the regime in Tehran, however, is one that is not related to the nuclear deal at all – the Trump administration’s April 2019 designation of the IRGC as a foreign terrorist organization (FTO).

It was the first time the U.S. had ever added an entity belonging to a foreign government to the blacklist, and it prompted both letters of protest to the United Nations and threats of retaliation against U.S. forces in the region.

Price was asked whether the issue of revoking the FTO designation was “on the table” in the talks, but did not respond directly, instead repeating the talking-point that the U.S. was “prepared to lift sanctions that are inconsistent with the JCPOA.”

“Can you say then that removing the FTO designation from the IRGC is not on the table here at all?” asked Associated Press reporter Matt Lee.

Minutes earlier, Lee had asked whether the administration considered sanctions imposed on the regime by the previous administration in relation to terrorism, human rights, or ballistic missiles to be “inconsistent with the JCPOA.”

Price did not respond directly.

“We are prepared to take the steps necessary to return to compliance with the JCPOA, including by lifting sanctions that are inconsistent with the JCPOA,” he said. “I’m not in a position here to give you chapter and verse on what those might be. That is precisely why we have agreed to engage in diplomacy to this effect. The precise nature of any sanctions relief is the subject of – of diplomacy.”

The assertion that sanctions relating to the Iranian regime’s support for terrorism, human rights violations and ballistic missile activity were not covered by the JCPOA was hammered home by the Obama-Biden administration when it was working to sell the deal to skeptical members of Congress in 2015.

As then-Secretary of State John Kerry led that effort, he stressed repeatedly that non-nuclear sanctions would not be affected by the nuclear agreement.

“U.S. sanctions on Iran for terrorism, human rights abuses, and ballistic missiles will remain in place under the deal,” said an April 2015 State Department fact sheet on the JCPOA, a point emphasized again in a subsequent White House document. (President Obama did in fact use existing authorities in 2016 to impose sanctions relating to Iran’s ongoing ballistic missile launches.)

Price did stress that the administration “will not offer any unilateral gestures or incentives to sweeten any sort of deal or to induce Iran to – back to the negotiating table or to a better position at that negotiating table.”

He also stated that the administration was committed to hold Iran to account for behavior including its support for terrorism.

Precisely for that reason, Price said, the administration sees mutual return to JCPOA compliance as a necessary but insufficient first step – “because we seek not only a longer and stronger deal, but over the longer term, working with partners in the region, follow-on agreements to address these very issues.”