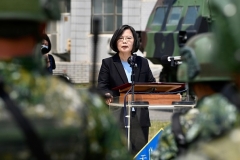 Taiwanese President Tsai Ing-Wen during a visit to a military base last month. (Photo by Sam Yeh/AFP via Getty Images)

(CNSNews.com) – Taiwan has formally asked the World Health Organization to allow it to take part in the U.N. agency’s forthcoming annual assembly, buoyed by strong expressions of support from the United States amid the COVID-19 pandemic.

China, however, has doubled down on its opposition to a move that would underscore the island democracy’s de facto independence, insisting that Taiwan is a part of China and that its participation in any international forum is dependent on Beijing’s consent.

Taiwan’s health ministry confirmed at the weekend it has written to WHO director-general Tedros Adhanom Ghebreyesus, requesting an invitation to take part in the 73rd World Health Assembly (WHA).

The WHA is the WHO’s supreme decision-making body. Scheduled to take place during the week of May 17-21, this year’s event will be a virtual one instead of the usual gathering in Geneva. 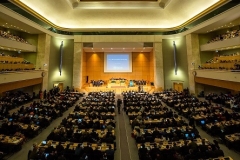 The WHO's World Health Assembly meets in Geneva each May. (Photo: WHO/L. Cipriani)

As the U.S. and China continue to clash over the latter’s handling of the outbreak, tussling over Taiwan is underway in New York, where the U.S. mission in a series of Twitter posts on Friday made its case for Taiwan’s inclusion, including:

“The U.S. believes firmly that Taiwan belongs at the table when the world discusses COVID-19 and other threats to global health.”

“Is it too much to ask that Taiwan be permitted to share their expertise, their commitment, with the rest of the world? Will the world succumb to the PRC’s pressure and intimidation?”

“China’s response to the outbreak of COVID-19 has been to hide the facts, muzzle its scientists, and censor discussion. Taiwan’s response has been and continues to be a model for the world.”

“Barring Taiwan from setting foot on UN grounds is an affront not just to the proud Taiwanese people, but to UN principles.”

China’s U.N. mission hit back, accusing the U.S. of violating the 1971 U.N. General Assembly resolution that expelled Taiwan and gave the “China” seat at the U.N. to the communist government in Beijing.

The mission said the U.S. stance “gravely interferes with China’s internal affairs and deeply hurts the feelings of the 1.4 billion Chinese people.”

“The government of the People’s Republic China is the sole legal government representing the whole of China, and Taiwan is an inalienable part of China,” it declared, adding that this “one-China” policy enjoys popular support and is “widely respected by U.N. member-states.”

(China refuses to have diplomatic relations with any country that recognizes Taiwan’s sovereignty, and currently just 15 small developing nations do.)

The U.S. is the WHO’s biggest funder by far. New funding has been suspended this fiscal year, pending review of the agency’s handling of the pandemic.

Taiwan’s representative office in Geneva thanked the U.S. for its support, and pushed back at the Chinese statement. It said the 1971 resolution dealt only with the issue of China’s representation at the U.N., and does not say that “Taiwan is a part of China” or authorize China to represent Taiwan’s 23 million people at the U.N.

Taiwan’s diplomatic isolation has cost it dearly in the health field. When the SARS coronavirus emerged in China in 2003, the island nation grappled with the outbreak for two months before China agreed to “allow” the WHO to send experts to help. The disease ultimately killed at least 770 people in 30 countries, 70 of them in Taiwan.

After that experience, Taiwan acted swiftly when signs of a new outbreak appeared at the end of last year, setting up a national emergency operations center and border controls at the beginning of January, quarantining likely cases early on.

Although just 80 miles from mainland China at its nearest point, Taiwan as of Monday had confirmed only 436 cases of COVID-19, and six deaths attributed to the virus. It has also sent millions of facemasks to badly-affected countries, including the U.S., Canada, and countries in Europe.

Like other U.N. bodies, the WHO restricts full membership to U.N. member-states only. But Taiwan since 1997 has each year requested observer status at the WHA.

Its bids have mostly been unsuccessful, although from 2009-2016 Beijing agreed it could attend as an observer. It withdrew its consent after the pro-independence Democratic Progressive Party returned to power, and Taiwan has been shut out again since 2017.

In response to criticism after a senior WHO official dodged questions about Taiwan, the organization said in late March the question of Taiwan’s membership is up to member-states, not WHO staff.

But Tedros could, in fact, invite Taiwan to attend the WHA as an observer without China’s express permission. The WHO long ago confirmed that the director-general has the discretion to do so.

No director-general has risked angering Beijing in that way, however, and Tedros is viewed by critics in the U.S. and Taiwan as even more deferential to China than his predecessors.

Past WHAs have seen entities other than U.N. member states invited to take part as observers, including the Palestine Liberation Organization, the International Committee of the Red Cross, and the Knights of Malta.