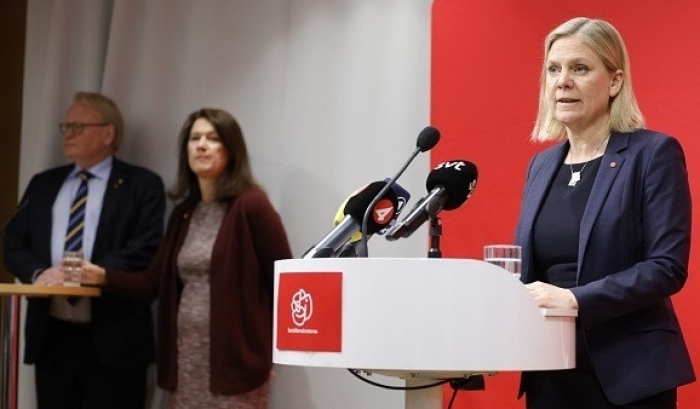 (CNSNews.com) – In yet another consequence of Russia’s invasion of Ukraine, Sweden’s ruling party agreed Sunday to shed a long-cherished policy of military non-alignment in favor of applying to join NATO, and Secretary of State Antony Blinken expressed optimism that the alliance would welcome both Sweden and Finland.

“There is very strong consensus for bringing Finland and Sweden into the alliance if they choose to formally apply,” Blinken told reporters in Berlin after discussions with NATO counterparts.

Finland the same day confirmed its decision to apply for membership, and a final decision is expected shortly from Stockholm, now that the governing Social Democrats have decided in favor. Major opposition parties are also supportive, so parliamentary backing is largely assured.

“And Russia’s unprovoked invasion of Ukraine is not only illegal and indefensible, it also undermines the European security order that Sweden builds its security on,” she said.

Asked about possible retaliation from Russia, Andersson acknowledged Sweden could be vulnerable during the interim period between applying to join NATO and accession, but added that that is a situation Sweden already faces.

She said Russia could target Sweden with cyber or “hybrid” attacks, but “that’s up to Russia and President Putin.”

“It is the case that nuclear deterrence is part of the NATO doctrine – we can’t ignore that. But at the same time NATO membership does not prevent Sweden from being an active voice for nuclear disarmament and against nuclear weapons.”

(NATO’s official position is that it will remain a nuclear alliance “as long as there are nuclear weapons in the world, but will do so at the lowest possible level consistent with our deterrence and defence obligations, with an appropriate mix of nuclear and conventional forces.”)

Meanwhile Blinken played down concerns that Turkey would block the applications by the neighboring Nordic nations – something any of the 30 current NATO allies could do as membership decisions require consensus.

Ankara has chosen to use its leverage to demand that Sweden and Finland stop supporting the Kurdistan Workers’ Party (PKK), a group that has waged a separatist armed struggle in south-eastern Turkey for more than three decades and is viewed by Turkey (and the U.S.) as a terrorist organization.

But Blinken, who met with his Turkish counterpart Mevlut Cavusoglu while in Germany, said while there was “an ongoing conversation” underway over the reported areas of concern, “the bottom line is this – when it comes to the membership process, I am very confident that we will reach consensus.”

NATO Secretary-General Jens Stoltenberg and Italian Foreign Minister Luigi Di Maio in separate remarks were similarly convinced that the wrinkles with the Turks would be ironed out quickly.

“Turkey has made it clear that their intention is not to block membership,” said Stoltenberg. “And therefore, I’m confident that we will be able to address the concerns that Turkey has expressed in a way that doesn't delay the membership or the accession process.”

Stoltenberg, who briefed the press jointly with German Foreign Minister Annalena Baerbock by video link due to COVID-19, said he believed the 30 allies would endorse the Finnish and Swedish applications in record time.

“Many allies have stated that they will find fast tracks” to approving the projected newcomers, he said. While ratification by 30 legislatures would unavoidably take “some time,” the hope was to have the process completed “faster than we have seen before.”

Finnish Foreign Minister Pekka Haavisto, who attended the NATO foreign ministers’ meeting, said it was gratifying to see that some allies were even competing to see who would be first to ratify his country’s NATO application.

‘Ukraine can win this war’

In his remarks to the press Stoltenberg offered a broadly upbeat assessment of the unfolding situation in Ukraine.

“Russia’s war in Ukraine is not going as Moscow had planned,” he said. “They failed to take Kyiv. They are pulling back from around Kharkiv, their major offensive in the Donbass has stalled. Russia is not achieving its strategic objectives.”

While Russian President Vladimir Putin’s aim was defeat Ukraine, weaken NATO and divide Western allies on either side of the Atlantic, he said, “Ukraine stands, NATO is stronger than ever, Europe and North America are solidly united.”

NATO will hold its annual summit at the end of next month in Madrid. Stoltenberg said important decisions would be made there, “to reinforce NATO’s deterrence and defense to reflect the new security reality in Europe.”