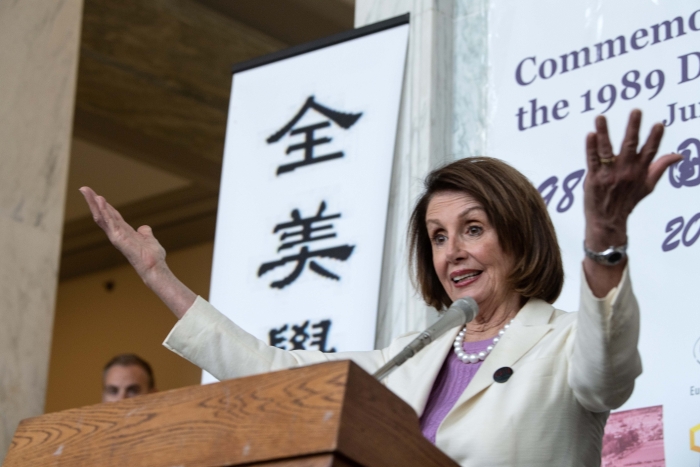 House Speaker Nancy Pelosi, a longstanding critic of the CCP, speaks at a 2019 event in Washington marking the 30th anniversary of the Tiananmen Square massacre. (Photo by Nicholas Kamm/AFP via Getty Images)

(CNSNews.com) – Has House Speaker Nancy Pelosi called off controversial plans to visit Taiwan? The answer was unclear Sunday as she began her Asia trip with a statement that mentioned stops in four countries – but not the island democracy that Beijing considers its own.

Released when her trip had already begun with a stopover in Hawaii, the statement said a Pelosi-led congressional delegation plans to visit Singapore, Malaysia, South Korea, and Japan, “to reaffirm America’s strong and unshakeable commitment to our allies and friends in the region.”

“Under the strong leadership of President Biden, America is firmly committed to smart, strategic engagement in the region, understanding that a free and flourishing Indo-Pacific is crucial to prosperity in our nation and around the globe,” Pelosi said.

Since reports of a planned visit to Taiwan first appeared a fortnight ago, Chinese officials have repeatedly warned against a visit by the speaker, with the defense ministry declaring that “the Chinese military will never sit idle by” if it goes ahead.

After a phone conversation Thursday between Biden and Chinese President Xi Jinping, China’s foreign ministry quoted Xi as having warned – in the context of the dispute over Taiwan – that “public opinion cannot be defied. Those who play with fire will perish by it. It is hoped that the U.S. will be clear-eyed about this.”

A leading propagandist for Chinese Communist Party media went so far as to suggest that the People’s Liberation Army (PLA) shoot down Pelosi’s aircraft, in the event it is escorted by U.S. fighter planes and ignores other warnings.

Twitter took down former Global Times editor-in-chief Hu Xijin’s tweet for violating its rules, but by then it had been widely circulated: “If US fighter jets escort Pelosi's plane into Taiwan, it is invasion. The PLA has the right to forcibly dispel Pelosi's plane and the US fighter jets, including firing warning shots and making tactical movement of obstruction. If ineffective, then shoot them down.” 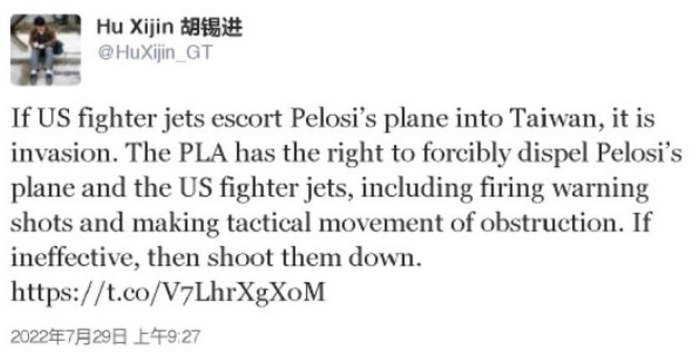 National Security Council coordinator for strategic communications John Kirby said late last week there was no need for China’s “bellicose rhetoric,” as there has been no change to U.S. policy on Taiwan.

Beijing views Taiwan as a rebellious province that must be reincorporated into the CCP-governed “one China,” and works strenuously to isolate it diplomatically, demanding the same approach from the international community.

The carefully-balanced U.S. policy since President Carter in 1979 cut ties with Taipei and recognized Beijing is that the U.S. acknowledges China’s position on “one China,” but without explicitly recognizing Beijing’s claims to Taiwan –  and while seeking a peaceful resolution of the dispute.

The U.S. is also committed under the 1979 Taiwan Relations Act to protect the island from unprovoked aggression and to provide it with military aid.

Pelosi, whose position makes her second in the line of succession to the presidency, would be the most senior U.S. official to visit Taiwan since Republican Speaker Newt Gingrich made the trip in 1997.

Up to now she has neither confirmed nor denied plans to visit Taiwan, citing security protocols. Pelosi, an outspoken critic of the CCP’s human rights record, had reportedly planned to travel there in April, before postponing the trip after testing positive for COVID-19.

The White House has not publicly called on Pelosi not to travel to Taiwan, although Biden did say on July 20 that “the military thinks it’s not a good idea right now.”

On Friday, Secretary of State Antony Blinken spoke about a need for wisdom in managing differences with China over Taiwan.

“We have many differences when it comes to Taiwan, but over the past 40-plus years, we have managed those differences and done it in a way that has preserved peace and stability and has allowed the people on Taiwan to flourish,” he said at the State Department.

“It would be important as part of our shared responsibility to continue to manage this in a wise way that doesn’t create the prospect for conflict.”

Lawmakers on both sides of the aisle have expressed support for Pelosi visiting Taiwan if she chooses to do so.

“It’s not the place of the Biden administration to dictate where the speaker and members of Congress can travel,” Rep. Richie Torres (D-N.Y.) told ABC’s “This Week” on Sunday.

“If there are security concerns, those concerns can be presented to us in a private setting, but we have to be careful not to send the message that the United States can easily be bullied by China or can be intimidated by bellicose rhetoric,” he said.

“The Chinese Communist Party does not dictate travel plans for Members of Congress,” tweeted Sen. Todd Young (R-Ind.) earlier. “Speaker Pelosi should travel to Taiwan whenever she wants. Bending the knee to Beijing only invites aggression. We must stand with Taiwan.”

In response to Hu Xijin’s tweet about the PLA shooting down Pelosi’s plane, former Secretary of State Mike Pompeo said Biden should fully support a visit by the speaker to Taiwan.

“The Biden administration caving to the CCP would display very dangerous weakness. We are no one’s satellite state,” he tweeted. “This is a matter between two sovereign Nations - America and Taiwan.”

In her statement, Pelosi said her delegation would during their visit to Singapore, Malaysia, South Korea, and Japan, discuss “peace and security, economic growth and trade, the COVID-19 pandemic, the climate crisis, human rights and democratic governance.”

She said the trip had begun in Hawaii with a briefing from U.S. Indo-Pacific Command leadership and a visit to the Pearl Harbor Memorial.