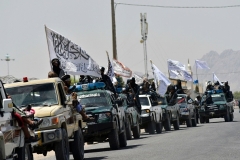 A convoy of Taliban fighters in Kandahar. (Photo by Javed Tanveer/AFP via Getty Images)

(CNSNews.com) – The Taliban on Tuesday announced an “acting” government and cabinet including wanted and sanctioned terrorists, suspected mass murderers of ethnic and religious minorities – and no women.

The man named as “acting” interior minister, Sirajuddin Haqqani, leads the Haqqani Network, a U.S.-designated foreign terrorist organization. The U.S. Treasury Department named him a specially designated global terrorist in 2011, he’s wanted by the FBI, and the State Department is offering a reward of up to $10 million for information that brings him to justice.

Sirajuddin Haqqani’s terrorist group, with the covert support at times of Pakistan’s Inter-Services Intelligence (ISI) agency, is responsible for some of the deadliest attacks on U.S. and coalition forces in Afghanistan over the past two decades.

The ministry that he will head is the one that, in conjunction with the foreign ministry, will likely have the greatest say in whether Afghans will be allowed to travel freely.

Taliban spokesman Zabihullah Mujahid – named as “acting” deputy information and culture minister – said on Tuesday that no Afghan will be allowed to leave the country until the interior and foreign ministries are fully operational and the Kabul airport is back up and running.

(The airport is in fact operational; the Qatar government flew top U.N. humanitarian official, Martin Griffiths, into Kabul at the weekend. Qatar’s foreign minister indicated alongside Secretary of State Antony Blinken in Doha on Tuesday that progress was being held up by as-yet unresolved talks with the Taliban about security arrangements.)

The terrorist group’s supreme leader (“emir and commander of the faithful”) Hibatullah Akhundzada, declared in a statement that the members of his “Islamic Emirate” government would “work hard towards upholding Islamic rules and shari’a in the country.”

“The Islamic Emirate will take serious and effective steps towards protecting human rights, the rights of minorities as well as the rights of the underprivileged groups within the framework of the demands of the sacred religion of Islam,” it said.

None of the 33 members of the government named on Tuesday are women, and almost all are ethnic Pashtuns (Abdul Salam Hanafi, one of two deputy prime ministers, is Uzbek and economy minister Din Mohammad is an ethnic Tajik.)

Most of the top echelon are under United Nations Security Council sanctions.

Over the weeks since the Sunni Islamists seized power in mid-August, the U.S., U.N. Security Council and numerous governments have stressed the need for an “inclusive” government to be set up in Kabul.

An August 30 U.N. Security Council resolution endorsed by all members – except Russia and China, which abstained – called for “an inclusive, negotiated political settlement, with the full, equal and meaningful participation of women.”

U.N. spokesman Farhan Haq said in response to a question about the Taliban cabinet Tuesday that it was for member-states, not the U.N. secretariat, to decide on recognition of governments, but reiterated that “only a negotiated and inclusive settlement will bring sustainable peace to Afghanistan.”

Haq also said it was up to the U.N. Security Council to add or remove names from its sanctions lists.

““We note the announced list of names consists exclusively of individuals who are members of the Taliban or their close associates and no women,” a State Department spokesperson said Tuesday. “We also are concerned by the affiliations and track records of some of the individuals.”

However, the spokesperson repeated the department’s position that the U.S. government “will judge the Taliban by its actions, not words.”

White House press secretary Jen Psaki told reporters earlier that the U.S. was in “no rush” to recognize a Taliban government, referring once again to the group’s behavior.

Four of the five Taliban terrorists freed from Guantanamo Bay by the Obama administration in a 2014 exchange for a captured U.S. soldier are in the new Taliban cabinet. They are, from left, Mohammed Fazl, Khairullah Khairkhah, Noorullah Noori, and Abdul Haq Wasiq. (Photos: U.S. Department of Defense)

The cabinet announced in Kabul on Tuesday includes four of the “Taliban Five” – terrorists at Guantanamo Bay released by the Obama administration in 2014 in exchange for U.S. Army Sgt. Bowe Bergdahl, who had been held by the Haqqani Network since 2009.

Two of them are accused of mass human rights abuses during the Taliban’s 1996-2001 regime:

“Acting” deputy defense minister Mohammed Fazl is accused of responsibility for the murder of large numbers of minority Hazara Shi’ites, including some 170 civilians summarily executed in January 2001 massacre in Takhar province. He was the Taliban’s deputy chief of staff at the time, according to his U.N. and E.U. sanctions listings.

“Acting” minister of borders and tribal affairs Noorullah Noori, who was the Taliban governor of Balkh province in the north, was accused by human rights advocates in 2001 “of involvement in the massacre of Afghans of Uzbek ethnic origin in the region” in the late 1990s.

The third member of the “Taliban Five” named to the new government is “acting” intelligence chief Abdul Haq Wasiq. In his previous role as deputy intelligence chief of the first Taliban regime, “he was in charge of handling relations with Al-Qaeda-related foreign fighters and their training camps in Afghanistan,” according to his U.N. sanctions listing. “He was also known for his repressive methods against Taliban opponents in the South of Afghanistan.”

The fourth member of the “Taliban Five” named to the new government is “acting” information and culture minister Khairullah Khairkhah, a former Taliban governor of Herat province and Taliban interior minister.