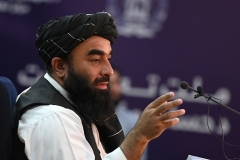 Taliban spokesman Zabihullah Mujahid tells a press conference in Kabul on Monday that the group has captured the Panjshir valley. (Photo by Wakil Kohsar/AFP via Getty Images)

(CNSNews.com) – The Taliban claimed Monday to have captured the holdout province of Panjshir and released footage of the “Islamic Emirate” flag being hoisted over the provincial governor’s office, but leaders of the anti-Taliban resistance said their campaign will continue, and called for a “national uprising.”

Fighting in the strategic valley about 90 miles north-east of Kabul had intensified over the weekend, with National Resistance Front of Afghanistan (NRF) figures charging that Pakistani drones and other assets were operating in support of the Taliban.

On Monday Taliban spokesman Zabihullah Mujahid in a statement claimed that Panjshir, “the last stronghold of the mercenary enemy,” had been conquered and was now “under the control of the Islamic Emirate.”

“A number of insurgent gang members were beaten, the rest fled, and the oppressed and dignified people of Panjshir escaped from their evil and hostage-taking,” added Mujahid – whose Islamist group is accused of effectively holding hostage U.S. citizens and Afghans wanting to leave the country after President Biden withdrew the last U.S. forces and ended a chaotic evacuation effort at Kabul airport.

Mujahid said that the conquest of Panjshir meant that the war was over, “and our people will have a peaceful and happy life in the atmosphere of freedom, independence and prosperity.”

But the NRF, led by resistance commander Ahmad Massoud and Amrullah Saleh – the vice president in the ousted Ashraf Ghani government who claims he is the legitimate interim president under the country’s constitution – is not admitting defeat.

“We, the people of Afghanistan, are used to fighting in defense of our dignity, our religion, our God and our Afghanistan,” Massoud said in a statement. “We have seen martyrdoms before and shall continue to do in our struggle.”

Massoud called on Afghans everywhere to rise up against the fundamentalist militia in whatever way possible, whether that meant taking up arms and joining the resistance or protesting Taliban rule as “our brave sisters in Kabul and Herat” have been doing. He also appealed to those who have joined the Taliban “with a good intention” to acknowledge their error and defect.

In comments directed at the international community, Massoud said Afghans “are today watchful of the moral calculation of the world and our neighbors, to see who stands in solidarity with the people of Afghanistan against the groups who serve foreign interests.”

“Yesterday’s attack revealed once again that foreign mercenaries supporting the Taliban have always existed, they did so in the past, and will continue to do in the future,” he said, alluding to the alleged involvement in the fighting of Pakistani, Arab, and other foreign fighters and jihadists allied to the Taliban.

The ISI helped to create the Taliban in the 1990s and its colluding with the group and allied terrorists over the decades since has been widely documented. Pakistan routinely denies the allegations.

(President Trump in 2018 withheld $300 million in military aid to Islamabad, with the Pentagon accusing it of providing safe haven to Taliban and Haqqani Network terrorists fighting in Afghanistan.)

Noting Hameed’s visit to Kabul to hold talks with Taliban representatives Ajit Kumar Singh, research fellow at the Institute for Conflict Management in New Delhi, said “the ISI, the fountainhead of terrorism in the region, has now secured a free hand to exploit Afghan territory to export terrorism to the outside world, while maintaining ‘credible deniability’ of its own involvement.”

Calls for Western governments to sanction Pakistan over its malign role in Afghanistan have grown in recent weeks.

“A UN founding member is attacked by a neighboring state whose invasion seeks to overthrow legitimate Afghan state institutions the whole world supported for 20 years under UN auspices,” tweeted Chris Alexander, a former Canadian ambassador to Afghanistan. “Yet no democracy has condemned this aggression. Shocking & disgraceful. #SanctionPakistan.”

Protestors rallying outside Pakistan’s embassy in Washington on Monday chanted slogans including, “Sanction Pakistan,” “Pakistan is terrorist,” and “Taliban is Pakistan.”

Anti-Taliban Politician Says He’s Now the Acting President of Afghanistan: ‘The War is Not Over’ (Aug. 18, 2021)