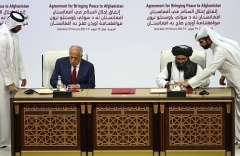 U.S. envoy for Afghanistan Zalmay Khalilzad and Abdul Ghani Baradar of the Taliban sign the agreement in Doha in February 2020. (Photo by Karim Jaafar/AFP via Getty Images)

(CNSNews.com) – Miffed at the negative reaction to the inclusion of a wanted terrorist in its “caretaker” cabinet, the Taliban on Thursday accused the U.S. of violating the agreement signed with the group early last year, by not removing Sirajuddin Haqqani and other Taliban leaders from U.S. and U.N. blacklists.

“In [the] Doha agreement all officials of the Islamic Emirate without any exception were part of interaction with the U.S. and should have been removed from the U.N. and U.S. blacklists, a demand which still remains valid,” the Taliban said in a statement released by spokesman Zabihullah Mujahid.

The terrorist group that seized power in Kabul in mid-August also repeated its stance that there was no difference between the Taliban and the Haqqani Network, which Sirajuddin Haqqani leads.

“The family of honorable Haqqani Sahib is part of Islamic Emirate and does not have a separate name or organizational setup,” it said.

(“Haqqani Sahib” refers to Jalaluddin Haqqani, the founder of the Haqqani Network, a close mentor of al-Qaeda leader Osama bin Laden, and Sirajuddin Haqqani’s father. Jalaluddin Haqqani, who was minister of tribal affairs in the Taliban’s 1996-2011 regime, died in 2018 of an unspecified illness.)

The Taliban said comments about Sirajuddin Haqqani remaining a wanted man constituted “a clear violation of the Doha agreement.”

“That America and other countries are making such provocative statements and trying to meddle the internal affairs of Afghanistan, the Islamic Emirate condemns it in the strongest terms.”

Both Sirajuddin and Khalil Haqqani are specially designated global terrorists, with U.S. government rewards of $10 million and $5 million, respectively, offered for information helping to bring them to justice.

The Haqqani Network, responsible for some of the deadliest attacks including suicide bombings against U.S. and coalition forces in Afghanistan, is a U.S.-designated foreign terrorist organization. The Taliban itself is not a designated FTO, despite experts’ assertions that drawing any distinction between the two is specious.

Biden administration officials have expressed dismay that the cabinet announced by Taliban is not “inclusive.”

Specific concerns about the inclusion of wanted terrorists have been addressed euphemistically, however, with Secretary of State Antony Blinken referring to people with “very challenging track records” and State Department spokesman Ned Price saying that “the track records, the backgrounds of some of the individuals involved, is a cause for concern.”

The Doha agreement signed between the Taliban and the Trump administration does include a commitment by the U.S. to review its sanctions and reward offers in relation to Taliban leaders, and to engage with the U.N. Security Council about lifting U.N. sanctions against them.

But both steps are linked to the start of intra-Afghan negotiations, which under the agreement were supposed to have started by March 10, 2020.  Delays caused by disputes over prisoner releases by the Taliban and elected Kabul government saw the talks only begin last September.

The discarded timeline was just one of several breaches of the deal.

The Taliban also undertook to make sure all released prisoners were “committed to the responsibilities mentioned in this agreement so that they will not pose a threat to the security of the United States and its allies.”

Yet as it swept towards Kabul, the Taliban emptied prisons of thousands of inmates, including al-Qaeda and ISIS-K terrorists.

Furthermore, the Taliban in the agreement committed to intra-Afghan talks that would include “a permanent and comprehensive ceasefire” and “agreement over the future political roadmap of Afghanistan” – pledges it has self-evidently broken.

It remains to be seen whether the Taliban will keep what was, for the U.S., the core of the Doha agreement – pledges that it would “not allow any of its members, other individuals or groups, including al-Qaeda, to use the soil of Afghanistan to threaten the security of the United States and its allies.”

A Security Council report just three months ago said Sirajuddin Haqqani himself was “assessed to be a member of the wider al Qaeda leadership.”

A recent U.N. Security Council report said Sirajuddin Haqqani was assessed to be a member of the wider al Qaeda leadership. (Screengrab: UNSC)

The same report said that al-Qaeda terrorists have characterized the agreement signed in Doha as a “reward for pursuing jihad,” and the group “stands to benefit from renewed credibility on the back of Taliban gains.”

In Kuwait on Thursday, Austin said the U.S. has “put the Taliban on notice” that it expects it will not allow al-Qaeda to “regenerate in Afghanistan.”

“One of the ways that the Taliban can demonstrate that they are serious about being a bona fide government and respected in an international community is to not allow that to happen,” he said. “So I think everybody’s watching this very closely.”