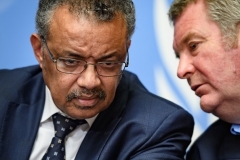 WHO Director-General Tedros Adhanom and head of the WHO emergencies program Michael Ryan. (Photo by Fabrice Coffrini/AFP via Getty Images)

(CNSNews.com) – World Health Organization Director-General Tedros Adhanom on Wednesday declined to discuss with reporters President Trump’s written ultimatum – reform or lose U.S. taxpayer dollars – beyond confirming that it had been received and was being examined.

But a senior WHO official at the same briefing warned that a loss of U.S. funding would have an impact on providing health services to the world’s “most vulnerable people.”

Asked by a reporter from the state-run China Daily whether he intended to respond to or ignore Trump’s letter, Tedros said only, “We have of course received the letter and we are looking into it.”

Asked by a British journalist what he plans to do about Trump’s warning that the WHO has 30 days to “commit to major substantive improvements” or lose U.S. funding, Tedros replied, again, “so the answer is, simply, we have received the letter, and we’re looking into it.”

In response to another question, Tedros spoke at some length about the way funding patterns have shifted over recent decades, before Michael Ryan, director of WHO’s emergencies program, stepped in, voicing concern about the implications of a loss of U.S. funding for that part of the organization’s work.

Much of the U.S. funding to that program, which he said amounted to $100 million a year, was directed to “humanitarian health operations all over the world, in all sorts of fragile and difficult settings.”

“Replacing those lifesaving funds for frontline health services to some of the most difficult places in the world, we’ll obviously have to work with other partners to ensure that those funds are – can still flow,” Ryan said.

“So this is going to be a major implication for delivering essential health services to some of the most vulnerable people in the world. And we trust that other donors will – if necessary – step in to fill that gap.”

The U.S. has been the WHO’s biggest donor by far since the organization was created in 1948.

For the 2018-19 biennium, U.S. funding totaled $893 million ($237 million in assessed contributions and $656 million in voluntary contributions), which amounted to almost 16 percent of WHO’s overall budget of $5.6 billion for the two-year period.

Tedros on Wednesday described the WHO budget as “very, very small,” equivalent to the annual budget of a medium-sized hospital in a developed country.

Unhappy with WHO’s response to the coronavirus pandemic – and especially its approach towards China, the origin of the outbreak – Trump last month suspended new funding pending a review.

Then in his letter to Tedros on Monday, he pledged to make that suspension permanent, and “reconsider our membership in the organization,” unless WHO committed, within 30 days, to making “major substantive improvements.”

“It is clear the repeated missteps by you and your organization in responding to the pandemic have been extremely costly for the world,” he said. “The only way forward for the World Health Organization is if it can actually demonstrate independence from China.”

Trump and a number of Republican lawmakers have been critical of his consistent praise for China’s handling of the outbreak, despite allegations that Beijing sought to cover up the crisis early on, and facilitated its spread.

“I understand that Dr. Tedros’ unusually close ties to Beijing started long before this current pandemic, and that’s deeply troubling,” Secretary of State Mike Pompeo told reporters at the State Department on Wednesday.

For months Tedros, a former Ethiopian foreign and health minister, has defended his praise for China’s response to the outbreak that began in Wuhan late last year, and shrugged off criticism.

“Much has been written and said about my praise for China,” he said at the Munich Security Conference in February. “I have given credit where it’s due, and I will continue to do that, as I would and I did for any country that fights an outbreak aggressively at its source to protect its own people and the people of the world, even at great cost to itself.”

The WHO’s World Health Assembly this week passed a resolution calling for an independent and comprehensive review into the coronavirus pandemic and WHO’s response.

Asked Wednesday when such an inquiry would begin, Tedros declined to say, other than that it would happen “at the earliest time pIossible.”

Rep. Michael McCaul (R-Texas), ranking member on the House Foreign Affairs Committee, said Tedros should resign ahead of the inquiry.