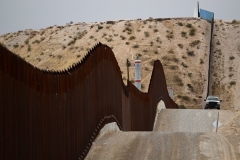 A U.S. Border Patrol vehicle in the El Paso sector of the U.S.-Mexico border, between New Mexico and Chihuahua state, earlier this month. (Photo by Patrick T. Fallon/AFP via Getty Images)

The CBP provides data on “encounters” with illegal migrants rather than the number of actual individuals apprehended, because it says many migrants make multiple attempts to cross the border and get into the United States.

While there were 173,620 encounters recorded in November, the number of “unique individuals encountered” was 127,653, it said. Twenty-five percent of the encounters involved individuals who had had at least one prior encounter with agents during the previous 12-month period.

Migrants from one of the three Northern Triangle countries, Guatemala, were next – 20,342 encounters in November, almost double those of November 2020.

Venezuela accounted for the next biggest contingent, with 20,341 encounters – a significant (10,954 percent) increase from the same month a year earlier, when just 184 apprehensions of Venezuelans were recorded.

From another of the Northern Triangle countries, Honduras, 19,841 encounters were reported, more than twice the number of those reported in November 2020.

Migrants from the third Northern Triangle country, El Salvador, made up 9,626 encounters in November, a more than twofold jump from the same month a year earlier.

For the limited number of other nationalities that are identified in the data released by CBP, those accounting for significantly higher number of encounters in November than the previous two Novembers include:

Upon taking office, President Biden suspended the Trump administration’s “Remain in Mexico” policy, under which unauthorized migrants were returned to Mexico to await the outcome of their immigration proceedings.

A Texas-based federal judge in August ordered its resumption.

In late October, Homeland Security Secretary Alejandro Mayorkas issued a revised version of the policy, officially known as the Migrant Protection Protocols (MPP), even while conceding that it “likely contributed to reduced migratory flows.”

“But it did so by imposing substantial and unjustifiable human costs on the individuals who were exposed to harm while waiting in Mexico,” Mayorkas contended at the time.

At a press briefing in Geneva on Friday, a spokesperson for the office of the U.N. high commissioner for human rights expressed concern about the resumption of the policy.

Ravina Shamdasani was answering questions relating to the deaths earlier this month of 54 U.S.-bound migrants, mostly from Central America, killed when the truck they were traveling in overturned in southern Mexico.

“We are concerned about the re-implementation of the Migrant Protection Protocol and the risk that it poses on the already stretched humanitarian capacity of Mexico to receive migrants,” she said.

“We are concerned that any kind of heightened security procedures to deal with migration will only drive migrants further into unsafe routes, and we are afraid that we’ll be seeing more resort to the dangerous routes and to smuggling networks.”

Shamdasani said the U.N. human rights office called on the U.S. and Mexican authorities to “prevent further deaths, through an increased effort to tackle the underlying causes of irregular migration, such as violence, insecurity, poverty, social exclusion, and climate change, which are compelling migrants to leave their countries of origin in the first place.”