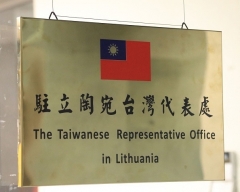 The Taiwanese Representative Office in Lithuania opened in Vilnius on Thursday. (Photo by Petras Malukas/AFP via Getty Images)

(CNSNews.com) – Chinese state media unleashed vitriol on Lithuania on Sunday, characterizing the small eastern European country as an insignificant insect to be squashed for daring to challenge Beijing’s rigid stance on Taiwan.

China’s foreign ministry announced that it was downgrading diplomatic relations with Lithuania to the level of charge d’affaires, rather than send back its ambassador who was recalled when the row first erupted over the summer.

The dispute centers on the Baltic nation’s decision to allow Taiwan to open a “Taiwanese Representative Office” in Vilnius.

China views the fact that the office goes under the name of “Taiwan” as according undue diplomatic recognition to the island democracy, which it claims as a rebellious province.

“This act openly creates the false impression of one China, one Taiwan in the world, renounces the political commitment made by Lithuania in the communique on the establishment of diplomatic relations with the People’s Republic of China (PRC), undermines China’s sovereignty and territorial integrity, and grossly interferes in China’s internal affairs,” the ministry said on Sunday.

Taiwan has offices in more than 50 countries around the world, but operating under such names as “Taipei Economic and Cultural Office,” to allay Beijing’s concerns that any form of sovereignty is being implied.

When Lithuania’s plans were first announced in August, China retaliated by recalling its ambassador from Vilnius and demand that Lithuania withdraw its envoy from Beijing.

But Lithuania did not back down, and the Taiwanese Representative Office opened on Thursday to the “delight” of Taiwanese President Tsai Ing-wen, prompting Chinese foreign ministry spokesman Zhao Lijian to warn that Lithuania “shall reap what it sows.”

Two days later came the foreign ministry announcement that the Chinese ambassador would now not return and relations would be relegated to charge d’affaires level.

“We urge the Lithuanian side to immediately put right its mistake and not to underestimate the Chinese people’s strong resolve, will and capability to defend national sovereignty and territorial integrity,” it said in a statement. “We also have this stern warning for the Taiwan authorities: Taiwan is never a country.”

“Lithuania reaffirms its adherence to the ‘One China’ policy, but at the same time has the right to expand cooperation with Taiwan and to receive and establish non-diplomatic representations for ensuring the practical development of such ties, the way many other countries do,” it said.

Taiwan’s foreign ministry called China’s response petty and ludicrous, and the government’s Mainland Affairs Council, which handles issues relating to China, said Beijing had no right to comment on a matter between Taiwan and Lithuania.

As a sovereign country, Taiwan has the right to engage in bilateral cooperation with other countries, it said, employing language that China hotly rejects.

On Friday, Lithuanian Foreign Minister Gabrielius Landsbergis met with U.S. Undersecretary of State for Civilian Security, Democracy, and Human Rights Uzra Zeya, who was visiting to take part in an international forum hosted by his ministry on the “future of democracy.”

“We reject attempts of other countries to interfere in Lithuania’s sovereign decision to deepen cooperation with Taiwan,” Zeya told a news conference, reaffirming U.S. “support for our valued NATO and E.U. partner and ally.”

Landsbergis is scheduled to visit Washington this week, for talks focused on bilateral trade and diversification of supply chains, as well as strategic dialogue on Indo-Pacific issues – a topic that will inevitably touch on China and Taiwan.

In their reaction to Lithuania’s stance, some Chinese state media outlets seemed incensed that what they view as a small and insignificant country has the temerity to challenge a country as important and powerful as China.

Slightly smaller than West Virginia, Lithuania is 147 times smaller than China, and its population of some 2.7 million could fit into China’s more than 515 times.

Xinhua news agency in a commentary called the Lithuanian decision “treacherous” and said it would “pay a heavy price for its recklessness,” as it had “gone its own way in defiance of the will of the 1.4 billion Chinese people.”

A China Daily opinion writer called Lithuania “a pawn of the anti-China political camp,”  and advised it to “correct its wrongs.”

Global Times dismissed Lithuania as “trivial” and an “impertinent country that undermines the morality and rules between countries.”

“Lithuania is a small country. Is it even qualified to spoil the situation and stir up trouble with China?” the Chinese Communist Party paper asked. “The country’s population is not even as large as that of Chaoyang district in Beijing. It is just a mouse, or even a flea, under the feet of a fighting elephant.”

The paper quoted Wang Yiwei, director of the institute of international affairs at Beijing’s Renmin University, as calling Lithuania a “tiny state” that was “ridiculous in being a running dog for anti-China forces.”

In a separate editorial, Global Times denigrated Lithuania as “a clown that plays bravado and loyalty,” and “a small European country” that “dares to show off its teeth with the protection of the U.S. and the E.U.”

It said Beijing “should make Lithuania feel the pain and display our dignity as a major power,” but at the same time should not jeopardize its own interests.

“It is like we are swatting a fly – we just need to be careful not to stain our hands or walls and not break the vase on the table.”