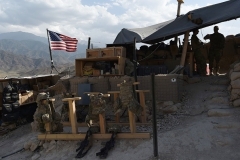 US soldiers at a checkpoint in Nangarhar province, Afghanistan. (Photo by Wakil Kohsar/AFP via Getty Images)

(CNSNews.com) – The U.S. will “probably” have fewer than 5,000 U.S. troops in Afghanistan by the time of the U.S. election, President Trump said in an interview aired Monday – the same day as Secretary of State Mike Pompeo reportedly held a virtual meeting with a senior Taliban official.

“Probably anywhere from four to five thousand,” Trump told Axios’ Jonathan Swan, when asked how many troops would still be in Afghanistan on Election Day.

Administration officials cited anonymously in media reports over the summer said Trump wanted to see all of the troops out of Afghanistan by the election, but that military commanders had urged him to reconsider.

Under an agreement signed with the Taliban in February, the U.S. pledged to reduce the number of troops in Afghanistan from the 12,000-13,000 personnel then stationed there to 8,600 by mid-July.

That number would then be reduced to zero by the end of next April, but on condition that the Taliban met its commitments contained in the agreement.

They include entering into “intra-Afghan” negotiations with the government, releasing prisoners, and the severing the links with its longstanding terrorist ally, al-Qaeda.

The Pentagon confirmed last month that the interim target of dropping to 8,600 personnel had been reached.

There have been setbacks in both the intra-Afghan talks and prisoner release issues, however, and the top U.S. commander in the region expressed doubts in June about the Taliban’s willingness to cut ties with al-Qaeda.

In the interview, taped on July 28 and aired on HBO on Monday, Trump and Swan sparred over the number of troops in Afghanistan now compared to when the president took office – roughly the same.

Trump said that further reductions were “already planned.” The level would be at 8,000 “in a very short period of time,” he said, and “then we’re going to be down to 4,000 – we’re negotiating right now.”

Swan asked the president when the 4,000 number would be reached.

Trump replied, “very soon,” but when pressed, said he did not want to say exactly when.

“We will get largely out—” Trump started to say.

Swan interrupted: “On Election Day, how many American troops will be in Afghanistan?”

Virtual talks with the Taliban 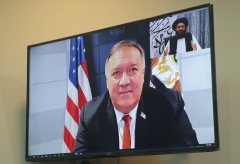 On Monday, the Taliban announced that Pompeo had held a video conference with a Taliban delegation led by senior negotiator Abdul Ghani Baradar.

“The Secretary of State also welcomed announcement of ceasefire by the Islamic Emirate on the eve of the current Eid,” he added.

“Islamic Emirate” is the name the terrorist group has used for itself since it seized control of most of Afghanistan in the 1990s, providing a haven for al-Qaeda. U.S. forces invaded and toppled the regime after al-Qaeda attacked America on 9/11.

Shaheen posted a photograph purportedly showing the virtual interaction between Pompeo and Baradar. The State Department has yet to comment, although Pompeo will field reporters’ questions at the department on Wednesday.

Baradar, who is based in Doha, is the Taliban official who signed the agreement with the U.S. in February and spoke by phone to Trump the following month.

Under the agreement, intra-Afghan negotiations were envisaged to begin by March 10, which was also the target date for prescribed prisoner releases. Neither materialized.

The Taliban has freed around 1,000 Afghan detainees, and the government has released around 4,600 Taliban prisoners. But it balked at freeing the remaining 400, on the grounds they were involved in serious crimes including murder and drug trafficking.

President Ashraf Ghani is planning to hold a traditional assembly of tribal leaders (a “loya jirga”) later this month to consult on the matter.

In the meantime, he offered to free 500 other Taliban prisoners – not on the list of 400 – and on Sunday his national security council announced that the total number freed has now reached 4,917. It added that releases “will continue until the total reaches 5,100.”

In a statement this week the Taliban complained that calling a loya jirga was inappropriate, saying Ghani was using as a “tool” a gathering that had traditionally only been called on rare occasions, “to address some of the biggest and most fundamental issues in Afghanistan’s history.”

“There are various excuses for delaying the inter-Afghan talks, but their sole purpose is to pave the way for an extension of the occupation and crisis,” it charged.