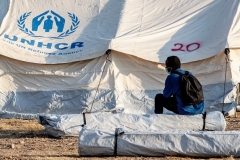 A U.N.-administered refugee camp on the Greek island of Lesbos. (Photo by Niels Wenstedt/BSR Agency/Getty Images)

(CNSNews.com) – Fiscal year 2020 ended overnight with the smallest number of refugees resettled in the United States in more than 40 years, and the Trump administration setting a cap on 15,000 refugee admissions for fiscal year 2021.

According to State Department Refugee Processing Center data, just 11,814 refugees were admitted to the U.S. in FY 2020, 65 percent of the 18,000 admission ceiling announced by the administration last fall.

The Immigration and Nationality Act (INA) requires the president to submit a report to the House and Senate Judiciary committees, before the start of each fiscal year, on the “foreseeable number of refugees” needing resettlement in the year ahead. The report should be submitted to the committees, “to the extent possible,” at least two weeks before “appropriate consultation” involving designated cabinet-level representatives.

For the last three years the administration has narrowly met the deadline for issuing the report to Congress – Sept. 26 in 2019, Sept. 17 in 2018, and Sept. 27 in 2017 – although not for carrying out what lawmakers consider to be an appropriate process of consultation. This year, the State Department says it submitted the report late on Wednesday.

Earlier in the day, House Judiciary Committee chairman Jerrold Nadler (D-N.Y.) and the chairwoman of the committee’s immigration and citizenship subcommittee, Rep. Zoe Lofgren (D-Calif.) accused the administration of violating immigration laws by neither having scheduled a consultation nor setting a refugee admission ceiling by the start of the new fiscal year.

“For more than a decade, Republican and Democratic administrations have recognized the importance of the refugee admissions program, consistently holding a consultation and finalizing the refugee determination prior to the end of the fiscal year,” they said in a statement.

(That claim does not line up with an assertion in 2018, by then-Senate Judiciary Committee chairman Chuck Grassley (R-Iowa) and ranking member Sen. Dianne Feinstein (D-Calif.), to the effect that administrations of both parties have been deficient in meeting the INA requirement.

“Unfortunately, over the last decade the annual consultation process and the periodic updates required by law have increasingly become both pro-forma and effectively meaningless,” they wrote in a letter to the administration. “To be clear – and fair – this is not a new problem unique to the Trump Administration. The Executive Branch has failed to engage in a meaningful and appropriate consultation with Congressional leaders for decades, suggesting this problem is a systemic one.”)

During a visit to Rome on Wednesday, Secretary of State Mike Pompeo pushed back at a reporter’s question on about whether the U.S. was doing enough to ease the global refugee crisis.

“There’s no more generous nation anywhere in the world when it comes to alleviating human crises around the world,” he said. “So you suggest somehow that we didn’t do our fair share when it comes to refugees, nothing could be further from the truth.”

“We’ve taken more refugees inside the United States than any other nation over the course of the last 20 years,” Pompeo continued. “We continue to be the single greatest contributor to the relief of humanitarian crisis all around the world. We will continue to do so, certainly so long as President Trump is in office.”

According to a State Department report to Congress earlier this year, the U.S. in FY 2019 “contributed nearly $9.3 billion to supporting crisis responses globally, the largest contribution of any country in the world.”

Refugee resettlement agencies and others are calling for a significant increase in the refugee admission ceiling for FY 2021.

The Lutheran Immigration and Refugee Service, described as the nation’s “largest faith-based organization exclusively dedicated to serving immigrants,” called on Trump to resettle at least 95,000 refugees during the coming year.

The U.S. Commission on International Religious Freedom, an independent statutory body that advises the executive and legislative branches, has also called for 95,000 admissions, while stressing the importance of helping survivors of religious persecution.

“Enabling refugees to safely and voluntarily return home should stay a top priority,” said USCIRF vice chair Tony Perkins, a Republican appointee. “However, resettlement to the United States through an appropriate process that ensures America’s safety and security must continue to be available for those refugees who remain in life-threatening danger and unable to go back to their countries of origin, including religious minorities.”

Democratic presidential nominee Joe Biden has pledged, if elected, to increase the refugee cap to 125,000 a year, with the aim of raising it further over time.