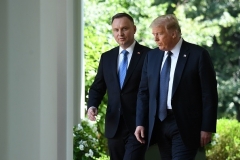 President Trump and Polish President Andrzej Duda at the White House on Wednesday. (Photo by Saul Loeb/AFP via Getty Images)

(CNSNews.com) – President Trump on Wednesday confirmed that his plan to halve the number of U.S. troops in Germany is linked to an agreement reached with his Polish counterpart last year to send additional troops to Poland.

Speaking at the White House Rose Garden alongside Polish President Andrzej Duda, Trump pointed out that Poland was one of just nine members of the 30-strong NATO alliance to be meeting its “monetary obligations” – a reference to an agreement by all allies to dedicate at least two percent of national GDP to defense spending.

“Poland is one of the few countries that are fulfilling their obligations under NATO, in particular their monetary obligations,” he said. “And they asked us if we would send some additional troops.”

Trump said Poland would itself cover the costs of the deployment, “and we’ll probably be moving them from Germany to Poland.”

“We’re going to be reducing Germany very substantially,” he added, repeating a recent announcement that he plans to reduce troop numbers there by half – or to 25,000.  (The cap is 52,000 although there are now roughly 34,500 U.S. troops stationed in Germany.)

Trump said some of the troops leaving Germany would return to the U.S., and others would be deployed elsewhere, in Europe. He did not provide a breakdown or further details.

During a visit to Washington last fall, Duda signed a defense agreement with Trump providing for “approximately 1,000” more U.S. troops to be stationed in Poland – in addition to a rotational pool of 4,500 troops already there.

Unlike Germany, Poland shares a border with Russia. In response to a question about what message moving troops to Poland would send to Moscow, Trump said, “I think it sends a very strong signal to Russia.”

But, he continued – repeating an argument he has been making for two years – an even stronger signal to Russia was the fact Germany was paying the Russians billions of dollars for natural gas flowing by pipeline, while at the same time expecting the U.S. to help defend Germany from Russian aggression.

“And I'm saying, what's that all about?” Trump asked. “You're spending billions of dollars to Russia, then we're supposed to defend you from Russia? So I think it's a very bad--I think the people of Germany are very unhappy about it.”

Poland, on the other hand, “has been very, very terrific,” Trump said. “In fact, I don't believe Poland is actually accepting any of the energy from the pipeline from Russia. So that sends a signal right there. With all of that being said, we expect to get along with Russia. We expect to get along with everybody. But Germany has--they really owe a lot of money in NATO. And this has been going on for many years.”

Asked the same question about what message the troop deployment would send to Russia, Duda responded at some length, painting Russia as a hostile player with revived “imperial ambitions,” pointing to its invasion of Georgia in 2008 and its aggression against Ukraine since 2014.

Given those actions, he said through an interpreter, the presence of NATO and U.S. troops on NATO’s eastern flank including Poland “demonstrates that Article 5 of the North Atlantic Treaty [which states that that an attack on any member is considered an attack on all] is treated seriously, and it shows that if anyone wanted to attack Poland, it won’t be a soft landing for that entity, that it won’t pay off for such an aggressor.”

Duda also said that while he would not dare tell the U.S. president where he should send U.S. troops, he had nonetheless urged him not to withdraw forces from Europe at large, where they have provided “a huge security guarantee” since the end of World War II.

Trump, again, criticized Germany for not meeting the two percent defense spending target, saying that depending on how it’s calculated, it was spending a little over one percent of GDP on defense.

NATO figures provided at the end of last year put Germany’s defense spending at 1.38 percent. Although the target date for all allies to reach two percent is only 2024, many are far from being on track to achieve that, with Germany recently indicating it may only reach two percent by 2031.

Of the 30 allies, only nine are now spending at least two percent of GDP on defense. They are, in order of spending, the United States, Bulgaria, Greece, Britain, Estonia, Romania, Lithuania, Latvia, and Poland.

“We will be only satisfied when all members are paying their fair share,” Trump said.

Duda was the first foreign leader to visit the White House since the coronavirus pandemic disrupted normal intergovernmental business and international travel.

In a Pew poll early this year, Polish respondents were more supportive of Trump than those in any other country among those polled in the European Union, with 51 percent saying they had confidence in him “to do the right thing regarding world affairs.”

None of the other 12 E.U. member states included in the survey gave Trump higher than 34 percent (Slovakia), and Germany was at the bottom end of the scale, with only 13 percent.

In the same poll, Poles once again accounted for the most favorable opinion of the United States, at 79 percent, while Germany again gave the lowest rating, at 39 percent.