Trump Starts One-Year Clock for WHO Exit; Biden Vows to Rejoin ‘On My First Day as President’ 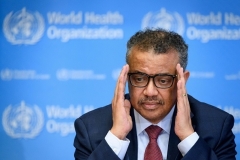 (CNSNews.com) – The White House has given the United Nations its formal notice of withdrawal from the World Health Organization, prompting Democratic presidential candidate Joe Biden to declare Tuesday that, should he become president, he will rejoin the WHO on his first day in office.

“Americans are safer when America is engaged in strengthening global health. On my first day as President, I will rejoin the WHO and restore our leadership on the world stage,” the former vice president tweeted.

A spokesman for U.N. Secretary-General Antonio Guterres confirmed that the secretariat had received formal notification of U.S. withdrawal on Monday.

Spokesman Stephane Dujarric said the actual withdrawal would be effective in one year – July 6, 2021.

Dujarric recalled that when the U.S. joined WHO in 1948, it did so setting certain conditions for possible future withdrawal, including “giving a one-year notice and fully meeting the payment of assessed financial obligations.”

Guterres was now “in the process of verifying with the World Health Organization whether all the conditions for such withdrawal are met.”

The U.S. is WHO’s biggest funder, accounting for more than $400 million a year, or about 15 percent of the budget. U.S. contributions have has been suspended since April, so Dujarric’s comment indicates that the U.N. will expect further funds before the final departure.

As of the end of June, the U.S. accounts for around $99 million in outstanding contributions, according to WHO.

President Trump suspended funding in mid-April, pending a review into WHO’s handling of the coronavirus outbreak that emerged in Wuhan, China, late last year. On May 18 he sent a letter to WHO Director-General Tedros Adhanom, giving the agency 30 days to make reforms, or risk losing U.S. funding permanently.

Then just 11 days later, the president announced at the White House that the U.S. would be leaving WHO and redirecting funding “to other worldwide and deserving urgent, global public health needs.”

He accused WHO of being controlled by China – which he noted accounts for less than one-tenth of the U.S. funding contribution – and of refusing to agree to make reforms.

In the same statement Trump repeated allegations that China had tried to cover up the COVID-19 outbreak early on, and ignored its obligations to notify WHO when the virus first emerged.

Tedros frequently and enthusiastically praised Beijing’s handling of the outbreak, but WHO officials have repeatedly denied claims of inappropriate treatment of China.

‘An important action in accountability’

WHO did not respond immediately to the latest development, although top officials earlier expressed concern about the implications of a loss of U.S. funding to its ability to provide health services to the world’s “most vulnerable people.”

Sen. Rick Scott (R-Fla.), who has been calling for WHO accountability for months, thanked Trump for the decision.

“The message is clear: the US won’t spend taxpayer $$ on an organization that supported Communist China’s cover-up of the Coronavirus and doesn’t have Americans’ best interest in mind,” he tweeted. “Enough is enough.”

“If an organization is going to cover up and lie about another country’s cover ups and lies, why should we be party to such corruption?” asked Rep. Rick Crawford (R-Ark.). “Withdrawing from the WHO is an important action in accountability for our country and for all countries who’ve suffered due to COVID.”

But another Republican, Senate health committee chairman Lamar Alexander of Tennessee, disagreed with the move.

“Certainly there needs to be a good, hard look at mistakes the World Health Organization might have made in connection with coronavirus, but the time to do that is after the crisis has been dealt with, not in the middle of it,” he said.

“Withdrawing U.S. membership could, among other things, interfere with clinical trials that are essential to the development of vaccines, which citizens of the United States as well as others in the world need.”

Alexander said if the administration has specific recommended reforms for WHO, it should submit them to Congress, so that “we can work together to make those happen.”

“WHO is the only body capable of leading and coordinating the global response to COVID-19,” she said. “Terminating the U.S. relationship would undermine the global effort to beat this virus – putting all of us at risk.”

A House Appropriations subcommittee this week marked up a fiscal year 2021 State and Foreign Operations spending bill that restores funding to WHO, including a requirement that the administration distribute at least $200 million to the agency within 60 days of the legislation’s enactment.

Republicans on the panel have already declared the bill dead on arrival as it currently stands, citing provisions such as one seeking to permanently repeal the Mexico City Policy, a Reagan-era policy prohibiting federal funding for organizations promoting or performing abortions abroad.