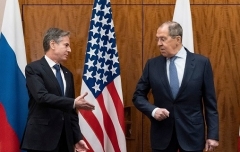 (CNSNews.com) – In its written response to Russia’s demands for security guarantees in Europe, the Biden administration addressed an issue that Moscow has been raising repeatedly amid the current tensions – the notion that one country should not strengthen its security in a way that compromises the security of another.

It said the so-called “indivisibility of security” principle that Russia is emphasizing “cannot be seen in isolation” from other mutual commitments, including the post-Cold War understanding that countries should be free to choose their own security arrangements and alliances.

The formal U.S. and NATO responses to Russia’s demands that were handed over a week ago were not made public, but a copy was leaked to the Spanish daily El Pais.

State Department spokesman Ned Price on Wednesday effectively confirmed its authenticity, saying he had “seen nothing to suggest these documents are not authentic.”

Russian officials have said repeatedly that the West’s insistence on keeping NATO’s door open to potential future members flies in the face of past pledges on the “indivisibility of security.”

In a pair of draft papers released in December, Russia demanded that NATO not expand any further eastward – with a particular reference to Ukraine – or deploy weaponry and hold exercises near Russia’s borders.

The U.S. and NATO insist that NATO’s “open door” policy will remain in place, based on the tenet that countries are free to choose which alliances they make or associate with.

Moscow argues that that principle does not stand alone, however, and points to two arcane Organization for Security and Co-operation in Europe (OSCE) documents, signed in Istanbul, Turkey in 1999 and Astana, Kazakhstan in 2010.

The OSCE is a grouping of 57 “participating states” – all in Europe and Eurasia bar the U.S. and Canada, and bringing together countries that were in both the Western and Soviet blocs during the Cold War.

The “Istanbul” and “Astana” declarations both state, “We reaffirm the inherent right of each and every participating State to be free to choose or change its security arrangements, including treaties of alliance, as they evolve.”

They also go on to say, in the same paragraph, “Each participating State will respect the rights of all others in these regards. They will not strengthen their security at the expense of the security of other States.”

The national flags of the formerly communist countries that joined NATO in 2004 flank the alliance’s banners. From left, they are the flags of Bulgaria, Estonia, Latvia, Lithuania, Romania, Slovakia and Slovenia. (Photo by Yves Boucau/AFP via Getty Images)

The Kremlin argues that the West is upholding the first principle but ignoring the second; that allowing countries close to its borders to join NATO is compromising Russia’s security interests.

Addressing lawmakers in the State Duma last week, Foreign Minister Sergei Lavrov said he had those documents in his hands when he met with Secretary of State Antony Blinken in Geneva on January 21.

The West interprets the first principle to entail the right to join NATO, but “the second point, where it says that no one has any right to strengthen their security at the expense of others, how do they explain in practice?” Lavrov asked. “Gross silence.”

“The very essence of the [OSCE] agreements on indivisible security is that either there is security for all or there is no security for anyone,” Lavrov wrote in a letter sent this week to Western foreign ministries.

In its written response to the Russia’s security demands, the administration said that the U.S. was “prepared for a discussion [with Russia] on the indivisibility of security – and our respective interpretations of that concept.”

But, it continued, the principle should be seen “in the rich context of the many commitments OSCE participating states have made to each other and cannot be seen in isolation.”

In its written response to Moscow, also leaked to El Pais, NATO says that it is “a defensive alliance and poses no threat to Russia.”

The “Istanbul” and “Astana” declarations also affirm that no OSCE state “can consider any part of the OSCE area as its sphere of influence.”

In a speech in Berlin last month, Secretary of State Antony Blinken said that principles of international peace and security established in the wake of the World Wars and the Cold War reject the right of any country “to exert a sphere of influence that would subjugate sovereign neighbors to its will.”

Russia accuses the West of double standards on the issue.

“Just like the United States and other countries, Russia has its own legitimate interests, including in the sphere of security,” a Russian foreign ministry official said at a briefing last month.

Citing examples including France’s concerns about Russian involvement in former French colonies in Africa, the official said it was “the collective West rather than Russia that is dividing the world into spheres of influence and backyards.”

“After the Soviet Union left the historical stage, U.S. leaders started building a new international order, that is, spreading U.S. spheres of influence throughout the world.”

In and after 1999 all of the Moscow’s one-time Warsaw Pact allies joined NATO, as did three former Soviet constituent republics, Latvia, Lithuania, and Estonia, in 2004.

Long before he became president, President Biden argued against the notion of “spheres of influence,” with specific reference to Russia and Europe, raising the issue during speeches at the Munich Security Conference in 2009 and again in 2015.

Also in 2015, Biden said at the Brookings Institution that the U.S. “will not recognize any sphere of influence.”

The remark prompted a discussion at that day’s State Department briefing about whether that included, for example, U.S. interests in the Western Hemisphere, or China’s relations with countries in Southeast Asia.

Spokesman Jeff Rathke said it was not appropriate to use the term “sphere of interest” in relation to cases “where we desire to improve our contacts with countries, either where we have existing alliances or where we want to build stronger ties.”