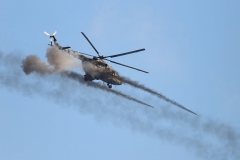 A helicopter fires during Russia-Belarus joint military exercises in western Belarus on Saturday. (Photo by Leonid Shcheglov/Belta/AFP via Getty Images)

(Update:  After President Biden spoke with President Vladimir Putin by phone on Saturday, the White House said he “was clear that, if Russia undertakes a further invasion of Ukraine, the United States together with our allies and partners will respond decisively and impose swift and severe costs on Russia.”

Biden had also “reiterated that a further Russian invasion of Ukraine would produce widespread human suffering and diminish Russia’s standing” and was clear with Putin “that while the United States remains prepared to engage in diplomacy, in full coordination with our allies and partners, we are equally prepared for other scenarios.”)

(CNSNews.com) – With the U.S. and other countries withdrawing embassy staff from Kyiv amid fears a war could erupt at any time, Secretary of State Antony Blinken warned his Russian counterpart Saturday that an invasion of Ukraine “would result in a resolute, massive, and united transatlantic response.”

Blinken, who is traveling in the Asia-Pacific, discussed with Foreign Minister Sergei Lavrov “acute and shared concerns that Russia may be considering launching further military aggression against Ukraine in the coming days,” according to State Department spokesman Ned Price.

“The secretary made clear that a diplomatic path to resolving the crisis remained open, but it would require Moscow to de-escalate and engage in good-faith discussions.”

President Biden planned to speak by phone to Russian President Vladimir Putin later Saturday, as the administration warns that the Kremlin now has the military assets in place around Ukraine to mount an invasion with little notice.

“We are in the window when a Russian invasion could start at any time if President Putin so decides,” Blinken said in Fiji on Saturday. “That includes in the coming days. We don’t know whether President Putin has made that decision, but we do know that he has put in place the capacity to act on very short notice.”

“This is a pivotal moment,” Blinken said. “We are prepared for whatever should happen.”

In another call early Saturday, Defense Secretary Gen. Lloyd Austin spoke to his Russian counterpart Sergei Shoigu about “Russia’s force build-up in Crimea and around Ukraine.” A Pentagon readout provided no further details.

Russia, which annexed the Crimean peninsula in 2014 and has since then been supporting armed separatists in eastern Ukraine’s Donbass region, in recent months has amassed more than 100,000 troops near Ukraine’s borders.

This week Russian forces kicked off joint wargames in Ukraine’s northern neighbor Belarus, which U.S. officials fear could be a prelude for a fresh invasion. It also announced imminent live-fire naval exercises in the Black Sea, drawing a protest from Kyiv over the affect they will have on navigation and Ukrainian ports.

Moscow’s readout of the Blinken-Lavrov call said Lavrov had accused the U.S. and its allies of launching a “propaganda campaign” about alleged Russian aggression, with “provocative goals.”

He said the campaign served to encourage harmful attempts by Ukraine’s government to resolve the conflict in the Donbass by force.

(Lavrov’s ministry said it was removing some of its diplomats from Ukraine too, citing “possible provocations by Kyiv or third countries.”)

Lavrov also complained to Blinken that recently-received responses from the U.S. and NATO to Russia’s demands for security guarantees had “ignored” its two top priorities – an end to NATO expansion, and an end to the deployment of weaponry near Russia’s borders.

The U.S. Embassy in Kyiv said Saturday the State Department had ordered most U.S. employees at the mission to leave due to “continued reports of a Russian military build-up on the border with Ukraine, indicating potential for significant military action.”

From Sunday, consular services at the embassy would be suspended, although a small consular team would remain in the western city of Lviv, near the border with Poland, “to handle emergencies.”

In an updated travel advisory, the department urged U.S. citizens not to travel to Ukraine and those in the country to leave immediately, using commercial or other privately available transportation options.

Repeating warnings delivered on Friday by National Security Advisor Jake Sullivan, the department reiterated that the U.S. government would not be able to evacuate citizens in the event of Russian military action anywhere in Ukraine.

Britain also announced a withdrawal of some diplomatic staff in Ukraine “due to the growing threat from Russia,” and joined a number of countries, including Japan and South Korea, in advising their citizens to leave.

Pentagon press secretary John Kirby said on Saturday that Austin had ordered the “temporary repositioning” of Florida National Guard troops from Ukraine, saying the decision was taken out of an abundance of caution, with the “safety and security of our personnel his paramount concern.”

“We remain committed to our relationship with the Ukrainian armed forces,” Kirby added.

More than 150 members of the Florida National Guard’s 53rd Infantry Brigade Combat Team have been stationed near Lviv in western Ukraine since November, training and advising Ukrainian troops.

On Friday, the Pentagon said that another 3,000 U.S. troops were being sent to Poland, beyond the 1,700 whose deployment was announced previously. The U.S. is also sending 1,000 military personnel from Germany to Romania. NATO allies Poland and Romania both border Ukraine.

Biden has stressed that U.S. forces are being sent to Europe to bolster and reassure NATO allies covered by the alliance’s article five mutual defense provisions – not to fight in Ukraine.