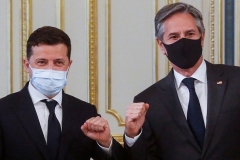 (CNSNews.com) – In a phone conversation with Ukrainian President Volodymyr Zelensky on Monday, President Biden highlighted the importance of putting Ukraine on the formal path to NATO membership, according to a readout from Zelensky’s office.

A statement attributed to Zelensky advisor Andriy Yermak said that Biden during the call had “highlighted the full support for Ukraine’s Euro-Atlantic integration and the importance of providing the Ukrainian state with a NATO membership action plan.”

“He assured that Ukraine’s position will be taken into account when discussing strategic issues in NATO, as well as during scheduled top-level events,” he added, an apparent reference to Biden’s upcoming participation in G7, NATO, and European Union summits, as well as his planned meeting in Geneva next week with Russian President Vladimir Putin.

A White House readout on the call was a little vaguer, but did refer to U.S. support for Zelensky’s reform agenda “based on our shared democratic values and Ukraine’s Euro-Atlantic aspirations.”

National Security Advisor Jake Sullivan said at a briefing Biden told Zelensky “that he will stand up firmly for Ukraine’s sovereignty, territorial integrity, and its aspirations, as we go forward.”

But when asked about the NATO membership question, Sullivan declined to get into “specifics.”

While they spoke about U.S. support for Ukraine’s security, he said, “in terms of the specifics of what they discussed, I’m going to let the two of them speak for themselves. I’m not going to read out that aspect of the meeting.”

The White House confirmed that Biden has invited Ukraine’s president to visit later this summer. It will be the first trip to the U.S. by Zelensky since the former actor and comedian won the presidency by a landslide in 2019.

Seven years after Putin annexed Ukraine’s Crimea peninsula, and amid ongoing Kremlin support for separatists in the east of his country, Zelensky has been putting increasing emphasis this year on the need for the alliance to grant Ukraine a long-delayed “membership action plan” (MAP).

Doing so, he says, would send a clear signal that Moscow’s opposition to the further eastward expansion of NATO into its former “sphere of influence” no longer constitutes a dealbreaker.

In an interview with Axios published on Sunday, Zelensky called for the issue to be “resolved immediately.”

He noted that Ukraine has been “waiting and hearing promises about NATO for 13 years already.”

Determination to thwart the hopes of both Ukraine and Georgia to join the alliance has been a central factor in Russian policy towards the former Soviet republics, including its military interventions in Georgia in 2008 and Ukraine in 2014.

At a NATO summit in Bucharest 2008, the George W. Bush administration pushed for immediate MAPs for Ukraine and Georgia but the alliance, which operates on consensus, was unable to reach agreement.

Opposition was led by Germany and France, widely seen as arising from their reluctance to antagonize the Russians, on whom they relied heavily for energy supplies.

(Russia’s inclination to use its position as a crucial energy supplier to Europe as a lever in political disputes is one of the main reasons for opposition among U.S. and European lawmakers to the Nord Stream 2 gas pipeline project.)

At the Bucharest summit, the German-led group also pointed to unresolved territorial disputes in Georgia and relatively low levels of public backing for NATO membership in Ukraine. Russia’s actions in both countries have contributed significantly towards those problems.

In the end, the summit declared that Ukraine and Georgia “will become members” at some future, unspecified date. That formula has been repeated at every NATO summit held since then, but the “Russian veto” continues to hold.

In the meantime, the two aspirants were advised to implement comprehensive defense and other reforms in preparations for eventual membership.

‘We don’t have consensus’

A week before the 2021 NATO summit in Brussels, Deputy Secretary General Mircea Geoana told a Ukraine democracy and anti-corruption forum on Monday that while the alliance supports Ukraine and Georgia, the consensus needed to grant them MAPs remains elusive.

“I’m also saying that we are an organization of 30 nations, working by consensus. So before moving to one decision, we need to have consensus,” Geoana said. “And today we don’t have consensus on this one.”

But he also said that NATO would never accept the notion of “spheres of influence” – with “one power denying another European country which destiny [it] should choose.”

With an eye on the upcoming summit, Biden met with NATO Secretary-General Jens Stoltenberg on Monday.

A brief White House readout of the meeting was silent on Ukraine, however, and during an interaction with the press afterwards, Stoltenberg did not mention Kyiv’s membership aspirations

He did list “a more assertive Russia, responsible for aggressive actions against neighbors” among challenges facing the alliance.

Under NATO protocols instituted in 1999, a MAP is an intermediate stage in the accession process. Countries that joined the alliance after going through that step are Albania and Croatia (which entered NATO in 2009), Montenegro (2017) and the newest member, North Macedonia, which entered in March last year. Bosnia has MAP status but has yet to join.

According to opinion polls cited by the independent Ukrainian news agency UNIAN this week, 43 percent of Ukrainian respondents support accession to NATO and 12 percent oppose it.