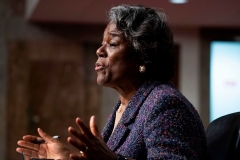 U.S. Ambassador to the United Nations-nominee Linda Thomas-Greenfield speaks during her confirmation hearing on Wednesday. (Photo by Michael Reynolds/Pool/AFP via Getty Images)

(CNSNews.com) – The State Department is reviewing the process of the Trump administration’s eleventh-hour determination that the Chinese Communist Party’s actions against Uyghurs Muslims constitute genocide, President Biden’s nominee to be ambassador to the United Nations said on Wednesday.

“I think the State Department now is reviewing that now because all of the procedures were not followed, and I think that they’re looking to make sure that they are followed, to ensure that that designation is held,” Linda Thomas-Greenfield told her Senate Foreign Relations Committee confirmation hearing.

Asked by Sen. Marco Rubio (R-Fla.) whether she believes the CCP is “guilty of genocide” in Xinjiang, Thomas-Greenfield answered carefully.

“What they’re doing there has been referred to gen – as genocide, and I know that the State Department is reviewing that as we speak.”

“What they’re doing is horrific,” she continued, “and I look forward to seeing the results of the review that’s being – that’s being done.”

“Your reticence on that answer [to Rubio] wasn’t about a disagreement about this evidence [of atrocities], correct? It’s just about making sure that we follow the process to do such a designation – am I right about that?”

On the last full day of the Trump administration, then-Secretary of State Mike Pompeo announced his determination that China’s policies in the Xinjiang region constitute crimes against humanity and genocide. “I believe this genocide is ongoing, and that we are witnessing the systematic attempt to destroy Uyghurs by the Chinese party-state,” he said.

During his confirmation hearing the same day, Biden’s nominee to succeed Pompeo, Antony Blinken, said when asked about the genocide determination, “that would be my judgment as well.”

Now confirmed, Secretary of State Blinken was asked at the State Department on Wednesday about Thomas-Greenfield’s remarks about the genocide determination.

“Today, Linda Thomas-Greenfield said the department is reviewing that determination,” a reporter said. “Is that only about the process, or are their different views on this determination?”

Blinken said he hadn’t seen Thomas-Greenfield’s remarks and so could not comment on them.

“But my judgment remains that genocide was committed against – against the Uyghurs and that, that hasn’t changed.”

In her testimony, Thomas-Greenfield did not elaborate on the charge that “all of the procedures were not followed” in the previous administration’s determination. Pompeo in fact came in for criticism for taking so long to make the announcement, and said it had been crucially important to get it right.

“There were lots of vigorous discussions all across the United States government,” he told Fox News on January 19, referring to the determination process. “We talked with people all across the world. We relied on facts that came from nongovernmental organizations, journalists, other governments, to make sure that we had everything just right. And we wouldn’t have done this if we weren’t convinced that these declarations, this determination that I have issued today, was proper.”

Genocide is defined in U.S. law as certain actions taken “with the specific intent to destroy, in whole or in substantial part, a national, ethnic, racial, or religious group as such.”