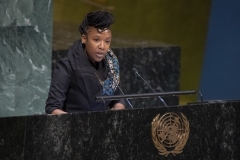 (CNSNews.com) – A U.N. expert on racism told a House Judiciary subcommittee on Wednesday that reparations for slavery form part of international obligations to eliminate racial discrimination from which the United States was “not exempt.”

“Within the international legal system,” she said, “reparations are defined broadly to include require restitution, compensation, satisfaction, rehabilitation and guarantees of non-repetition.”

“Reparations for slavery are an integral part of fulfilling the international legal mandate to eliminate racial discrimination. The United States is not exempt from these responsibilities, and H.R. 40 would represent important progress in fulfilling its obligations under international law,” she added, in reference to the legislation at the center of the hearing.

Achiume, a Zambian-born UCLA School of Law professor, was invited to testify before the Constitution, Civil Rights, and Civil Liberties subcommittee, at a virtual hearing on the contentious subject.

Sponsored by Rep. Sheila Jackson Lee (D-Texas), H.R.40 is the latest iteration of a bill that has been introduced 18 times over the past three decades, calling for a commission to be set up to examine the lasting impact of slavery, and make recommendations on appropriate remedies. This is only the third time in 14 years that a hearing has been held. The other two occasions were in 2019 and 2007. The bill this year has 162 co-sponsors, all Democrats

Achiume and other witnesses said reparations were not only about the past, but about problems persisting to this day.

“In the United  States,  the  history  of  transatlantic  slavery  has  left  an  indelible  mark,” she said. “The  continued presence of racism, racial discrimination and ideologies of racial superiority in U.S. legal, political, social and economic structures underscores the interconnection between the historical wrongs of slavery and contemporary racial injustices.”

During the virtual hearing, freshman Rep. Burgess Owens (R-Utah), the great-great grandson of a slave, argued that reparations were “not the way to right our country’s wrong.”

“It is impractical and a non-starter for the United States government to pay reparations,” he said. “It is also unfair and heartless to give black Americans the hope that this is a reality.”

“Reality is that black American history is not one of a hapless, hopeless race oppressed by a more powerful white race,” said Burgess, a retired NFL player. “It is instead a history of millions of middle- and wealthy-class black Americans throughout the early 20th century achieving the American dream.”

The theory of reparations was not new, he said.

“It’s been tried over the last 100 years, resulting in the misery and death of over 100 million men, women and children. It’s called redistribution of wealth, or socialism.”

“We’re successful. We believe in determination. And we believe in overcoming the many bad balls that we have been thrown,” she said. “We’ve caught them. And we've kept on going.”

“That is not the point of H.R. 40 – the commission to study and develop reparation proposals for African Americans,” Jackson Lee continued. “For hidden in the corners of this nation are those of African American heritage, the descendants of enslaved Africans, who have felt the sting of disparity. They continue to feel that sting. Now, more than ever, the facts and circumstances facing our nation demonstrate the importance of H.R. 40, and the necessity of placing our nation on the path to reparative justice.”

“Reparations is about undoing structures, structures of racial injustice, that are the result of legacies of enslavement,” she said. “Pointing to individuals who are black, who have succeeded, who are people of African descent, who are descendants even of slaves, and pointing to their successes, can’t negate the fact that we have persisting structures of injustice that have to be addressed – including through a reparations frame.”

During the 2020 Democratic presidential primary campaign, Sen. Cory Booker (D-N.J.) introduced for the first time a companion bill to H.R.40. Among its first eight co-sponsors were five other Democratic senators in the presidential race, including then-Sen. Kamala Harris (D-Calif.), now vice president. (Booker has this year again introduced companion legislation to H.R.40.)

At a NAACP virtual town hall last June, the then-presumptive Democratic nominee Joe Biden was asked whether he would support reparations, and said it would depend on the details, and if Native Americans would also be included.

White House press secretary Jen Psaki was asked Wednesday whether the president would sign H.R.40 if it reached his desk.

“Well, it’s working its way through Congress,” she said. “He’d certainly support a study [into reparations], but we’ll see what happens through the legislative process.”

A reporter asked why Biden would not not simply create the commission envisaged in the legislation, by executive order. Psaki pointed to executive orders on “racial equity” already issued by the president in his early days in office.