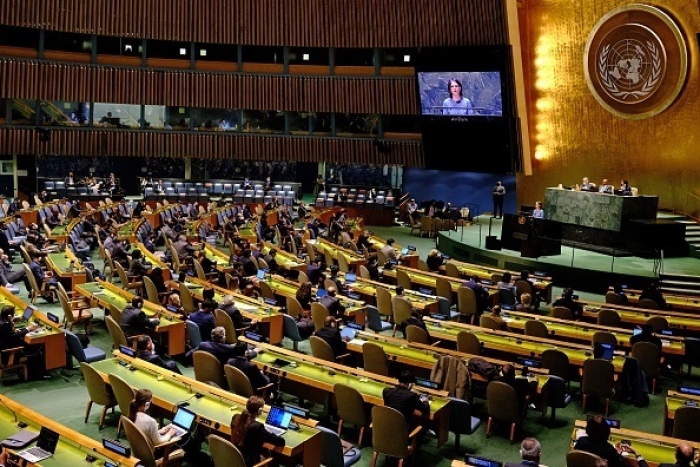 The U.N. General Assembly holds a rare emergency special session in New York on the Russian invasion of Ukraine. (Photo by Andrew Renault/AFP via Getty Images)

(CNSNews.com) – In a non-binding but strong symbolic message to Russia, the U.N. General Assembly on Wednesday passed by 141 votes to five a resolution condemning President Vladimir Putin’s invasion of Ukraine and demanding the withdrawal of his forces from Ukrainian territory.

But the resolution took no action, falling short for example of taking the step, which falls within the General Assembly’s jurisdiction, of expelling Russia from the U.N. Human Rights Council (HRC).

Another 35 member-states abstained (full list below). Among them were some close Russian allies, including Cuba, China, Iran, Sudan, Kyrgyzstan, Nicaragua, Bolivia, and Venezuela’s Maduro regime.

Some of those allies backed previous provocative actions by the Kremlin, including the annexation of Crimea (Cuba, Sudan, Nicaragua, Venezuela, Zimbabwe, Kyrgyzstan, and Bolivia) and the recognition of breakaway regions of Georgia as “independent” (Nicaragua and Venezuela).

On the other hand, abstentions also came from some democracies, including India, South Africa, and Namibia. Pakistan, a U.S.-designated “major non-NATO ally,” also abstained, and its representative referred to the principle of “indivisible security” – a Russian talking point.

Former U.S. Ambassador to the U.N., Nikki Haley, posted a screengrab of the voting record, commenting, “You are the company you keep,” and adding the hashtag #TakingNames”. 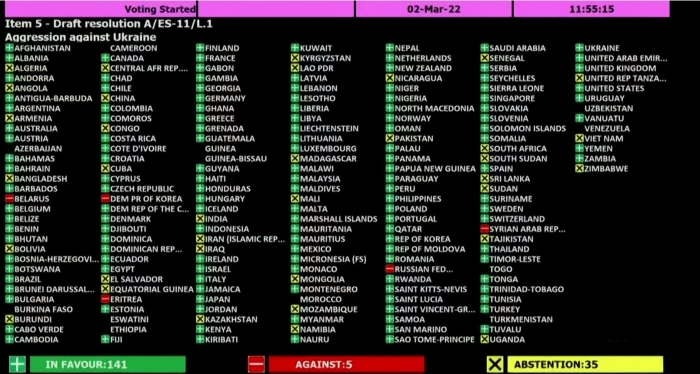 The resolution passed by 141 votes to 5, with 35 abstentions. (Image: Screengrab)

“We would have hoped that the 35 people who abstained would have voted ‘yes’ with us as well,” U.S. Ambassador to the U.N. Linda Thomas-Greenfield told reporters after the session. “So it was not our expectation, we would have hoped for more.”

Her overall tone was upbeat, however. “Together, the vast majority of the world has condemned Russia’s unprovoked, unjustified, unconscionable war,” she said.

“We have affirmed the U.N. Charter, pledged to address the horrific human rights and humanitarian crisis in Ukraine, and stood together in the battle for the soul of the world.”

Thomas-Greenfield called on the international community to “match our strong words with strong actions,” continue to support the Ukrainian people, and “demonstrate the true power and true purpose of the United Nations for all.”

“This is a global rebuke of historic proportions,” commented another former U.S. Ambassador to the U.N., Samantha Power, in a tweet after the vote. “Look not just at the YES vote total, condemning Russia, but at which countries voted in favor. Putin is isolated to an unprecedented degree. Even his longstanding partners are condemning this invasion.”

Russia’s U.N. Ambassador Vassily Nebenzia accused Western governments of cynically pressuring member-states to support the resolution, which he said would not end the war.

It was the first time in 40 years the General Assembly has held an emergency session under the so-called “Uniting for Peace” mechanism. Based on a Security Council resolution passed in 1950, it provides for an urgent General Assembly session in cases where the Security Council is not acting on matters viewed as threatening peace, because of differences among the five veto-wielding permanent members.

It has only been used 11 times since then, and the last time one was concluded was in 1982.

The text of the resolution, which had more than 90 co-sponsors, deplored Russia’s recognition of the self-proclaimed “people’s republics” in eastern Ukraine as “independent” and demanded that it reverse the decision.

Crimea, which Russia annexed in 2014, is not mentioned by name, although the text does call for Russia to “withdraw all of its military forces from the territory of Ukraine within its internationally recognized borders,” implying that that includes the strategic Ukrainian peninsula.

The text makes no reference to sanctions. Neither does it feature the words “war” or “invasion” in connection with Russia’s actions, but rather uses Putin’s term “special military operation,” albeit in quotation marks. (There is one reference to “war,” but in the context of the need to save the current European generation “from the scourge of war.”)

The avoidance of the terms “war” or “invasion” mirrors Russian state media coverage of the crisis. State media and officials in China also refer to the “crisis,” “conflict” or the “Ukraine situation,” and steer away from more direct language.

“Self-congratulation is rampant over the General Assembly res condemning Russia,” remarked Heritage Foundation senior fellow Brett Schaefer on Twitter. “The wording was strong and it is good that the vote was lopsided (141 for, 5 against). But the resolution took no action – did not even kick Russia off the HRC.  UN in nutshell.”

The 35 countries which abstained were: