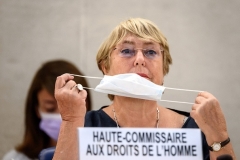 (Chinese foreign ministry spokesman Wang Wenbin said Monday the purpose of Bachelet’s visit was “to enhance exchanges and cooperation between the two sides and promote the development of international human rights cause. We are always opposed to using this matter for political manipulation.”)

(CNSNews.com) – The U.N.’s top human rights official arrives in China on Monday for a trip that has been years in the making, amid skepticism by Uyghur activists unhappy about her office’s refusal to release a report it has compiled on the human rights situation in Xinjiang.

Michelle Bachelet’s six-day visit will be the first to China by a U.N. high commissioner for human rights since 2005.

According to her Office of the High Commissioner for Human Rights (OHCHR), she will visit Guangzhou in southern China, before going to Urumqi and Kashgar, the two main cities in Xinjiang.

The sprawling region of western China, bigger than twice the size of Texas, is where the Chinese Communist Party is accused of mass-scale atrocities against Uyghurs and other minority Muslims.

The Chinese government vehemently rejects the allegations, and officials have stated repeatedly that Bachelet’s trip is a goodwill visit – “to promote exchanges and cooperation” – not an investigation.

“China has made remarkable achievements in respecting and protecting human rights in various aspects over the past few years,” the state news agency Xinhua said in a dispatch on Monday.

“China, in collaboration with the international community, is willing to contribute its wisdom and strength to global human rights governance.”

The report did not mention Xinjiang, or Bachelet’s visit.

Bachelet expressed a desire to visit Xinjiang shortly after first taking up her post in Geneva in the fall of 2018. Beijing said it would welcome a visit, but the two sides wrangled over the terms and conditions, particularly the OHCHR’s demands for independent and unfettered access.

Almost four years later, Beijing has finally allowed the visit to go ahead, three months before Bachelet’s term is due to expire.

While trying to arrange a visit, the OHCHR launched an investigation into claims of rights abuses in Xinjiang, including the mass incarceration of millions of Muslims.

Last September, Bachelet confirmed that a report on the findings was being finalized in anticipation of its public release.

But it remains under wraps eight months later, despite appeals by scores of human rights groups, U.S. lawmakers, and the U.S. Ambassador to the U.N. Linda Thomas-Greenfield, among others.

Then late last month a OHCHR spokesperson said the report would have to be sent to China for its input and response, adding to the frustrations of those calling for its release.

Now the visit is happening – with the report still not released – some Uyghur activists are not optimistic about the outcome.

“A visit without unfettered access will yield no results beyond supporting the CCP narrative that there are no human rights violations happening in East Turkistan,” said the U.S.-based Campaign for Uyghurs (CFU), using the historical name for the region China calls Xinjiang.

“Without transparency, human rights organizations are left to wonder about the trip’s validity and its ultimate goal.”

“There is also the danger of Bachelet’s visit propping up the Chinese regime’s narrative and carefully curated image of Uyghurs and East Turkistan,” the group said.

It also expressed regret about the long delay in releasing the OHCHR report.

“Without this report, the U.N. has been unable to credibly condemn China’s actions, and nations have remained unconvinced,” CFU said. “The release of the report will force the world to act and shake the international community out of its stupor.”

The reference to nations remaining “unconvinced” alludes to the fact that China over recent years has won the support of dozens of countries at the U.N. – including Islamic countries – for its denials of atrocities in Xinjiang.

In a recent letter to Bachelet, the World Uyghur Congress (WUC) and dozens of other Uyghur groups listed a number of conditions for her visit failing which, they said, it would not be credible.

Topping the list: “Release your report on human rights violations in East Turkistan immediately, and prior to your trip to China.”

The Uyghur groups said Bachelet must ensure that her team has “full, unhindered access to all areas in East Turkistan,” including freedom of movement, access to detention facilities and confidential and unsupervised contact with Uyghurs, including those held in detention.

They urged Bachelet to ensure the Chinese authorities are not given control over her access to places, people, or documentation.

When allegations of mass incarceration in Xinjiang first emerged in 2017, Beijing denied the existence of internment camps. Later it acknowledged having set up what it called vocational and training facilities, as part of a broader campaign to combat the “three evils” of terrorism, separatism and religious extremism.

The Biden and Trump administrations both determined that CCP atrocities reported in Xinjiang, including mass detentions, forced labor, and allegations of forced sterilization, amounted to crimes against humanity and genocide.

Uyghurs are Turkic-speaking Muslims whose traditional homeland of East Turkistan was briefly independent in the 1930s and 1940s, before falling under communist Chinese rule in 1949.