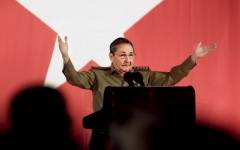 (CNSNews.com) – The U.N. Human Rights Council has extended for three years the work of an “independent expert on human rights and international solidarity,” a vote highlighting again differences between liberal democracies and autocracies in the controversial Geneva-based body.

Cuba’s communist government was the driving force behind the extension of the mandate, which was first created at Cuba’s initiative 15 years ago. The current occupant is Obiora Okafor, a Nigerian-Canadian law professor at Toronto’s York University.

Extending his mandate for another three years will cost the HRC around $1.34 million ($448,000 a year), covering his travel, including trips to the council in Geneva and two 10-day “country visits” a year, documentation, translation, and support staff.

The resolution passed late last week calls on all governments, U.N. agencies and international organizations and NGOs “to mainstream the right of peoples and individuals to international solidarity into their activities,” and to cooperate with the expert in his mandate.

Western democracies – including the U.S. before the Trump administration withdrew in repugnance from the HRC in 2018 – generally view “international solidarity” as a nebulous concept in the human rights field, and one that merely diverts attention and resources away from issues they believe the council should focus on, such as violations of freedom of speech and religion.

Not coincidentally, U.N. member-states most supportive of the “international solidarity” mandate are those with poor human rights records at home.

The Cuba-led resolution was co-sponsored by likeminded allies including China, Nicaragua, Belarus, Qatar, the Assad regime in Syria, the Maduro regime in Venezuela, and the “State of Palestine” (which although neither a sovereign state nor a U.N. member-state is permitted to cosponsor resolutions.)

European Union members tried to push back, but 47-member HRC passed the resolution by 30-15, with one country, Mexico, abstaining.

The vote came on the same day Secretary of State Mike Pompeo was launching the first draft report by his year-old Commission on Unalienable Rights. Drawing attention to a “proliferation of rights,” he called for a return to what he called “foundational, unalienable rights that we are bound to protect.”

Ahead of the vote in Geneva, Cuban representative Lisandra Astiasaran Arias said, “Our goal must be to contribute to solving the problems of the current world through greater cooperation and through greater solidarity, and to create the necessary conditions to ensure that the needs and the interests of future generations are not jeopardized by the mistakes and the selfishness of the past,” she said.

Speaking for the E.U. members, Germany’s Michael Freiherr von Ungern-Sternberg said while the bloc supports the notion of international solidarity as a “moral principle,” matters falling outside the legal and human rights scope should be considered at alternative venues.

“Serious conceptual doubts continue to exist about whether the principle of ‘international solidarity’ can be meaningfully translated into the language of human rights standards,” he said.

Mexican representative Socorro Flores Liera, explaining the decision to abstain, said “‘international solidarity’ is not an underlying founding principle under international law, because there is no legally agreed-to definition.”

Masked delegates at the U.N. Human Rights Council session in Geneva which ended on Friday. (Photo by Fabrice Coffrini/Pool/AFP via Getty Images)

One of the most activist members of the HRC, Cuba has long used the forum to promote so-called “third-generation” rights such as “international solidarity” the “right to development,” and the “right to peace.”

During a previous mandate-extension discussion, the Cuban representative said “international solidarity” was of extreme importance, especially for developing countries most affected by the consequences of an “unjust and unequal” international order.

A related Cuban priority at the HRC has been the mandate of “independent expert on the promotion of a democratic and equitable international order.”

When that mandate was first created, in 2011, European HRC members suggested the Cuban-drafted resolution be amended for clarity, and refer to such “essential elements of democracy” as genuine and free elections, and guarantees of freedom of expression and association.

Cuba rejected the proposed amendments as an attempt to impose an “Anglo-Saxon” order on the world. Backed by its allies, Cuba got the mandate endorsed, and it continues to this day.