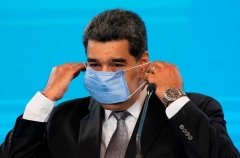 (CNSNews.com) – The U.N. Human Rights Council on Monday gave Nicolás Maduro a platform to condemn U.S. sanctions policies, prompting a Republican senator to call on the Biden administration to press for Venezuela’s expulsion from the council and to suspend funding to the U.N. “until we can reassure American taxpayers that they are not funding an organization that turns a blind eye to the atrocities perpetrated by these regimes.”

Sen. Rick Scott (R-Fla.) said that in the absence of such a response from the administration, his colleagues should take that into account when voting Tuesday on President Biden’s nominee for ambassador to the world body.

Linda Thomas-Greenfield’s confirmation has faced some headwind, due to concerns about her approach towards China. It passed the Senate Foreign Relations Committee in an 18-4 vote early this month, and a full Senate vote has been set up for tomorrow morning.

Now Scott is seeking to link that vote to Maduro’s participation at the HRC, a controversial body which the administration has chosen to re-engage with after its predecessor withdrew in 2018.

He said Biden and Thomas-Greenfield “must immediately call on to the U.N. to rescind Venezuela’s seat at the table and refuse to participate in any session that provides a platform to murderous dictators. They also need to rethink their decision to rejoin the disastrous U.N. Human Rights Council.”

“Should the administration stay silent on this today, I urge my colleagues to strongly consider that cowardice as they vote [on the nomination]. It’s time for the United States to unapologetically stand for human rights and hold all who don't fully accountable.”

Almost one-third of the 193 U.N. member states do not recognize the regime, whose socialist policies and brutal crackdown on dissent have transformed the once oil-rich nation into an economic basket case.

The U.S. in 2020 indicted Maduro for narco-terrorism, offering a $15 million reward for information leading to his arrest and/or conviction.

One of just ten heads of state or government to address the council’s largely virtual session in Geneva on Monday, Maduro was accorded full diplomatic courtesies as he prepared to speak.

“I now have the honor to give the floor to his excellency, Mr. Nicolás Maduro Moros, president of the Bolivarian republic of Venezuela,” said HRC president Nazhat Shameem Khan, the ambassador of Fiji. “Your excellency, you have the floor.”

Speaking through an interpreter for a little over ten minutes, Maduro railed against sanctions put in place against his regime by the U.S., European Union and some regional countries.

“Those who have abducted the Venezuelan state’s asserts and resources have shown great cruelty,” he said. “They have stepped up economic acts of aggression, thus triggering a humanitarian crisis.”

In 2019, the HRC established an independent fact-finding mission to investigate allegations of extrajudicial executions, torture and other abuses in Venezuela. The regime refused to cooperate.

A report delivered by the mission a year later cited torture, sexual violence, and extrajudicial executions, with some abuses amounting to “crimes against humanity.” The mission also explained that it had to carry out hundreds of remote interviews with individuals in Venezuela, “due to the government’s failure to respond to repeated requests” for a visit.

Maduro was unrepentant about barring the fact-finding mission.

“We will not accept the interference or intervention of any inquisitive mechanism against our fatherland – a mechanism which would usurp the just cause of human rights as a political tool in order to bring about a change of government,” he said.

By contrast, Maduro did allow another HRC-mandated expert to visit, but in that case the focus of the mandate was the negative consequences of “unilateral coercive measures” – U.N. jargon for sanctions. Maduro stressed that after a recent visit, the expert had called for the sanctions to be lifted.

Of the 47 members of the HRC this year, only 19 (40.4 percent) achieve a “free” grade from Washington-based Freedom House, which assesses countries’ civil liberties and political freedoms every year.

In addition to the Maduro regime, other current members that are “not free” are China, Russia, Cuba, Uzbekistan, Bahrain, Cameroon, Eritrea, Gabon, Libya, Somalia, and Sudan.

Also on the council are two countries ranked “partly free” by Freedom House – Pakistan and Mauritania – which were elected onto the HRC despite both having the death penalty for “blasphemy,” and in the case of Mauritania, being home to one of the world’s worst modern-day slavery situations.