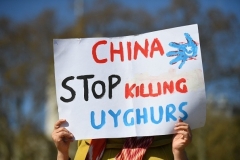 A pro-Uyghur demonstration in London. (Photo by Justin Tallis/AFP via Getty Images)

(Update:  A spokesperson for U.N. high commissioner for human rights Michelle Bachelet said in response to queries she had been unable to attend the Xinjiang event due to prior engagements, adding that high commissioners “usually do not participate in country-specific side events organised by states and/or NGOs.”

The spokesperson said Bachelet “has expressed serious concerns about the human rights situation in Xinjiang on several occasions, and sought access to Xinjiang to verify these allegations. The Office continues to engage with the Chinese authorities on the modalities for such a visit. Meanwhile, we continue to gather and analyse relevant information and follow the situation closely.”)

(CNSNews.com) – The Chinese state’s treatment of minority Uyghur Muslims in Xinjiang came under scrutiny at an event sponsored by several Western missions to the U.N. on Wednesday, but also in the firing line was the world body itself.

One participant accused both the U.N. secretariat and its human rights apparatus of “silence, fear and timidity” in the face of pressure from Beijing.

China’s efforts to stymie the event were noted by some speakers, with German ambassador Christoph Heusgen referring to “the pressure exerted on many of us” and thanking the missions that agreed to co-sponsor “despite some massive Chinese threats.”

China’s mission earlier sent messages to member-states asking them not to take part in the event being led by the U.S., Britain, and Germany, and calling on those planning to support it to reconsider.

Those that did despite the pressure were Albania, Australia, Austria, Canada, Denmark, Estonia, Finland, Iceland, the Netherlands, Norway, Latvia, Lithuania, New Zealand, Slovakia, and Sweden.

Although the virtual event was recorded on the U.N.’s webcast system, neither the secretariat nor the Office of the High Commissioner for Human Rights (OHCHR) was represented.

Western governments and rights advocacy groups say crimes against humanity are being committed on a mass scale in Xinjiang. The U.S. has determined that they constitute genocide.

During a panel discussion, Amnesty International Secretary-General Agnes Callamard challenged the U.N. leadership over its approach to the situation in Xinjiang.

“The silence, fear and timidity of the OHCHR and U.N. secretariat are frankly unacceptable and a breach of their mandate, as are the silence of many states,” she said.

“Silence, heads in the sand, and unseemly concessions embolden China, tarnish the U.N. rights system, weaken the U.N. overall, and betrays our duty to the people of China,” Callamard said.

“Supporting a multilateral response to what is happening in Xinjiang is not about picking sides in a fight with China or supporting the U.S. or anyone else,” she said. “It is about fighting for human rights.”

Callamard also called for the U.N. Human Rights Council to “be bold” and hold a special session or urgent debate in Xinjiang, to adopt a resolution setting up an international investigation into the situation there.

(The HRC has held 29 “special sessions” during its 15-year history, but none has been held in response to situations in China – or Russia, North Korea, Iran, Venezuela, Cuba, or Saudi Arabia. Eight have dealt with Israel, five with the Syrian civil war, and three with Burma.)

At a press briefing in New York U.N. spokesman Stephane Dujarric was asked about Secretary-General Antonio Guterres’s view on the event, given China’s opposition to it being held.

“Does he think it was important to be held or if it was a provocation?” a reporter asked.

“Look, member-states hold events here all the time,” Dujarric replied. “This is part of what the U.N. is all about. It’s not for the secretary-general to opine on events organized by member-states.”

Guterres is on a visit to Russia. Asked about the non-participation of the office of U.N. high commissioner for human rights Michelle Bachelet, Dujarric said he understood it had received an invitation but “she was unable to attend.”

Bachelet’s office did not respond by press time to queries about the invitation, or about the criticism directed at the OHCHR during the event.

Addressing the event, Britain’s Ambassador to the U.N. Barbara Woodward described the situation in Xinjiang as “one of the worst human rights crises of our time.”

“There are incredible reports, and credible reports, that many Uyghur people and other ethnic and religious minorities – who only wish to practice basic freedoms of religion, belief, expression, and movement – are being forced to work until they drop, manufacturing clothes and goods at the behest of the state.”

“We will keep standing up and speaking out until China’s government stops its crimes against humanity and the genocide of Uyghurs and other minorities in Xinjiang,” Thomas-Greenfield said.

“And we will keep working in concert with our allies and our partners until China’s government respects the universal human rights of all its people.”

The Chinese mission said in a statement the event “was full of lies and disinformation, and was another poor show by the U.S. and a few other countries, further exposing their political attempt to use Xinjiang to create mess in and contain China.”

A mission spokesperson said the three main sponsors of the event should do “some soul-searching,” citing the killing of “countless innocent Muslims” in Iraq, Syria and Libya,” Britain’s history of colonization, and the Holocaust.